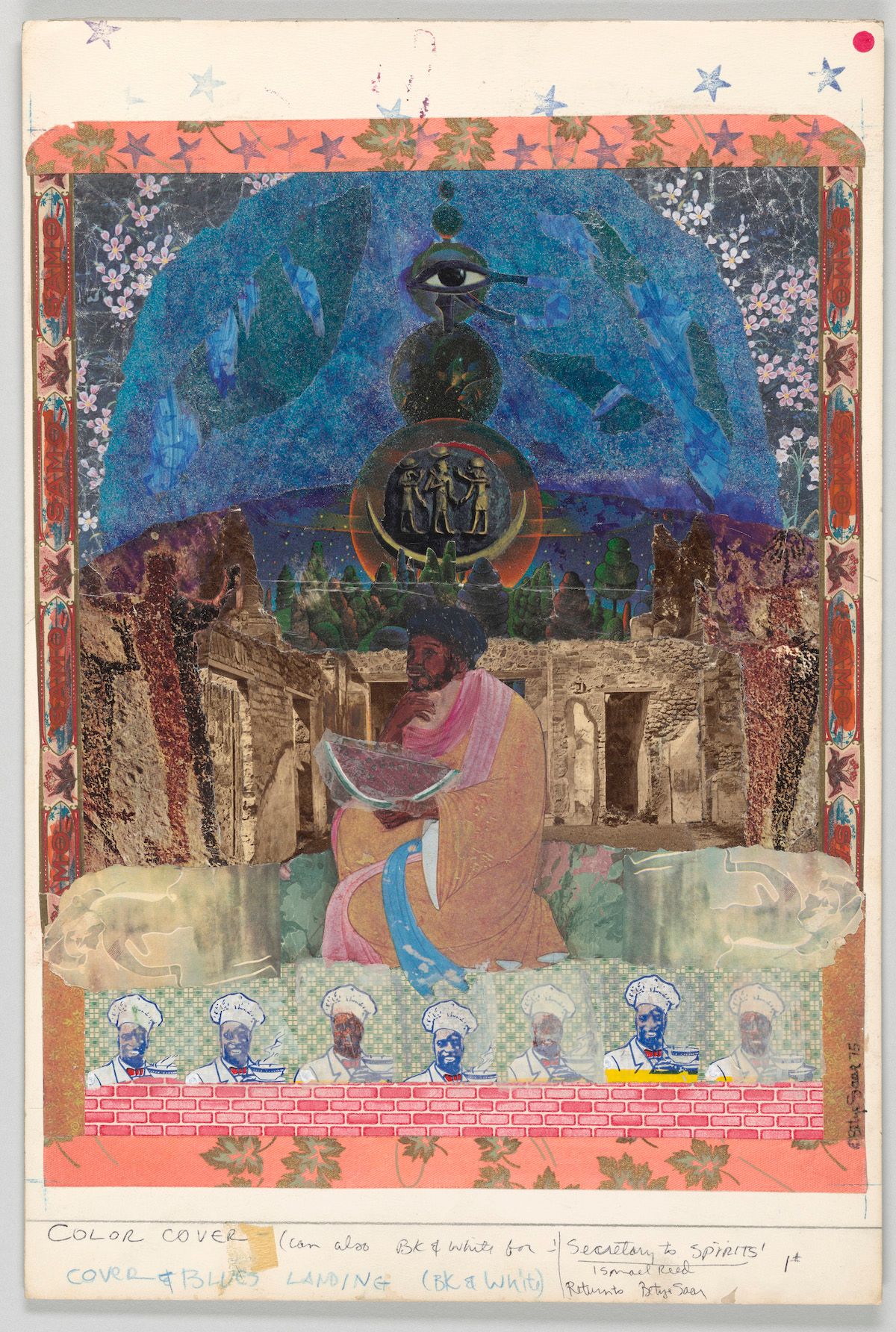 Betye Saar: Call and Response at the Morgan Library and Museum (until 31 January 2021) presents more than a dozen of Saar’s rarely-seen and bewitching travel sketchbooks, which she produced while in destinations like Haiti, Taiwan and Brazil. The show explores the connection between these preliminary sketches and artist’s finished drawings, sculptures and collages, spanning more than four decades of her career. The show travels from the Los Angeles County Museum of Art but contains a sculptural installation made specifically for the Morgan Library, in addition to never-shown collages from the museum’s collection. Additionally, the museum has acquired six collages from the show, including A Secretary to the Spirits (1975)—one of the pieces commissioned by the American poet Ishmael Reed for his 1975 book of poems of the same name. The series and other works in the exhibition point to Saar’s spiritual mysticism, containing palmistry charts and stars and moons. The exhibition follows Saar’s major retrospective at MoMA, called The Legends of Black Girl’s Window, which closed in January of this year and focused on Saar’s work as a printmaker.

The artist Rivane Neuenschwander’s exhibition Tropics: Damned, Orgasmic and Devoted at Tanya Bonakdar Gallery (until 23 October 2020) features tapestries, paintings, drawings, mixed-media works and installations made from found materials that explore themes of violence, sexuality and politics, particularly as it relates to socioeconomic circumstances in the artist’s native Brazil. Works like Fear (2020), which were produced before the global health crisis hit, still resonate with the post-colonial government’s subjugation of marginalised people during the Covid-19 pandemic, while others, like À Espreita (2020) reference ideas tied to Afro-Brazilian religions, which have been historically oppressed in the country. The artist, who is based in São Paulo, was featured in MoMA’s reopening exhibition Surrounds: 11 Installations last year; her conceptual work Trabalho dos Dias (1998)—an environment made from hundreds of adhesive contact sheets that create a large dust trap, which visitors unwittingly contribute to—suggests “a wish to understand the fragility of life [...] or the simple observation of the passing of time”, the artist said.

Judd at the Museum of Modern Art (until 9 January 2021) is the first survey devoted to Donald Judd’s work to be organised in the US in more than three decades, and features 70 works dating from 1960 to 1992. The exhibition, which closed early due to the Covid-19 pandemic and has only just recently re-opened, begins with two flat untitled paintings from 1960 and 1961, made just before a pivotal turning point in the artist's career; by 1962, Judd’s paintings were encompassing three-dimensional objects, and later that year he produced a freestanding wooden sculpture in cadmium red to which a black metal pipe was affixed. Soon he was fashioning stacks of rectangular lacquered modules that project from the wall, which are now iconic within the cannon of minimalism. Although Judd designed and commissioned multiple iterations of his forms, the exhibition demonstrates that he continually changed the dimensions of the works as well as the materials. The show subverts the common misconception that Donald Judd’s work is relatively simple—in essence, a wholly consistent progression of sculptures of geometric stacks, boxes and furniture. Ann Temkin, MoMA’s chief curator of painting and sculpture, argues that the artist’s oeuvre is in fact strikingly experimental and subject to change as well as continuity.