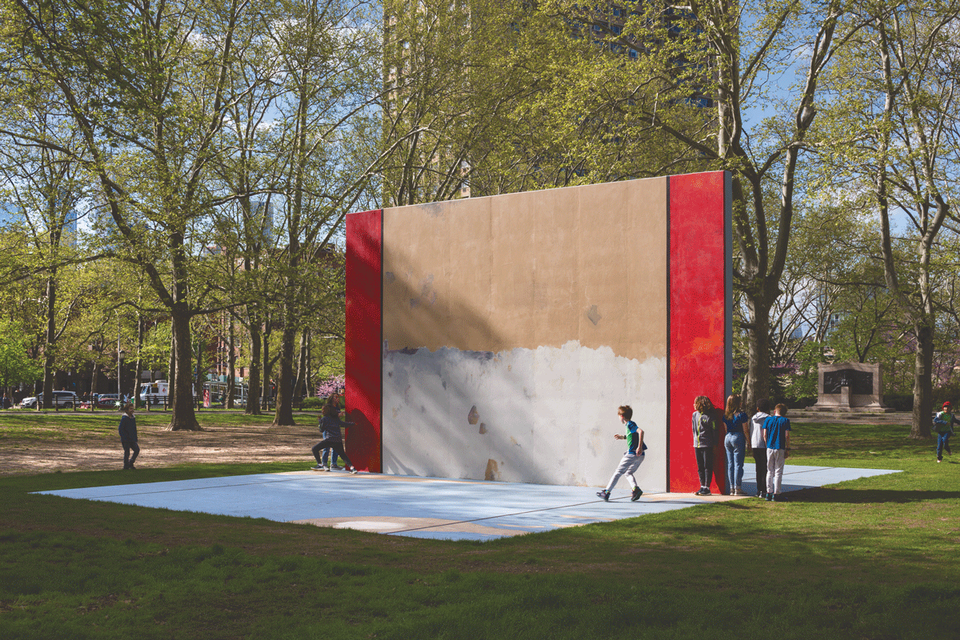 A usable handball court? A large-scale abstract work? The Belgian artist Harold Ancart’s Public Art Fund commission Subliminal Standard (until 1 March 2020), in Cadman Plaza Park in downtown Brooklyn, can be both. “I hope it’s going to be a contemplative object that is just going to come out of nowhere,” the artist says. He has painted all four vertical and horizontal planes of the wall and base, evoking the game’s lines of play while presenting his own slightly surreal riff on handball’s naturally occurring abstractions. The public can engage with it as they wish. Since it is not a regulation court, people “might play a modified version of handball”, says Daniel Palmer, an associate curator at PAF. “But I think it would be really beautiful if someone uses it as a bandstand or has a dance performance on it, or kids kick their soccer ball against it or play tag against it.”

It would be hard to walk by the Africa Center in Harlem and not stop to look at All Power to All People (until 7 July), a 25 ft-tall sculpture of an Afro pick created by the US conceptual artist Hank Willis Thomas. It is “representative of important elements of our history and culture”, Thomas said at the unveiling on 12 April. The sculpture, which features a handle outlined like a raised clenched fist, evoking the Black Power gesture, aims to frame the object as a symbol of an era, a political emblem and a signature of cultural identity. Look for the peace sign nestled within the concentric circles above the comb’s teeth. The work was first installed at Burning Man in 2018 and now sits “just 20 blocks from where I grew up”, the artist said. The installation was produced by Marsha Reid of the Kindred Arts Cultural Equity Initiative and built by the sculptor Jeff Schomberg.

Head inside to Tina Kim Gallery to see the ultimate version of “site-specific work” in a solo show of the Korean artist Kim Yong-Ik, Speaking of Latter Genesis (until 15 June). The artist spent four days making the abstract works on site—not just on the canvases, but the white-cube gallery’s walls as well. Kim used a motif of polka dots that has been in his work since the 1990s, placed sparingly in neat lines or all alone on white unframed canvases, and has brought the perfect black or orangey-red circles onto the walls, giving an orderly sense of flow. Some circles are cropped in a clean row at the edge of canvases or where the wall meets the ceiling, or wrap around a corner or a doorway in an asymmetrical fold, or continue beyond the canvases as outlines. Other more tempestuous works have painterly, wide brushstrokes of colour, with the stacked perfect circles as negative space. If you’re looking to buy, you can either snap up canvases individually or as a full wall installation, to be recreated on-site.