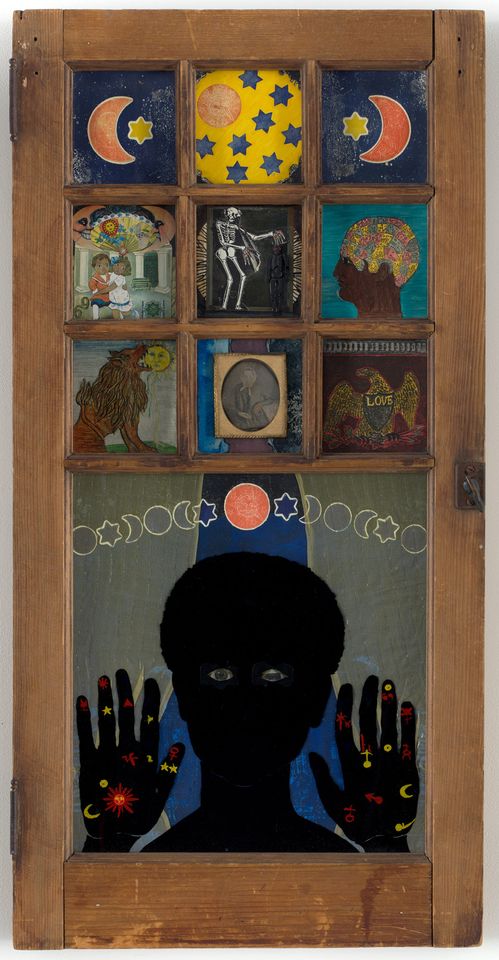 The revamped Museum of Modern Art (MoMA) reopened this week with temporary exhibitions including Betye Saar: The Legends of Black Girl’s Window (until 4 January 2020). The first show devoted to the 93-year-old artist’s work as a printmaker, the exhibition comprises more than 40 rarely seen works on paper. The centrepiece, Black Girl’s Window (1969), is an autobiographical assemblage: A silhouette with vibrant blue eyes is crowned by nine vignettes with motifs that invoke mysticism and the artist’s African-American heritage, such as a representation of Saar’s astrological sign and other symbols. The artist, who once said that windows represent a means of travelling from one level of consciousness to another, created the work using a repurposed wooden window frame, paint, collaged printed and painted papers, a daguerreotype, a lenticular print and a plastic figurine. All of the works in the exhibition have entered MoMA’s permanent collection, in line with its goal of boosting its holdings of works by African-American artists. Saar is also currently the subject of a major show at the Los Angeles County Museum of Art titled Call and Response (until 5 April 2020).

Illusions of the Photographer: Duane Michals at the Morgan Library and Museum (until 2 February 2020) is the first retrospective devoted to the New York-based artist, who is best known for his “fictionettes”, or inscribed conceptual photo sequences. The show covers six decades of Michals’s career, presenting various series and stand-alone photographs—most of which are poetically incised—alongside objects, books and works of art the artist selected from the museum’s permanent collection. Among the highlights of the exhibition are images from the artist’s 1981 book A Visit with Magritte, which Michals captured in 1965 when he spent a summer with the artist in Brussels, as well as Goethe’s quill pen and illustrations by William Blake. The museum will screen a series of the artist’s short films—his preferred medium since 2015—throughout the duration of the exhibition and will hold a panel with the artist on 25 October.

It’s the last weekend to see Alicja Kwade: Parapivot at the Metropolitan Museum of Art (until 27 October), the museum’s annual Iris and Gerald Cantor rooftop garden commission. In her first US museum presentation, the Polish-German artist has created a site-specific sculpture that aims to evoke the depths of cosmos and the “ballet of rotations and evolutions of the solar system”, says the curator, Kelly Baum. The work, which is made up 12 ft-tall interlocking steel rectangles that support painted steel and marble stone spheres reminiscent of the planets, competes with the Manhattan skyline, framing and echoing the form of the surrounding buildings. Kwade has become well-known for works that are informed by science and philosophy. The Berlin-based artist is also the subject of two major exhibitions outside New York: Moving in Glances at the Dallas Contemporary (until 22 December) and In Between Glances at the MIT List Visual Arts Center in Massachusetts (until 5 January 2020).