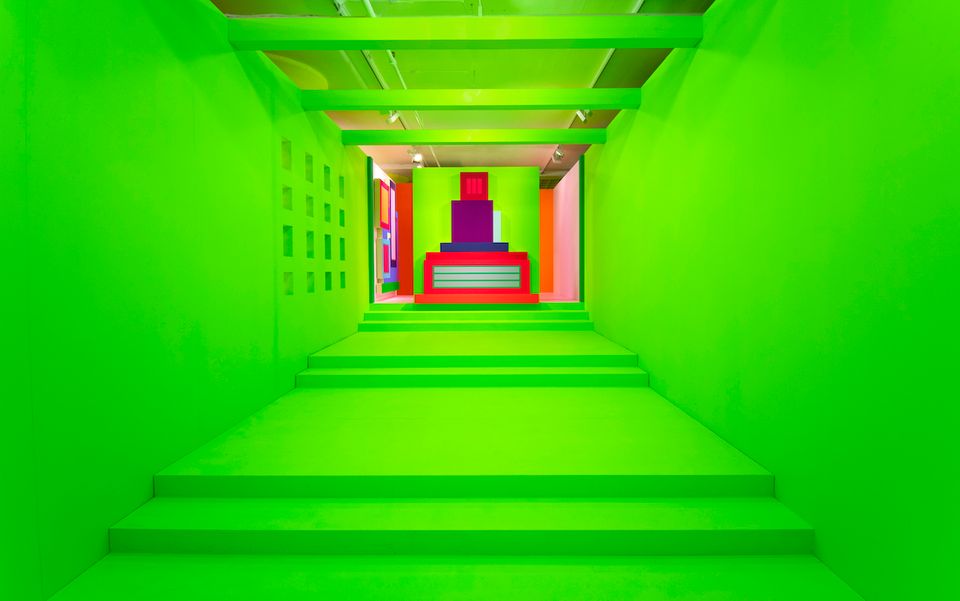 Peter Halley: Heterotopia II at Greene Naftali (until 20 December) is a wildly intricate fun house-like exhibition that immerses the viewer in a labyrinthine neon sanctum. The artist, who is best known for his bright geometric compositions, has created a space that visitors can traverse, with each room coloured in fluorescent palettes that vibrate with saturated intensity. It feels like walking through one of the artist’s abstract day-glo paintings. The show is titled after a word coined by the philosopher Michel Foucault in his essay Des Espaces Autres (1984) to be used in opposition to the idea of “utopia”. Whereas a utopia is an unrealised ideal, a heterotopia is a real space that are a disturbance to or contradiction of everyday life. Halley’s heterotopia, on the other hand, is a space of decadent exploration.

Rachel Harrison: Life Hack at the Whitney Museum of American Art (until 12 January 2020)—the American artist’s first major museum survey—traces the development of Harrison’s career, with more than 100 works from the 1990s to the present, including installations, sculptures, photographs and drawings. Harrison is best-known for her vibrant sculptures that use salvaged materials and often amusingly mix politics and pop culture. Among the most memorable works and a centerpiece of the exhibition is the humourous anti-monument Alexander the Great (2007), in which a naked mannequin in a star-studded cape and holding a waste bin, stands awkwardly atop an amorphous pedestal.

Space Poetry: The Action Paintings of Michael West at Hollis Taggart (until 21 December) rewrites the male-dominated Abstract Expressionist movement. Often reduced to a footnote in most art history books for her intense relationship with fellow painter Arshile Gorky—she actually declined his marriage proposal because she wanted to focus on her own art career—West (born Corinne Michelle West) played a formative role in the discourse and innovation that shaped one of the most pivotal American art movements: Abstract Expressionism. She referred to her painting style as “new mysticism”, however, and penned several essays in the 1940s that explore the interconnectedness of all things. Her gestural, bold paintings are a product of her personal philosophy that the relationship between global events and individual creative processes could yield a greater awareness of collective “spirit”.