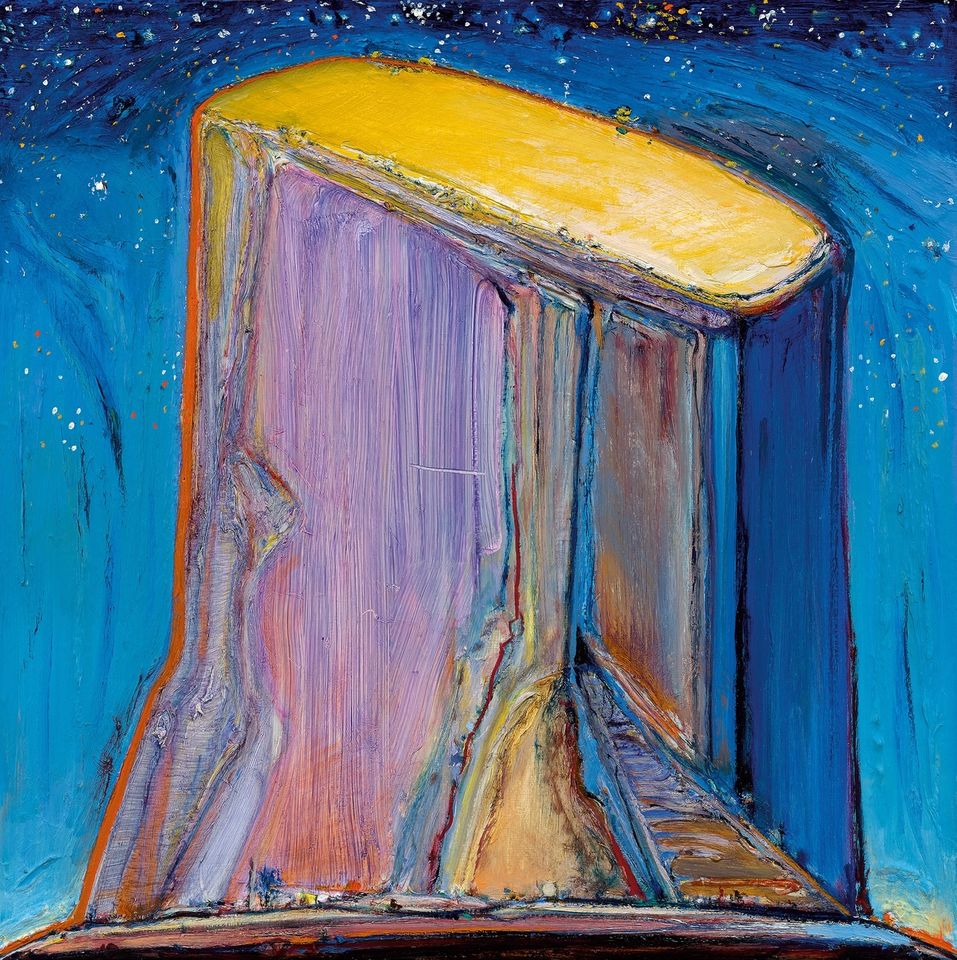 Wayne Thiebaud: Mountains 1965-2019 at Acquavella Galleries (until 13 December) presents a lesser-known part of the American painter’s oeuvre. The show brings together 33 vibrant works that depict the Sierra Nevada mountain range and its erosional valleys, which are rendered with a psychedelic fusion of colours that convey the grandeur of the Southwest landscape. The Sacramento-based 98-year-old artist, while best known for his cheerful paintings of desserts and other everyday subjects, has consistently produced remarkable landscapes since the 1960s. “While it wouldn’t be accurate to call Thiebaud’s landscapes, cityscapes and riverscapes ‘overlooked’, we felt it was time to give visitors the opportunity to explore this vast area of his practice in greater detail,” says the gallerist Eleanor Acquavella Dejoux. “In recent years, the mountains have become more of a central focus for him, but they have been the least widely exhibited of all his subjects.”

Alan Michelson: Wolf Nation at the Whitney Museum of American Art (until 12 January 2020) presents four works by the New York-based artist. The presentation, however small, packs a punch. Michelson, a Mohawk member of the Six Nations of the Grand River, “poetically foregrounds Indigenous models of thought about the environment and social relationships”, says the museum's senior deputy director Scott Rothkopf. The centrepiece of the show, which has entered the Whitney’s permanent collection, is the meditative video Wolf Nation (2018). The work depicts a pack of red wolves, a critically endangered species, and asks the viewer to “tune in to their presence and consider our relationship to them”, says the curator Chrissie Iles. Visitors can download an interactive app to view two augmented reality pieces, including the work Sapponckaikan (Tobacco Field) (2019)—in which tobacco plants fill the museum’s lobby. “We feel strongly about our commitment to feature more Indigenous artists in our collections and exhibitions, and you can expect to see more here,” Rothkopf says.

A Bridge Between You and Everything: an Exhibition of Iranian Women Artists at the High Line Nine (until 24 November) brings together the work of 13 artists who began their practice in the aftermath of the 1979 revolution in Iran. The show, curated by the Iranian photographer and film-maker Shirin Neshat in collaboration with the US non-profit the Center for Human Rights in Iran (CHRI), aims to “enlighten international audiences to the abundance and exceptional talent of women Iranian artists”, says Neshat, and to raise funds for the organisation, which works to protect basic rights and freedoms in Iran and to promote cultural tolerance and understanding. “These works contribute significantly to the contemporary art world at large, but the lives and artistic visions within each work reflect aspects of Iranian history, which has determined the destiny of Iranian lives, including that of the artists,” Neshat says. At the opening on 6 November, a private portrait session with Neshat was auctioned along with the works in the exhibition to benefit the CHRI’s arts, culture and disability rights programme. The auction of works runs online through 20 November.