Three winter art walks you can enjoy in England this weekend

It's the most wonderful time of the year—save for the global pandemic, a looming recession and the whiplashing closures of art institutions across the nation. But despite this existential tumult, there is art still to be enjoyed in the great outdoors. And while public sculpture might often get a bad rap, during this most unfestive of holiday seasons, it is all we have left—and some of it is rather wonderful. So to get you into the holiday spirit, here are three winter art walks you and your support bubble can enjoy in England. All you need is a coat, sturdy shoes and, of course, a mask. 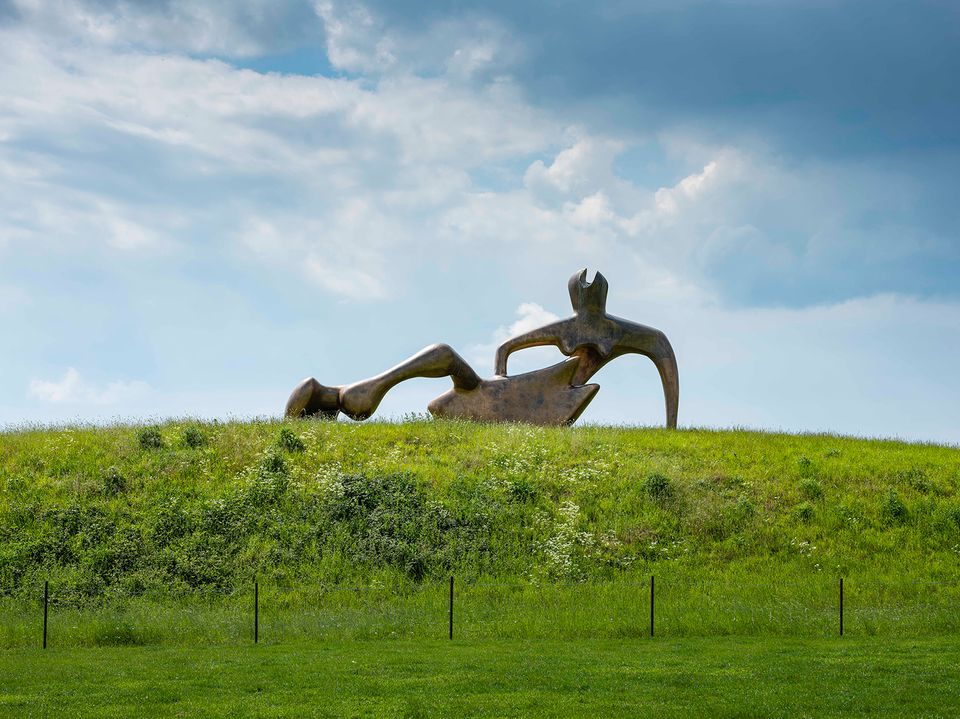 When Henry Moore and his wife Irina settled at the 17th-century farmhouse Hoglands in 1940 following the bombing of their London flat, he intended for them to stay there only for a few months. But so captured was he by the tranquility of the East Hertfordshire landscape that he would come to call it home for the next 40 years. Today, the gardens that surround the house and its neighbouring studio have been given over to the Henry Moore Foundation and, for the first time ever, will remain open during the winter period to provide the public with socially distanced interactions with some of Britain's most revered Modernist sculptures.

Visitors can now book tickets to wander around the 72-acre parkland that contains many of Moore's most notable works including the looming Large Reclining Figure (1984), situated atop a rolling hill and Family Group (1949)—a tender symbol of resilience dedicated to the collective post-war efforts of families and communities to rebuild the nation. These, along with 20 other pieces, are dotted among the bucolic scenery that Moore himself would stroll in between studio sessions so as to regroup and gain inspiration from the awesome, healing powers of nature. 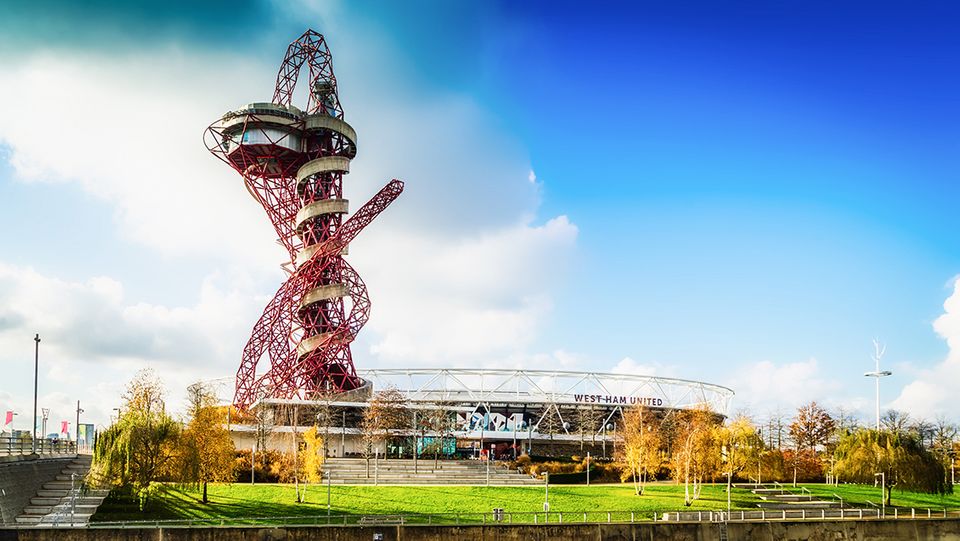 Tracing the prime meridian for around five miles from the Olympic Park to Greenwich, London's first dedicated public sculpture walk The Line ties together a healthy balance of towering man-made monuments with subtler investigations into the hidden histories of the local areas. Begin your journey from Anish Kapoor's ArcelorMittal Orbit (2012)—a defiantly red, spiralling helter-skelter that claims the title of the UK's tallest sculpture—before stopping at Abigail Fails's DNA DL90 (2003)—a double helix of shopping trolleys which, beneath its whimsical surface, hints at the deep entrenchment of consumerism in contemporary society.

Further highlights include Larry Achiampong's site-specific audio work within the cable cars that transport you across the River Thames, which uses oral histories to respond to the legacies of the former British Empire on the areas along the Docklands; and Alex Chinnek's precariously balanced A Bullet From a Shooting Star  (2015), which resembles an inverse electric pylon and pays tribute to the Greenwich Peninsula's former life as the home of Europe's largest oil and gas tanks.

And to ensure you don't take a wrong turn and end up in Canary Wharf, The Line has partnered with Bloomberg Connects to provide an interactive guide that maps out your route and gives you accompanying information on each work, commentary from experts and virtual activities to experience at your own pace. You can access the guide by downloading the app. 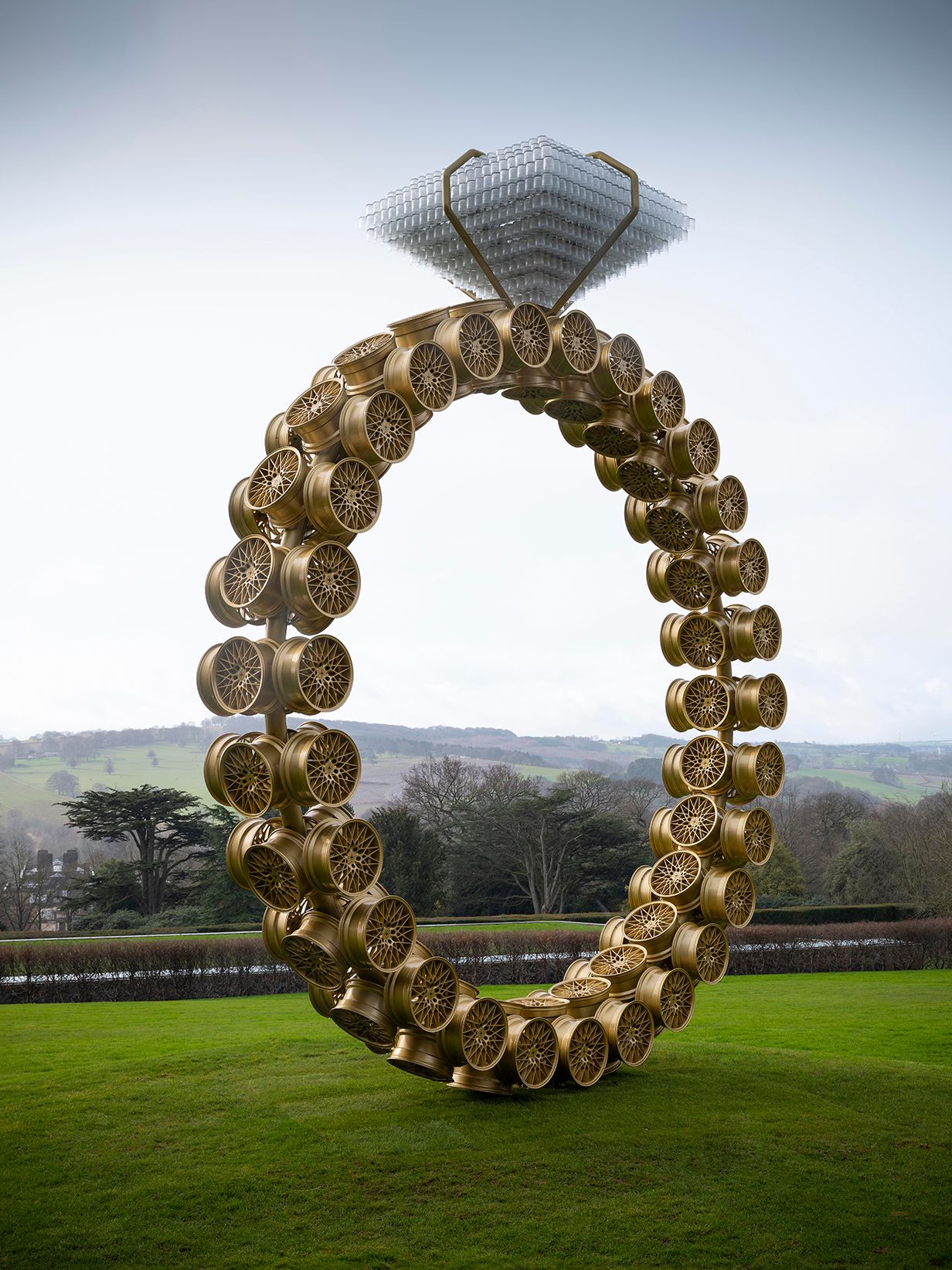 The Portuguese artist Joana Vasconcelos is on show at the UK's oldest sculpture park for Beyond (until 9 January), an exhibition of six works that uses the venue's dramatic backdrop to create a conversation between her irreverent, monumental pieces and the mutable and reverential qualities of nature. Among these is Solitário [Solitaire] (2018), a seven-metre-high ring made of golden car wheel rims topped with a huge diamond crafted from crystal whisky glasses. Situated at one of the park's highest points, it allows breathless viewers to ponder the trappings of material possessions and luxury goods while taking in sweeping views across the Yorkshire Dales. Also on show around the park's two lakes, woodlands and formal gardens are around 100 other works by artists including Damien Hirst, Alfredo Jaar and Barbara Hepworth.