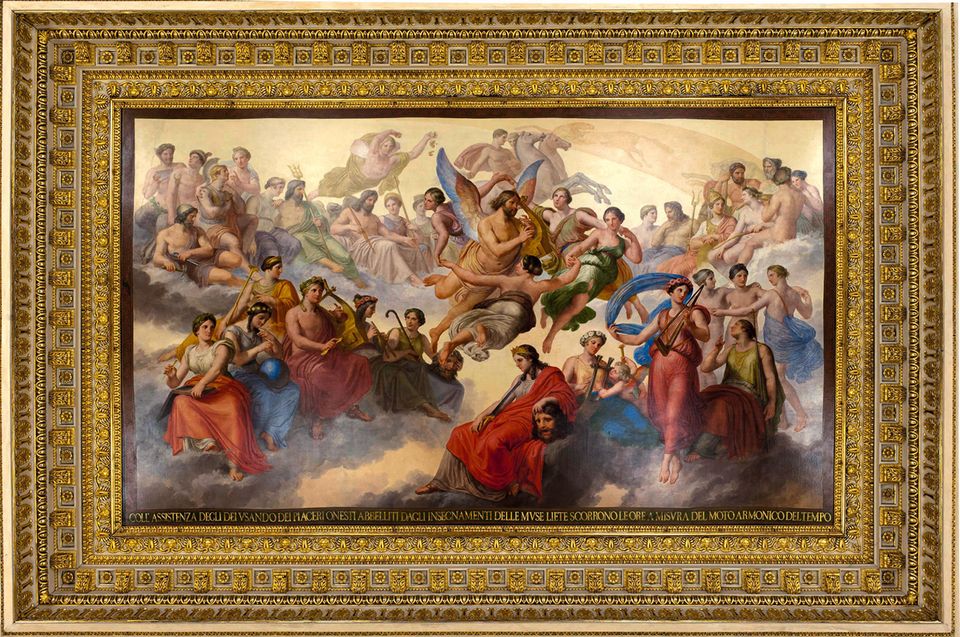 This monograph by Bertrand de Royere is a scholarly and well illustrated book on Pelagio Palagi (1775-1860), perhaps Italy’s greatest interior decorator. It covers his work at the Palazzo ReItalyale in Turin and the royal residences outside at Racconigi and Pollenzo for King Carlo Alberto (reigned 1831-49). The main text supplies an account of Palagi’s life and times, his sources and his place within the European context, as compared, say, with Von Klenze at the Residenz at Munich or Briullov at the Winter Palace at St Petersburg. The copious appendices provide Palagi’s brief autobiography and an examination of each residence that focuses on inventories, contents, artists and suppliers, each of whom gets his own potted biography. In addition, De Royere obligingly supplies a guide to the various archives he consulted in Turin and Bologna, where Palagi’s library survives virtually intact in the Archiginnasio.

Stendhal’s reference to “le célèbre Palagi, peintre de Bologne” reminds us that Palagi was regarded by his contemporaries as a painter and also a native of Bologna, not Turin. His autobiography places more emphasis on the large canvases, murals and ceilings he executed in Milan than his work for Carlo Alberto. It was in Bologna that he embarked on his artistic career at the age of 12, under the pupilage of Count Carlo Aldrovandi, who advocated copying the Bolognese masters Guido Reni and Domenichino. Once established there, he took on, as pupils, Vitale Sala and Carlo Bellosio, who were both Bolognese. They would later paint large ceilings at Racconigi—not that they eclipsed their master and his tour de force, The Dance of the Hours (1839-58), on the ceiling of the ballroom of the Royal Palace in Turin.

Turin is to furniture historians what Florence is to art historians, and it owes its position partly to Palagi and his cabinetmaker, Gabrielle Capello, and the work they did for Carlo Alberto from 1832 onwards. Indeed, the king gave him virtual carte blanche to design whatever he wanted, and his creations were executed by a “regiment of artificers”—Giuseppe Gaggini who provided marble chimneypieces, the Manfredini brothers the bronze mounts, and Capello the richly ornamented furniture, as well as Jeanselme of Paris and Henry Peters of Genoa (although originally from Windsor!).

Some might find Italian Neo-Classical painting, including Palagi’s work, rather cold and lapidary, but no one can deny that Palagi excelled at ornament. His use was exuberant and derived from Greek, Roman and Etruscan sources. These came partly from his vast library and partly from his own personal collection of antiquities. Furthermore, Baron Von Stackelberg’s discovery in 1827 of “the Baron’s Tomb” with its well preserved murals at Tarquinia inspired new interpretations of Etruscan art, as manifested in the Gabinetto Etrusco at Racconigi. All this chimed in with Carlo Alberto’s passionate belief in Italian reunification and the importance of the Etruscans as an Italian civilisation. Surprisingly, Palagi also owned a copy of A.W.N. Pugin’s A graphical illustration of the Metropolitan Cathedral church of Canterbury, doubtless helping him familiarise himself with Neo-Gothic, the prevailing style at both Pollenzo and Le Margherie, the latter situated in the park surrounding Racconigi. This much appealed to a king who was also passionate about chivalry and the early medieval origins of his dynasty.

Palagi may have been regarded as somewhat passé by the 1850s. Carlo Alberto’s successor, Vittorio Emanuele, showed a marked preference for Domenico Ferri’s Rococo Revival interiors. Nevertheless Palagi has gained well-deserved prominence in recent years and De Royere has certainly reinforced that process.

James Yorke was a curator at the Victoria and Albert Museum for 32 years before retiring in 2010. He has lectured and published various articles on furniture and historic houses, especially Lancaster House in London