Visitors return to Crystal Bridges amid adaptations and provocations When the Crystal Bridges Museum of Art in Bentonville, Arkansas closed in March, as the Covid-19 pandemic wreaked havoc with American society, two major special exhibitions were paused and new initiatives and programmes were jettisoned to limbo. Yet, as the museum this week became one of the first major American art institutions to reopen to the public, visitors can find an uncanny timeliness in its galleries.

No one would have foreseen the startling new world and the period of widespread social protest sparked by racial injustice that the museum now exists within. But to unexpectedly encounter a video installation built around Billie Holiday singing a phrase from “Strange Fruit”, the disturbing and indelible song about lynching, is to be reminded of the ways art can channel and transform the frayed, exposed nerve endings of the zeitgeist. 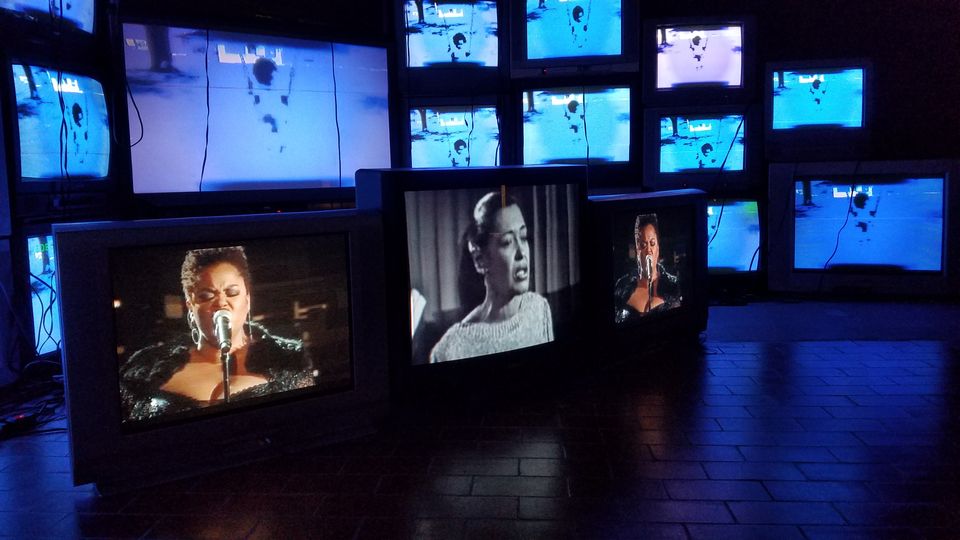 Paul Stephen Benjamin, Summer Breeze, in State of the Art 2020 at the Momentary. Photo: Steve Paul

That haunting work, Paul Stephen Benjamin’s Summer Breeze, appears in State of the Art 2020, a nation-spanning assembly of contemporary art that sprawls through Crystal Bridges and over to its new satellite facility, the Momentary, a mile or so away. Much of the content of that show, like its first edition six years ago, speaks to up-to-the-minute themes of identity and social justice.

In addition, and more pointedly, the current exhibition Hank Willis Thomas: All Things Being Equal has now resumed its run. It is a mid-career survey of Thomas’s examinations and rearrangments of pop culture, advertising, corporate power, and race. The show was originally scheduled to close in April, but the museum was able to extend it to 13 July. (Its planned next stop, at the Cincinnati Art Museum, has been reset to September.)

“An exhibit shift is not an easy thing to do,” says museum spokeswoman Beth Bobbitt. “But we were glad to be able to do it. It’s a powerful exhibit. And people are looking for that reflective moment.”

The museum’s reopening feels familiar and sensible. Everyone wears a mask. Timed and ticketed free entry is limited to 30 people every 15 minutes. There is enough space in the galleries to give families with children or small groups a wide berth. And there is also the awareness that even as the museum was coming back to life Arkansas was experiencing an upturn in Covid-19 cases. Precautions remain. Some museum attractions—a Frank Lloyd Wright house, a James Turrell Skyspace, the Yayoi Kusama Infinity Mirrored Room—are still off-limits. In the Thomas exhibit, one video piece was kept closed because, as a guard told me, it wasn’t feasible to constantly sanitise the fabric draping the alcove entry.

Still, attendees I spoke with were pleased to revisit what for some has become a favourite place.

Mark Lauderdale, travelling from Texas toward St Louis with his niece Anna, took a detour to Bentonville when he learned the museum would be back open. He wanted to show 14-year-old Anna the museum’s American art, especially work by Georgia O’Keeffe. “To see Georgia O’Keeffe’s paintings in person is different,” he says.

Crystal Bridges might have a deep-pockets advantage—the Walton family wealth with which it was built—not enjoyed by other arts institutions. Many museums have yet to set reopening schedules and protocols. Crystal Bridges, which employs 344 people in both locations, managed to endure the three-month shutdown without layoffs, furloughs, or pay cuts.

At the Momentary, a multi-purpose operation in a cleverly converted cheese-making factory, the shutdown hit like a buzzsaw. It had only opened to the public in late February and three weeks later went dark. Concerts and other events have been cancelled or moved online. A gallery-filling show by Nick Cave—yet another timely provocation on race—has been put off from July to September. And planned artist residencies have adapted to the new reality.

One silver lining came with the closure, according to the Momentary’s director, Lieven Bertels. Contractors have whittled down a list of renovation details that were not quite done when the campus first opened. On Wednesday, visitors to the Momentary took in State of the Art, lounged in the lobby coffee shop, and sunned themselves on the campus patios.

And in another timely episode in Bentonville, public officials this month set into motion plans to remove a statue of a Confederate general from the town square.

The action resonates with the presence of Thomas’s All Things Being Equal. The brilliance of his show, says Allison Glenn, the associate curator for contemporary art at Crystal Bridges, is how Thomas gives viewers multiple entry points—sports, history, advertising, social justice—with which to engage his underlining theme of “questioning everything.”

It’s also a reminder, she says, that we should not be surprised that racial injustice has emerged as the major topic of the day. Many have lived with it all their lives.

And walking through All Things Being Equal becomes an exercise, literally, in shifting perspectives, in seeing ordinary things—language, historical photographs—from new angles as Thomas incorporates the flash of neon words and the optical magic of lenticular surfaces. Glenn emphasised Thomas’s guiding thought that “the most radical thing a person can do is to be open to change.”

• Steve Paul is a writer in Kansas City, Missouri.