Despite a history of protest and a very present controversy at the museum, this year’s survey of American contemporary art is missing a radical spirit 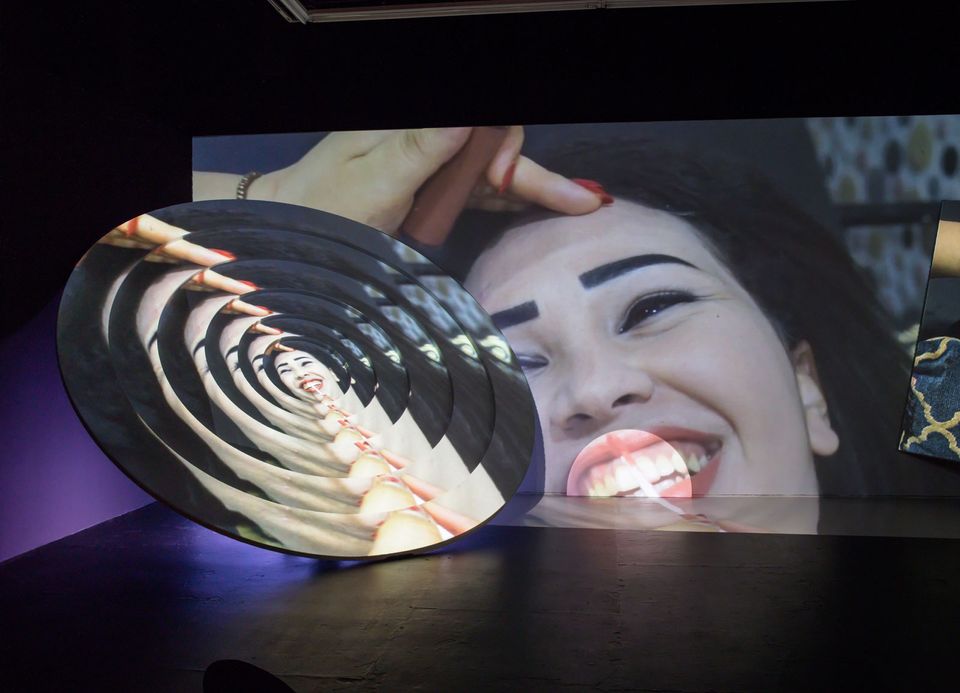 What do we want from contemporary art? The 79th Whitney Biennial offers a variety of answers. With one probable exception, controversy is not one of them, nor is the excitement of what we used to call the radical gesture.

As organised by the curators Jane Panetta and Rujeko Hockley, this (untitled) survey is the most even-tempered and disciplined within memory, as considerate of viewers as it is confident in the health of new art today. Which is very pleasant.

“Considerate” and “pleasant”, by the way, are not words I ever expected to apply to a show that carries outrage and upset in its historical baggage. With works by 75 participants, this biennial is an airy installation of refined art as free of bombast as it is of new ideas. It doesn’t preen. It doesn’t strut. Strangely, for an exhibition that aligns with the politics of resistance, it doesn’t ruffle many feathers, either. Some artists in the show identify as activists, but there are no revolutionaries among them.

“This is the first time I haven’t found anything to hate in a Whitney Biennial,” one critic admitted to me, privately, during the preview on Monday. “Is it me,” inquired another, “or is this biennial really boring?”

In the repressive age of Trump, visionaries seem in short supply.

Panetta and Hockley, both members of the Whitney Museum’s curatorial staff, address another question: what do we want from an American art institution? How can a museum offer respite from the cruel realities of life in this country today without pandering to commercial interests? There is no easy answer to this one. (Tiffany, the jeweler, is the show’s lead sponsor, but who doesn’t like Tiffany?) Still, it is bracing to see a thorny issue frame the picture of inclusivity that the exhibition composes.

As a model of political correctness, the 2019 edition achieves greater gender and ethnic parity than ever before. But this is a millennials’ biennial. Its curators privilege emergent talents over established market darlings—think Simone Leigh, Wangechi Mutu and Nicole Eisenmann, all of whom are showing work that speaks to their individual strengths. Their younger counterparts have produced utterly professional art but make no forward strides from the abiding influence of Robert Rauschenberg, 1970s conceptualism and, in the case of Brendan Fernandes, the choreography of Trisha Brown. In the repressive age of Trump, visionaries seem in short supply.

The majority of the artists included are under 40, but they display less energy than notable seniors who deserve more visibility in museums and generally show with commercial galleries in single, storefront locations slightly larger than your great aunt’s walk-in closet. If there is a breakout star here it may be Daniel Lind-Ramos, who is in his mid-60s and whose cultural-specific sculpture is better known to citizens of his native Puerto Rico than to those in the US. Centinelas (Sentinel), the more transcendent of two works he has in the show, is an assemblage of found objects that suggests a pipe organ or an altarpiece made of palm branches, burlap, tarps, spoons, a cauldron and rope. They are among the items that washed up near the artist’s home in 2017, after the disastrous Hurricane Maria wrecked the island and killed 3,000 people.

Another bright light is Carissa Rodriguez, whose smart, art-about-art video, The Maid (originally commissioned by Sculpture Center in Long Island City), borrows from Louise Lawler but with a clever twist: it casts Sherrie Levine’s appropriation of Brancusi’s timeless egg in the role of a housekeeper moving through a collector’s home, a museum and an auction house, and couples it with a portrait of frozen embryos.

There is more painting than has been usual, some rather good—Walter Price, Jeanette Mundt, Keegan Monaghan—none exceptional. Wild cards are few. Martine Syms is one, and so is Nicole Eisenman. Known best for her painting, Eisenman’s outdoor Procession presents a troubling tableau of agonised, larger-than-life figures reminiscent of concrete sculptures by Adrián Villar Rojas, but make use of myriad organic and industrial materials that include resin, feathers, dirt, hair and twigs. 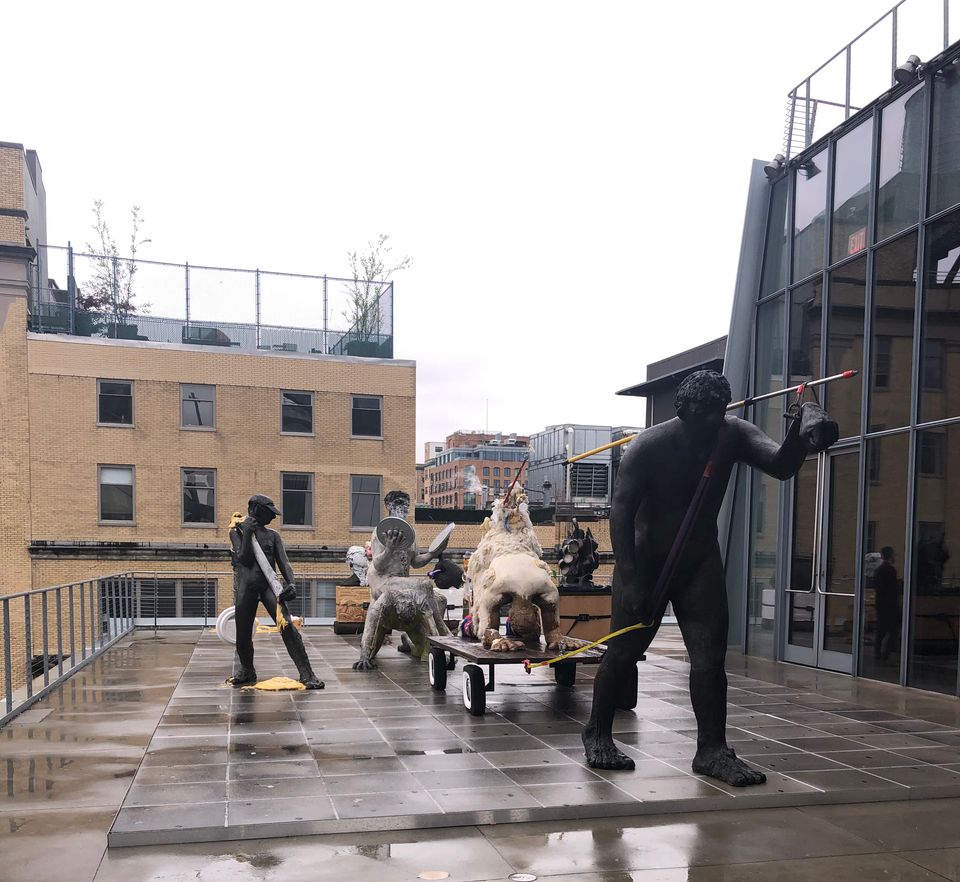 Generally, there is an abundance of both found-object and handmade assemblage. With the exception of Brian Belott’s frozen collaged paintings on popsicle-like poles seen through deli freezer windows, it doesn’t offer much humour—especially, for Warren B. Kanders. The vice-chair of the Whitney’s board, Kanders owns and operates Safariland, a company that makes the injurious tear gas canisters, called triple-chasers, that American border patrol agents and military have been lobbing at asylum seekers crowding our southern border.

Last November, nearly 100 Whitney staffers signed a letter asking for Kanders’s resignation from the museum’s board. (The biennial’s co-curator Hockley was one.) In an op-ed for the New York Times, Kanders insisted that he wasn’t the problem. He isn’t, entirely. That would be the person who militarised the government’s response to the migrants at the border. But another problem is the public's perception of the museum.

In an endearing, bite-the-hand-that-feeds-you move (Kanders also helped to underwrite the Whitney’s recent Andy Warhol retrospective), the biennial includes the independently funded film Triple Chaser by the UK-based collective, Forensic Architecture. Forget for a moment that the group falls outside the museum’s exclusively American art purview; the work was produced by the homegrown documentary film-maker Laura Poitras. (A mural by the biennial artist Pat Phillips also pictures such a canister.) 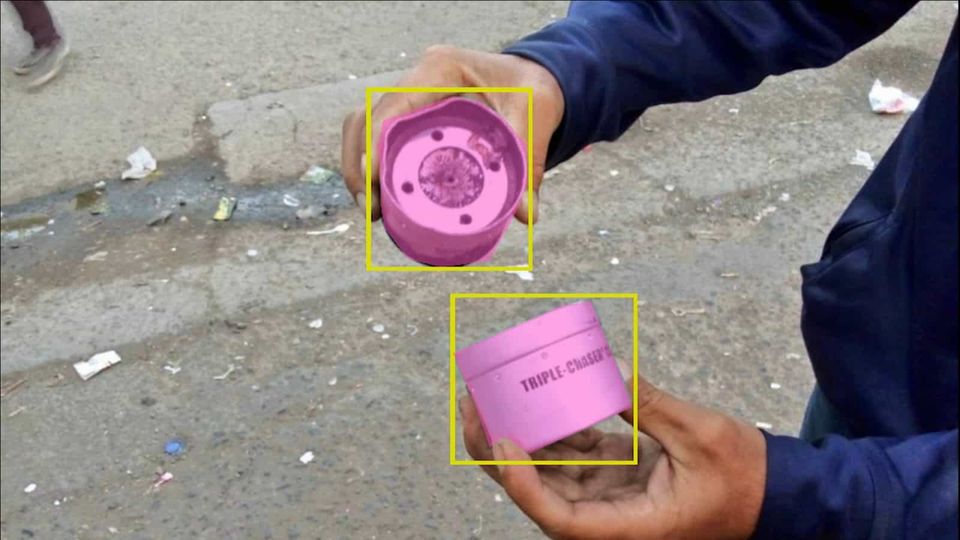 Tear gas grenades are forbidden on actual battlefields; they are only used to control civilian unrest. Employing AI-assisted methods, Forensic Architecture created an algorithm to identify the use of triple-chasers in trouble spots around the world. The film also includes information about civilian deaths in Gaza linked to Sierra Bullets, another business partially owned by Kanders.

The problem is that the film comes off as slick propaganda—advertising to sell justified outrage. It is useful mainly to point up the morally compromised position of institutions that, lacking government leadership or support (or even interest), accept money from individuals whose wealth derives from objectionable sources.

That may be the world we live in now, so perhaps it makes sense for the biennial to reflect it. Ultimately, it returns us to the question of what we want from art and its institutions. Pleasure? Confrontation? Agency? Sensory stimulation? Historical reckoning?

This exhibition attempts to do it all, without actually making a difference.

Correction: Triple Chaser was not commissioned for the biennial, as a voiceover in the film states, it was independently funded. Forensic Architecture received an honorarium from the museum, as did the other artists in the show. Our review was updated to reflect this.