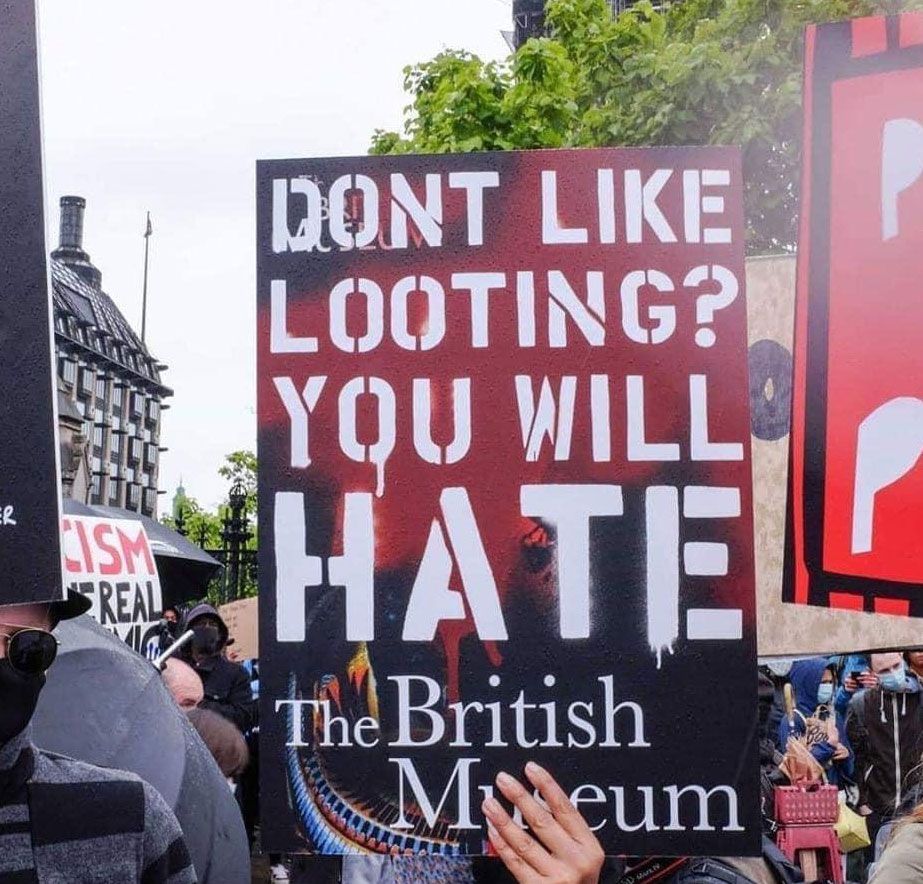 In London, Black Lives Matter demonstrations have highlighted the connection between institutions such as the British Museum and colonial-era looting in Africa. Philip Robins

The conversation around the removal of monuments valorising white supremacist or colonial figures continues to escalate following ongoing Black Lives Matter protests, some of which have led to vandalism and looting. And campaigners for the restitution of artefacts looted from Africa during the colonial era are viewing the movement as an opportunity to increase pressure on Western museums that have so far taken only hesitant steps to address past wrongs.

While coverage of the protests has focused primarily on the toppling of statues of slave traders and confederate generals, the issue of colonial-era plunder has played a supporting role. A popular sign carried by UK protesters read “Don’t like looting? You will hate the British Museum.” Meanwhile, a statement from the British Museum deploring the police killing of George Floyd and expressing solidarity with the Black Lives Matter movement sparked thousands of tweets accusing the institution of hypocrisy and insincerity.

In June, Paris demonstrators went a step further, trying to seize artefacts at the Musée du Quai Branly because “most of the works were taken during colonialism and we want justice.” Five protestors were arrested.

“All these things are connected,” says George Abungu, an archaeologist and former director of the National Museums of Kenya. “If the museums had dealt with it a long time ago, it wouldn’t have been looked at like this. But now history has caught up. Repatriation is part of this discussion about colonialism and racism.”

In December 2002, leading museums of Europe and the US issued a “Declaration on the Importance and Value of Universal Museums” in response to demands for restitution. It called for recognition “that objects acquired in earlier times must be viewed in the light of different sensitivities and values, reflective of that earlier era.” Abungu at the time took issue with this declaration, arguing that all museums are universal as well as local. “Are universal museums based solely in Europe and North America?” he asked in an article, concluding that the special status the museums had bestowed on themselves “is a way of refusing to engage in dialogue around the issue of repatriation”.

Since then, the discussion has progressed. In 2017, French President Emmanuel Macron triggered a movement taken up by museums and authorities across Europe with his pledge to permanently restitute African patrimony in France to Africa. Germany’s 16 states last year approved guidelines creating the conditions for the repatriation of artefacts in public collections that were taken “in ways that are legally or morally unjustifiable today” from former colonies. In the UK, Arts Council England is aiming to deliver guidelines for museums on repatriating colonial-era plunder in the autumn.

But overall, progress has been halting. The museum consortium know as the Benin Dialogue Group, for instance, was founded in 2007; over the past 13 years, it has agreed to create a digitised inventory of the looted Benin bronzes and to loan them to Benin City on a rotating basis but has so far stopped short of pledging to repatriate them permanently.

And it is almost two years since Felwine Sarr and Bénédicte Savoy recommended the return of a vast number of Sub-Saharan African artefacts currently in French public museums. Shortly after its publication, Macron promised to give back 26 treasures looted by French colonial forces and currently in the Quai Branly to the country of Benin (not to be confused with Benin in Nigeria). The objects have yet to be returned and no more major repatriations have been announced. Instead, the new president of the Quai Branly, Emmanuel Kasarhérou, said in an interview with the New York Times in June that Sarr and Savoy’s “very militant” report “cannot be a blueprint for policy” and that he is “not in favour of objects being sent out into the world and left to rot”.

So, in the absence of urgency on the part of museums, activists are beefing up their campaigns. The New York-based grantmaking network Open Society Foundations has pledged funding of $15m over four years to initiatives aimed at repatriating looted cultural objects to African countries. Among the projects to benefit is Lagos Photo, which runs from 24 October to 19 December and is focused on “rapid response restitution”.

“This is a moment in which we are seeing some urgency around Black Lives Matter,” says Rashida Bumbray, the head of the culture and art programme at the Open Society Foundations. “It’s a launching pad, a moment when restitution can be brought into the debate. We don’t want to miss it.”

Here are some of the treasures that were looted in European military operations in the colonial era from African locations that are likely to be under discussion in the context of this debate:

In a “punitive expedition” against the Asante people in modern Ghana in 1874, British troops ransacked the royal palace and demanded 50,000 ounces of gold. The loot that remains in UK museum collections includes a golden head at the Wallace Collection and items such as beads at Oxford University’s Pitt Rivers Museum and discs and anklets at the Victoria and Albert Museum.

In 1897, British troops plundered and devastated the Royal Palace of Benin, looting at least 3,000 artefacts and possibly many more. These are scattered around European museums including the British Museum, Vienna’s Weltmuseum, the Pitt Rivers Museum, Berlin’s Ethnology Museum and Hamburg’s Museum am Rothenbaum. An initiative is under way to digitise the collections and the museums have agreed to loan the treasures on a rotating basis to Benin City in Nigeria.

British troops looted the royal treasury at Maqdala in modern-day Ethiopia in 1868, taking gold, silver and precious manuscripts. Two-hundred elephants and 15 mules were required to carry all the bounty and the citadel was destroyed. The British Library, the Victoria and Albert Museum and the British Museum are among many institutions that still hold plundered works; only a few items have been returned.

The French colonel Alfred-Amédée Dodds looted anthropomorphic statues bearing royal emblems during the sacking of the Abomey Palace in 1892. These are housed at the Musée de Quai Branly in Paris. Macron has promised to return 26 items to Benin.

In 1890, the French colonel Louis Archinard plundered more than 1,000 objects from the Ségou royal palace in the capital of the Toucouleur empire in modern-day Mali. Items including jewels, weapons and manuscripts are scattered around French museums including the Quai Branly, the Musée de L’Armée, the Bibliothèque Nationale de France and the National History Museum in Le Havre.

Spoils of the Maji Maji War

From 1905 to 1907, German troops conducted a brutal war to put down an armed rebellion against colonial rule in German East Africa (modern-day Tanzania). Items such as drums, weapons and objects used in medicine that were looted in the war remain in the collection of Berlin’s Ethnology Museum. The museum has teamed up with the National Museum of Tanzania to document these objects.