Four Fates of the Soul: Death, Soul in Hell, Soul in Purgatory, Soul in Heaven (around 1775), attributed to Caspicara, The Hispanic Society of America

Los Angeles today stands on what was once part of Spain’s vast empire in the Americas. Yet the rich artistic heritage of colonial Latin America was, says Ilona Katzew, the head of the Latin American art department at the Los Angeles County Museum of Art (Lacma), “a complete novelty” for the museum and for the city when, in 2004, she staged Lacma’s first exhibition on the period. The positive response led Katzew to champion viceregal art as the “missing link” between the pre-Columbian and modern and contemporary periods.

Lacma is among a handful of US museums that have made strides in the field over the past two decades, appointing specialist curators, building collections and organising dedicated exhibitions. Its current show, Painted in Mexico, 1700-90: Pinxit Mexici (until 18 March), which is due to travel to New York’s Metropolitan Museum of Art (24 April-22 July), presents more than 100 works by 24 artists. The team of four curators viewed “2,000-plus” works over six years of field research in more than 30 cities in the US, Mexico and Europe to make the final selection, Katzew says.

Simple demographics is one reason for Lacma’s—and other US museums’—growing interest in colonial Latin American art. The Hispanic population of Los Angeles county reached 48% in the 2010 US census. Latinos are the largest minority group in the US, and one of the fastest growing.

“There’s a great interest in reaching that audience,” says Mitchell Codding, the executive director of the Hispanic Society of America. “There’s a lot that can be done because the general public is unaware of the phenomenal quality of Latin American colonial art at its highest levels.” The institution is touring treasures from its nearly 30,000-strong collection (spanning from the Paleolithic era to the 20th century) until late 2019 in the exhibition Visions of the Hispanic World, while its New York building is closed for refurbishment. Many of the viceregal works in the show, which opened at Madrid’s Museo del Prado last year and travels to the Museo del Palacio de Bellas Artes in Mexico City in June, are recent acquisitions, from rare barniz de Pasto Colombian lacquerware to a set of polychrome wooden sculptures depicting the fate of man by the 18th-century Ecuadorian Manuel Chili (Caspicara). 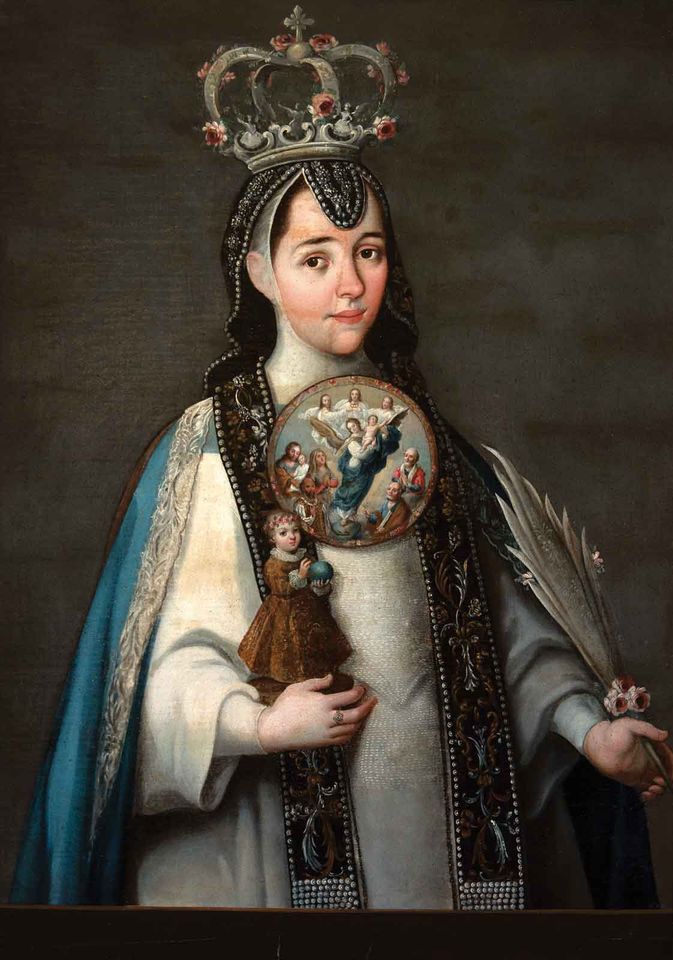 The trend also reflects the “rise of globalism in art history”, says the scholar Jonathan Brown, who shifted his focus from the Golden Age of Spain to New Spain in the late 1990s. “Slowly but surely, the canon of Western art is being enlarged. New Spanish painting is one of the beneficiaries.” Brown, together with Luisa Elena Alcalá, published the first English-language survey book on the subject in 2014 (Painting in Latin America, 1550-1820: from Conquest to Independence, Yale University Press).

The explosion of interest in Latin American Modernism is having a natural domino effect, says Gabriel Pérez-Barreiro, the director and chief curator of the Colección Patricia Phelps de Cisneros (CPPC). “People are asking, ‘What came before this?’ There’s a growing awareness of the 19th century and going back to the colonial period.” Last May, the CPPC announced the donation of 119 works from the Venezuelan-born collector’s own, mostly Venezuelan, colonial holdings to five museums, including the Blanton Museum of Art at the University of Texas in Austin and the Denver Art Museum. The gifts were a “statement of support” for institutions that collect in this area, Pérez-Barreiro says.

As someone who worked with Latin American geometric abstraction years before it became cool, he sees a parallel in the “slow-burning” rise of colonial art. “It’s like watching that same process earlier in the curve,” Pérez-Barreiro says. “To me, what is interesting about the colonial period is the connection with Asia—Latin America was a total melting pot in the 1600s. In terms of globalisation and many of these kinds of contemporary questions, it seems like that is where this really starts.”

Yet some US institutions find fine and decorative arts produced in colonial Latin America difficult to categorise. “Does it belong to European art because it’s colonial? Should it be in a Latin American department? Should it sit with works produced in the US in the American wing? That dilemma has been there for a lot of US museums,” says Alcalá, who also co-organised Lacma’s Painted in Mexico exhibition.

To me, what is interesting about the colonial period is the connection with Asia—Latin America was a total melting pot in the 1600s Gabriel Pérez-Barreiro

Acquiring viceregal works can also present a challenge. “When you’re talking about the top pieces, it is a niche market,” Codding says. For dealers such as Robert Simon in New York and Derek Johns in London, Latin American colonial art represents a fascinating sideline to their main activity in European Old Masters. The volume at auction “shrank dramatically” in the 1990s due to export restrictions in most Latin American countries, says Virgilio Garza, the head of Christie’s Latin American art department. Simon likens the provenance issues involved to the antiquities trade: “One has to look very carefully because it’s a bit of a minefield.”

As a result, US institutions often buy from Spanish galleries, such as Galeria Caylus in Madrid and Coll & Cortés, now Colnaghi. “If you’re lucky you’ll find these things lying around in Spain more than anywhere else in Europe,” Johns says. California is also a hotspot, thanks to historic collecting during the neo-colonial craze of the 1920s and 1930s. But discoveries such as the Miguel Cabrera casta painting that spent decades rolled up under a sofa in a Bay Area home, which Lacma acquired from Simon for around $1m in 2015, are “exceptional”, the dealer says.

The benefits of local expertise

Sourcing works for exhibitions is another challenge, requiring time and local expertise. Last summer, the Met hosted the first US monographic presentation on a New Spanish artist, the 17th-century Mexican Baroque painter Cristóbal de Villalpando. The planning began “within weeks” of her appointment in 2013, says Ronda Kasl, the museum’s first curator of colonial Latin American art. The star loan, the newly conserved 28ft-high canvas of Moses and the Brazen Serpent and the Transfiguration of Jesus from Puebla Cathedral, would not have been possible without the support of Fomento Cultural Banamex in Mexico, she says. 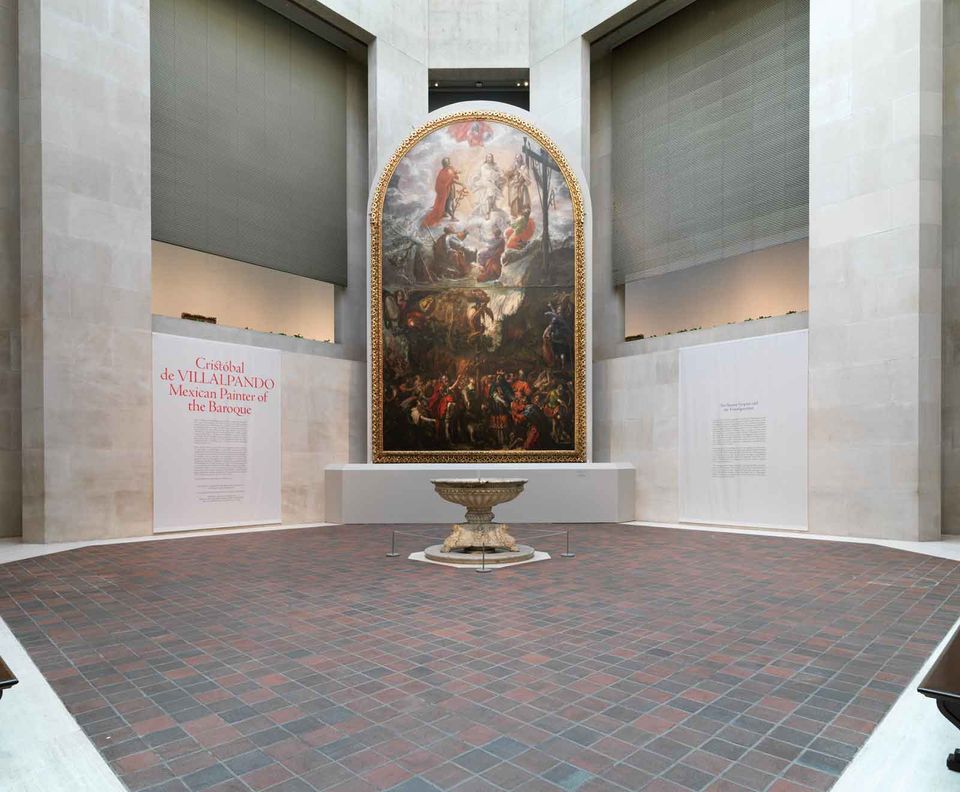 Cristóbal de Villalpando's Moses and the Brazen Serpent and the Transfiguration of Jesus (1683) installed at the Met for its show last year Metropolitan Museum of Art, New York

The cultural foundation of the Mexican bank Citibanamex has previously sponsored exhibitions of New Spanish painting at the Prado and the Louvre. It was a crucial partner in Painted in Mexico too, overseeing the restoration of a significant number of works and helping to negotiate the loans, Katzew says. The exhibition was first presented last year at the foundation’s headquarters in Mexico City, the viceregal Palacio de Iturbide.

These kinds of cross-border collaborations make practical and ideological sense, Alcalá believes. Working on Painted in Mexico with two Mexican co-curators, the academics Jaime Cuadriello and Paula Mues Orts, literally “opened doors”, she says, since local custodians tend to trust fellow Mexicans more than foreign visitors. “Many of Mexico’s greatest paintings are still hanging in churches in rooms that are not accessible—in the choirs and the sacristies.” Then there is the symbolic value of shared scholarship in a still “problematic” field. “I think transnational collaboration is the way to move beyond some of the old prejudices when dealing with a colonial past—it helps break down those boundaries.”