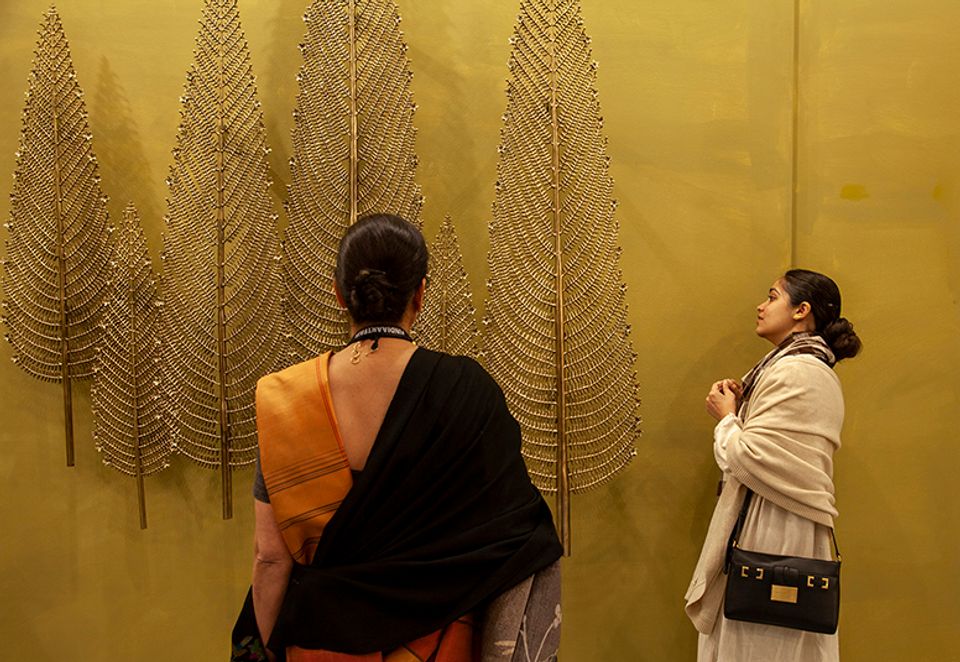 “Looking back at the past decade up to now, it certainly feels like India is at a tipping point”, says Jagdip Jagpal, the director of India Art Fair (IAF) in New Delhi, which opened its 12th edition today.

Indeed, this year's IAF—South Asia’s largest fair, consistently described as the “barometer” for the Indian art market—appears more polished and confident than ever. Eighty-one exhibitors (six more than last year) are participating in the event, which also hosts a performance programme including works by the Lagos-based Jellili Atiku and Indian-born Piyali Ghosh, who performed at the 2019 Venice Biennale.

While Jagpal remains tight-lipped as to what she has up her sleeve for next year—the first under new management by Sandy Angus who purchased MCH’s majority share of the fair last year—it is certain that the new decade also presents a new frontier for South Asian art. 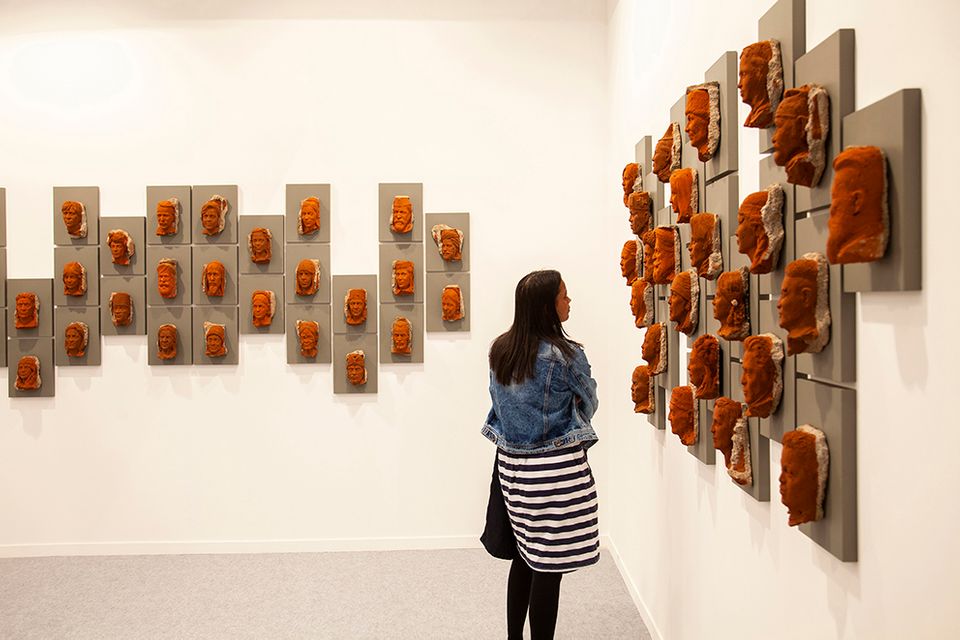 Girjesh Kumar Singh's The Stained Robe (2020), made from the rubble of demolished brick walls, is selling at Rukshaan Art Gallery for around £35,000 Courtesy of India Art Fair. Photo: Jeetin Sharma

The fair’s diversity of price points—ranging from £60 to £1m for an undisclosed Indian Master painting—is just one example of how IAF plays a part in maintaining a “balanced Indian art ecosystem”. This, Jagpal adds, in turn ensures that IAF is not affected by the “peaks and troughs” that face the wider Indian art market, which in the past few years has faced challenges brought on by governmental policies such as the Goods and Service Tax (GST) and banknote demonetisation in 2016.

The preview day brought strong but not outstanding sales for India’s largest galleries, which are clustered by the fair’s main entrance; many six-figure works are still “under negotiation”.

Works under £30,000, however, moved quickly in the opening hours. New Delhi's Nature Morte brought Bharti Kher’s Mother (2019) priced at around £100,000; but by the end of the VIP day, it was several works for around £25,00 that had sold, including Tanya Goel’s Mechanisms 8 (2020). Meanwhile, Chatterjee & Lal from Mumbai had sold just over half of its booth by the end of the preview day, including a 1980s Nasreen Mohaimedi graphite and ink-on-paper-work for around £25,000.

Still in play is IAF’s most important rule dictating that 70% of the fair's floor space is given to Indian galleries selling South Asian art. This offers an opportunity for galleries in India’s secondary cities, such as Gallery White in the western city of Vadodara, to access the subcontinent’s full scope of collectors. The gallery’s founder Vinit Nair says that by the end of the preview day, he had sold nearly all the work in his booth, including three-quarters of a new series of 120 photographs by Dayanita Singh. Per the artist’s request, the gallery only allowed one work to be purchased per person, with each piece priced at a highly affordable £180.

This year still saw a strong international contingent in attendance, the majority of whom were returning for the second or third time, keen to use the fair as a base to establish themselves with South Asian collectors. Although Pakistan’s galleries are unable to participate for logistical reasons stemming from the historic tensions between the countries, work by a number of Pakistani artists is on offer, including Rasheed Ashraen at Aicon Art. Moreover, emerging markets from the region also get the opportunity to participate. Saskia Fernando Gallery, new to IAF this year, is the first Sri Lankan gallery to show at the fair. 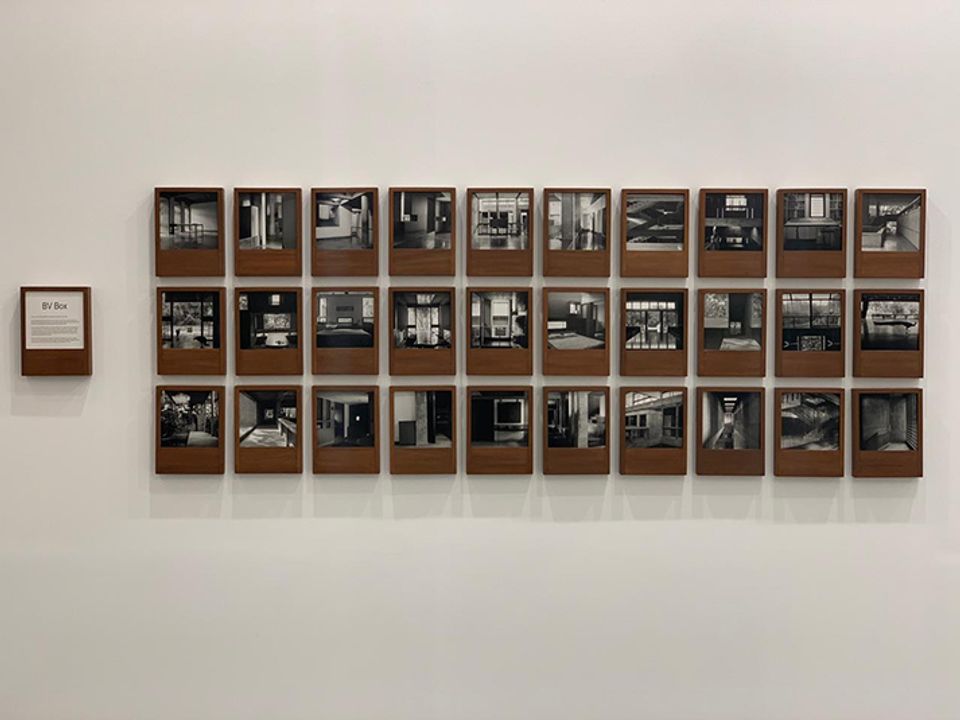 From further afield, fair newcomers PSM from Berlin sold their booth’s largest and most expensive work—a painting by Daniel Lergon for €15,000—to a Delhi-based buyer. Their director, Sabine Schmidt, attributes the sale in part to the gestural work’s focus on “materiality”, which she claims “resonates with South Asian customers, in contrast to the typical German buyer who is concerned far more about the work’s conceptuality”.

PSM is not the only international gallery whose strategy seems to involve appealing to the idea of "Indian taste". Showing at the fair for a third consecutive year, David Zwirner brought a series of blue watercolour-on-paper works by Marcel Dzama inspired by Bollywood movies. Specially commissioned for the fair and ranging from $15,000-$50,000, they were presented on a matching eye-catching mural, also by Dzama, painted on the gallery’s booth.

According to Jagpal, it is important that international galleries ensure a commitment to the fair, rather than coming for just one year, gaining regional contacts and then leaving. It would seem that Zwirner’s continued faith has paid off, with the gallery reporting a successful first day of sales, including a 2017-2018 painting by Oscar Murillo for $350,000 within the first two hours. Notably, all sales, including works by Wolfgang Tillmans and Harold Ancart, went to regional collectors. 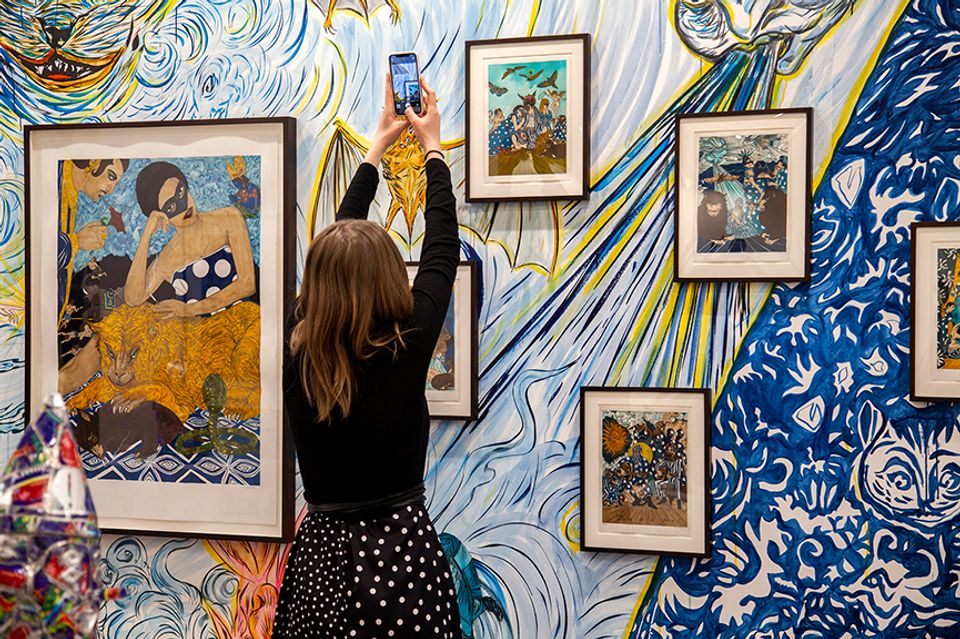 Consecutive returns by major international galleries certainly provide a sign of continued faith in South Asia’s art market, which last year moved from ninth to sixth place in ArtTactic’s global outlook rankings. However, moods have since shifted with recent reports of an economic slowdown, with the International Monetary Fund giving India its worst gross domestic product growth projection since the 2009 recession, due in part to a decline in private consumption.

This projection also follows a decline in overall art purchases as recorded in the public domain according to Artery India’s 2019 Indian art market report, which recorded the turnover of Indian art sales between January-December 2019 to have dropped to INR 559.6 crores (£59.6m) from 2018’s recording of INR 704 crores (£75m)—a decrease of INR 144.4 crores (around £15.4m).

The question of the potential economic impact of India’s widespread protests abounds too. Despite the fact that the fair is situated a ten-minute drive from the neighbourhood of Shaheen Bagh, the site of an ongoing protest (now in its second month) against a controversial citizenship act passed by the Bharatiya Janata Party (BJP), India’s ruling Hindu nationalist party, India’s turbulent political climate remains largely unaddressed by IAF's management. Although there have been reports of several participating dealers taking part in the Shaheen Bagh protests, those who were approached have asked to remain anonymous. However, some galleries, such as Gallery Ske, are acknowledging the protests through art at the fair. The gallery, which has spaces in Bangalore and New Delhi, is exhibiting a 2020 untitled series by 15 Indian artists, each of whom have created a work inspired by the Indian constitution. 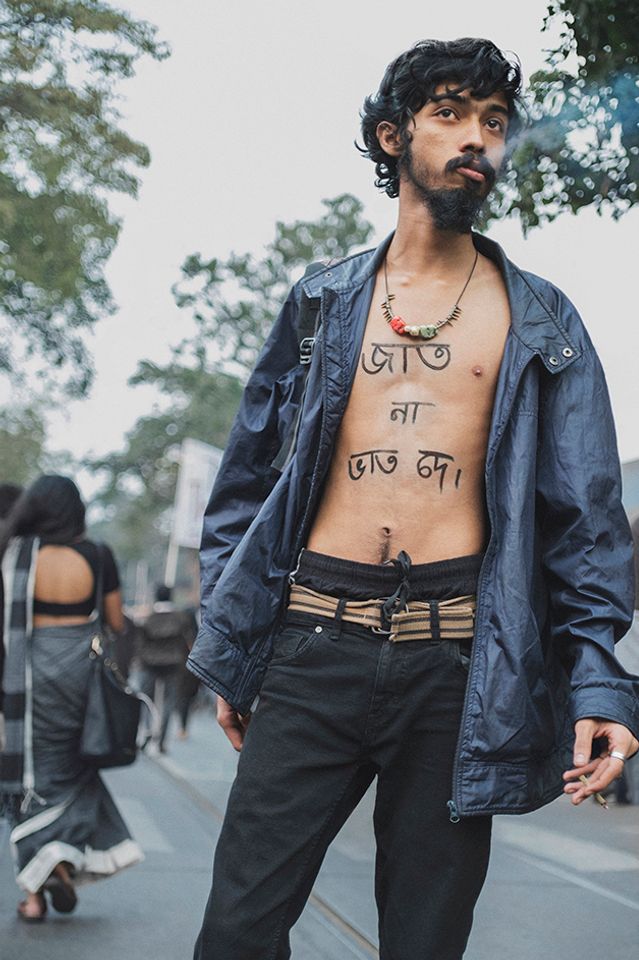 Similarly, the Mumbai gallery TARQ are currently showing a photograph by Ronny Sen—a Kolkata-based film director and artist who prolifically posts content criticising the BJP on social media. Priced for around £1800, it shows a young man at a recent citizenship law protest, his chest tattoo reading: “Don’t give me religion, give me food.”

Resistance appears to manifest itself not only in the content of the fair’s work, but in rare instances, also their sale. An artist, who wishes to remain anonymous, says that the proceeds from the sale of their work will be donated to the fundraising efforts for the legal fees of the various students who have been physically attacked by right-wing assailants in the past two months.

Perhaps to best respond to this crisis, IAF should look to its greatest strength—its longstanding collaborative efforts with South Asia’s institutions, foundations, and non-profits, from which it gains its distinctively Indian feel. As Jagpal says: “We’re not an international art fair, we’re a regional art fair and we’re incredibly proud of that.”