In economically shaky countries like Argentina, annual fairs like the now-postponed ArteBA are a financial lifeline. Now galleries must "rethink how to produce" 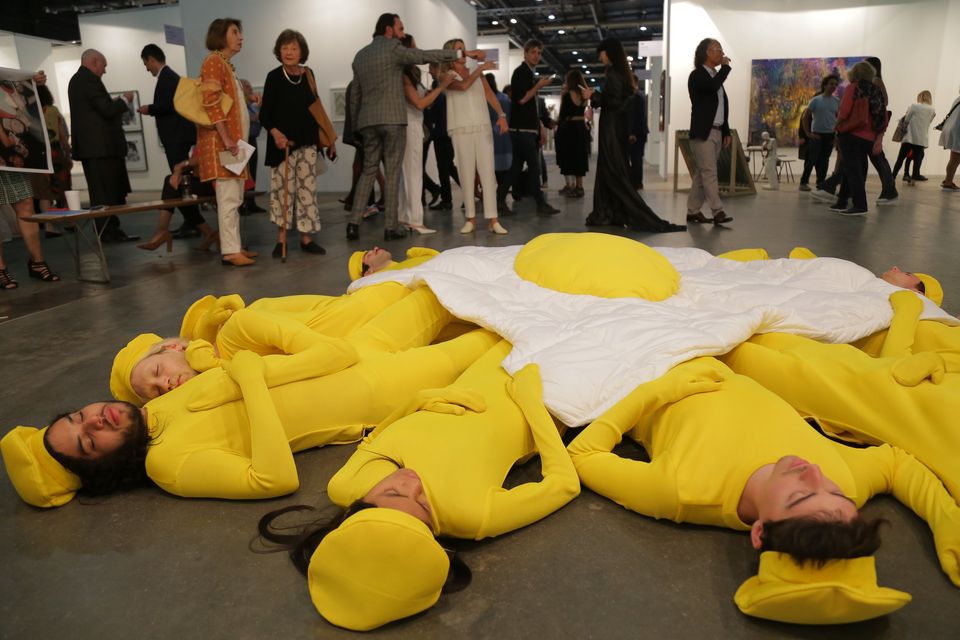 Out of the frying pan: younger galleries like UV Estudios—whose presentation at last year's ArteBA drew crowds—may struggle without one of South America's biggest fairs this year. Courtesy of ArteBA Fundación

The economic devastation wrought by Coronavirus (Covid-19) has already proven unprecedented. In the art world, where so many livelihoods are dependent on the next sale or gig, this crisis has laid bare how precarity affects the most vulnerable members of the industry and, in Latin America, the crisis may prove particularly disastrous for the creative classes.

Take, for example, the situation that many Argentine galleries are finding themselves in. Like dozens of other art fairs within the last month, ArteBA announced the postponement of their 2020 edition on 12 March, just one month before programming was scheduled to begin.

South America’s longest running art fair, ArteBA is the single most lucrative event of the year for many of the participating galleries, half of which hail from Argentina. The sales generated can sustain galleries for up to a year and the visibility it grants practices from geographically remote regions extends beyond the fair week, with ArteBA’s museum acquisition initiative, founded in 2017.

“Something like 60% to 70% of my annual sales happen that week,” says the Buenos Aires-based dealer Nora Fisch, who has participated in ArteBA since she founded her eponymous gallery in 2010. Fisch has an established local and international collector base, and participates in a number of international fairs, including the also recently cancelled Frieze New York.

Notably, ArteBA’s cancellation is an added stressor in an already delicate economic context in Argentina. Former President Macri’s International Monetary Fund (IMF) bailout in September 2018 was the largest in the nation’s (and organisation’s) history, deepening the country’s recession, and contributing to even higher inflation (peaking at a rate of 57.3% last year, one of the highest in the world) and rising poverty (in the first half of 2019, 35.4% of the population was living below the poverty line).

Newly installed President Alberto Fernandez has been swift to address Argentina’s socioeconomic crises by increasing the minimum wage, expanding social benefits, among other stimulus measures. His response to Covid-19 is yet another example of efficiency. Hours after the World Health Organization (WHO) declared the coronavirus outbreak a pandemic, the Argentine Ministry of Health announced that enhanced screening and quarantine measures would be put into effect to prevent the virus from entering the country (at that point, all of the known cases originated from beyond the continent) and reduce its spread. Then, on 19 March, with less than 100 recorded cases, President Fernandez addressed the nation, declaring an obligatory quarantine, now prolonged through 12 April.

For Amalia Amodeo—ArteBA’s president, who just assumed the position in December 2019—the necessity to postpone the fair was abundantly clear, though nonetheless difficult, considering the financial toll this would take on the artistic community. In an article for Clarín on 13 March, Amodeo framed the postponement as a question of “moral responsibility”.

While the Argentine Ministry of Culture announced a program to economically support non-profit cultural institutions amidst the crisis, commercial galleries do not fall under this umbrella. Members of Meridiano, an association for Argentine contemporary art galleries founded in 2016, are currently drafting a letter that will address their specific needs, especially in light of ArteBA’s postponement.

Yet the fair is vital to the Latin American art community at large, not just Argentina, with the other half of the 80 participating galleries primarily hailing from Central and South America, and collectors mostly visiting from Brazil, Colombia, Chile, Mexico, Portugal, Spain and the US.

“The role of ArteBA in Latin America is fundamental, without a doubt. We are searching for solutions to support the market and artists,” Amodeo says. “In this delicate moment for the world, where we are all living in situations that nobody imagined, we are absolutely focused on continuing with our mission by applying all the possible tools that technology provides us.”

A much smaller operation than Art Basel or Frieze—which, for their respective cancelled Hong Kong and New York editions, organised virtual viewing rooms—ArteBA Fundación is now planning a virtual edition of the fair on the online sales platform Artsy opening on 8 April, special video programming on Instagram TV, a redesigned website with more content and greater accessibility and an online version of their magazine.

Access to art online does not equate with an inclination to buy, however. “Even though everybody is emphasising digital contacts, networks, WhatsApp campaigns, it’s logical that in this emotional climate people will be reluctant to buy art,” Fisch says.

Younger galleries and their artists will also struggle more with the online onslaught than established galleries. While their margin of loss is ostensibly lower, they have less of a network to call upon in this moment of crisis and may be less recognised—and therefore trafficked—within a virtual iteration of the fair given the novelty of their programs. It is not an issue endemic to Latin America, but is perhaps compounded for emerging galleries there, who rely on annual regional fairs to gain crucial visibility.

For Constitución gallery, founded by artists Martín Fernández and Alberto Antonio Romero in 2018, last year’s ArteBA was their first. “It gave us visibility that our gallery felt during the whole year,” Fernández and Romero say. Now they are having to rethink their sales strategies entirely for this year.

The duo has recently opened Límon, Alfredo Dufour’s second solo exhibition with the gallery, which was planned to coincide with ArteBA with the hopes that a more international audience would be introduced to the artist's work. Dufour—who, since his inaugural solo show with Constitución in October 2018, has exhibited at Museo de Arte Latinoamericano de Buenos Aires Malba (Malba), Museo de Arte Contemporáneo de La Boca and the Centro de Arte Contemporáneo at MUNTREF as a finalist for the prestigious Premio Braque—is one of Buenos Aires’s most promising emerging artists.

After the fair was cancelled, Fernández and Romero have been resourceful in promoting the show, having opened it mere hours before the Buenos Aires’s non-compulsory quarantine was announced. "We had a virtual walkthrough of the exhibition with the artist present [on a WhatsApp video call] on Instagram Live. We are organising a date for readings by the same means, to give continuity to our poetry readings, which, in Buenos Aires, are very important, for coming together and the oxygenation of ideas,” they say. Mostly, they expressed concern for their artists, above all else, “who depend on these projects. Their situation is one of uncertainty. We are thinking about new strategies".

Another young gallery, UV Estudios, had to part way with their home (the gallery also had live-work spaces for many of their artists) in January of this year, as their lease came to an end without an option to re-sign. Violeta Mansilla, UV’s director, took this in stride, envisioning a year of producing itinerant projects and exhibitions as an alternative to the gallery model, with trips already planned to Berlin and Madrid. These will surely be cancelled because of foreseeable Covid-19 travel restrictions. What is more, though Mansilla had been raising funds for months, the sales generated during ArteBA were intended to go toward plane tickets for her entire roster.

Even so, Mansilla remains optimistic: “Maybe this ‘world stop’ is necessary to rethink how to produce. What are the roles of galleries, institutions and markets? It’s time to get creative, to reduce our physical distance despite the circumstances, and to reconsider how to survive economically when most of us are freelancers, without benefits or savings to survive even a month. Could it be an opportunity that capitalism has given us?”