So we’re bringing down statues—but what kind of monuments would we like to see instead? 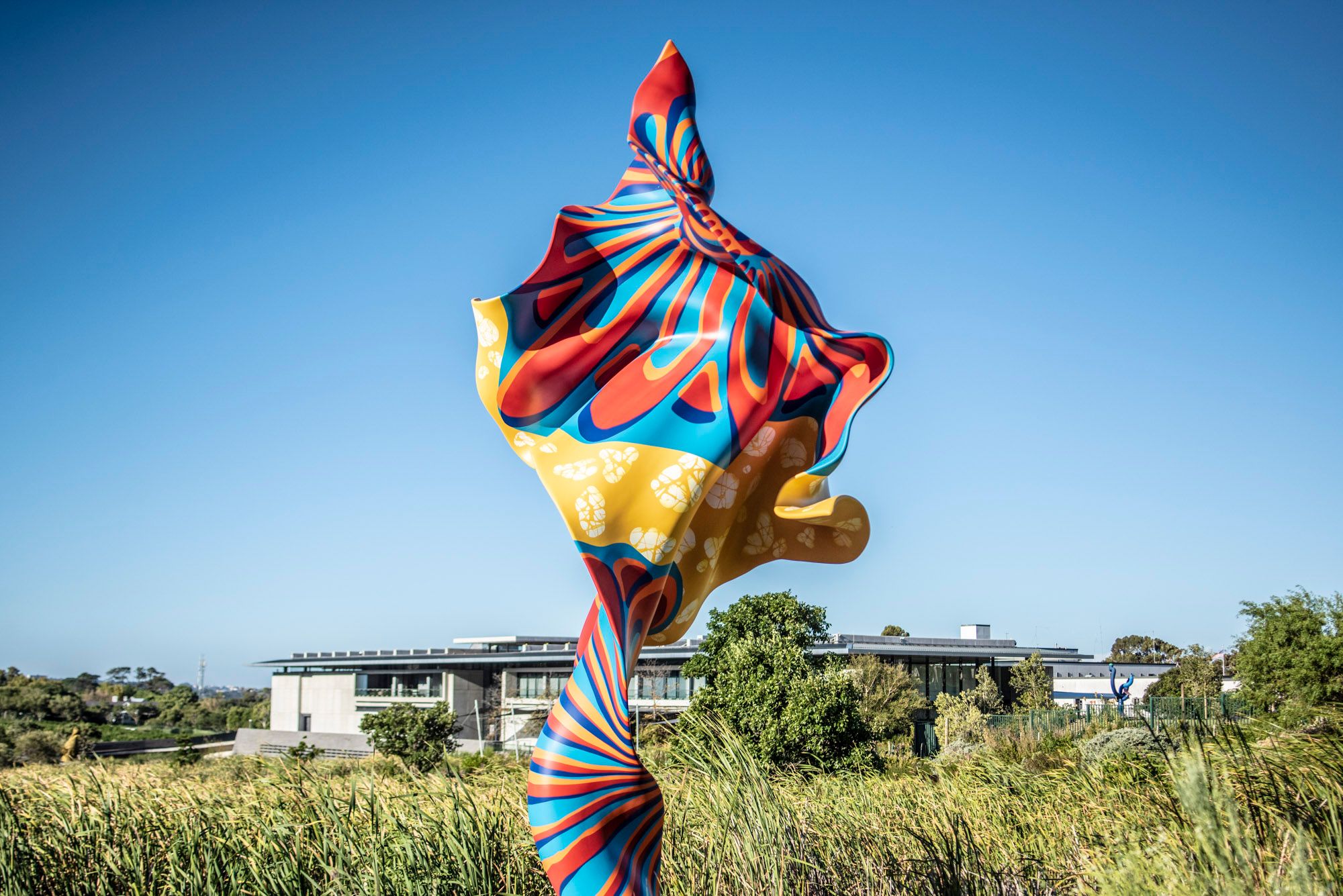 Yinka Shonibare's wind sculptures (see here at the Norval Foundation in Cape Town, South Africa) which evoke the wind that once took ships around the world could serve as an alternative to a traditional monument © Courtesy of the artist, Goodman Gallery, Cape Town, Johannesburg and London; James Cohan Gallery, New York; and Stephen Friedman Gallery, London.

Somewhere along the line, between the coronavirus (Covid-19) lockdown at the start of this year to the murder of George Floyd on 25 March, we went from "an unprecedented time" to "a time of great change". The Black Lives Matter movement gained global momentum in 60 countries around the world. Wider questions began to be asked and what started as an American conversation on the history of slavery turned to Britain where protests culminated in the bringing down of the controversial statue of the slave trader Edward Colston in Bristol on 7 June.

In the days that followed, statues of the slave owner Robert Milligan and the founder of the Scout movement in Britain, Robert Baden-Powell who also had links to the Nazi party, were taken down and a statue of the Victorian imperialist Cecil Rhodes is due to be removed from Oriel College, Oxford. Campaigns to remove statues of Henry Dundas, Francis Drake and Thomas Picton also have strong support.

These political monuments are erected by the state but conceived and created by artists. And as these figures fell, the art world waded into the debate. The Goldsmith’s-based research collective Forensic Architecture presented new evidence in the 2011 police killing of Mark Duggan and Banksy posited a replacement for Colston within days of its toppling. Debates on where these unwanted monuments should go have raged on through talk radio and political punditry on Twitter and in the media. But a question remains: what goes up in their place?

"I don’t believe that you can erase history,” said Yinka Shonibare CBE, in conversation with director of V&A East Gus Casely-Hayford in an intimate online talk held by Goodman Gallery on 9 June. “It’s more dangerous to erase history. However, I think that you can change public monuments and put the old historical statues in museums. I think museums are the best place for these statues.”

As an alternative to a traditional monument, Shonibare referred to his wind sculptures; uplifting to look at and intended to evoke the wind that once took ships around the world, moving both goods and people. One such work is installed in Howick Place in central London.

“What kind public art do we want and how do we want to be represented?” he asked. “This work is a deliberate attempt to bring sculpture down from the plinth, and I’m glad that this is in Westminster, in the historical seat of power and imperialism.” 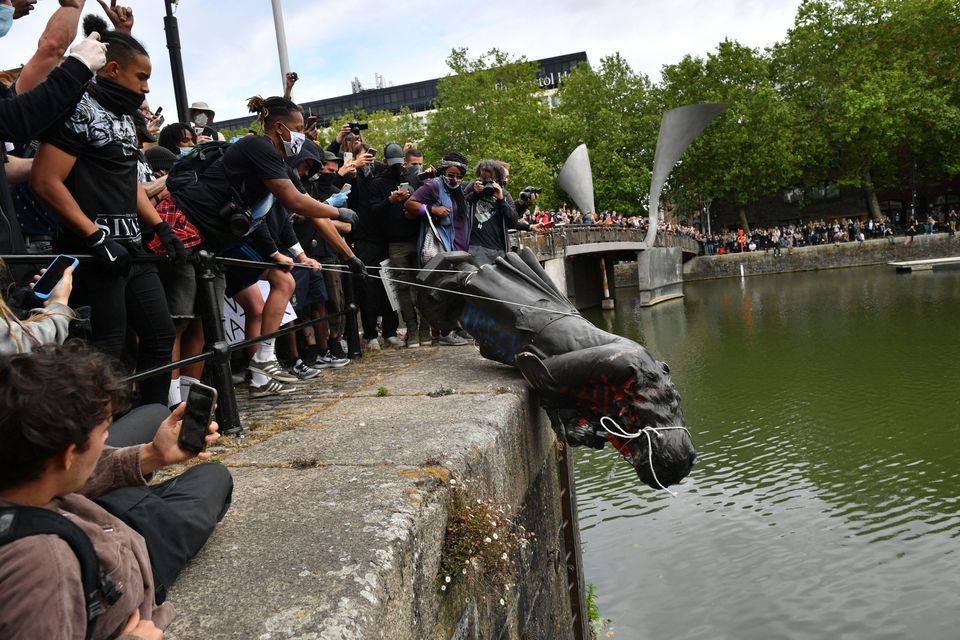 Protesters throw the statue of Edward Colston into Bristol harbour during a Black Lives Matter protest rally, in memory of George Floyd who was killed on 25 May while in police custody in the US city of Minneapolis © PA Images / Alamy Stock Photo

On 18 June as part of their Art Basel programme, Lisson Gallery hosted Memories of Elsewhere an online talk chaired by the writer and broadcaster Ekow Eshun with the artist John Akomfrah, the academics Tina Campt and Saidiya Hartman. Centred on Akomfrah’s 1986 feature length film called Handsworth’s Songs the talk, which was at capacity in minutes, quickly moved onto Black Lives Matter and the question of problematic monuments.

"For me, works—almost in a very mystical way—contaminate the spaces in which they're born, and feed the unspoken assembly, directions and insight about how they might work with things,” Akomfrah said. “So for instance, it was really strange, looking at Edward Colston's statue rolling down the street, suddenly he was just a tin can…The minute he's dethroned, dislodged, he just becomes an object—suddenly the whole symbolic order disappeared.”

Where these monuments come down we are left with empty spaces, pregnant with potential. Perhaps as we come out of lockdown into a changed world there is more meaning to be found in empty plinths than a rushed idea of what to fill them with. As the artist Hew Locke wrote in The Art Newspaper in 2017 following a wave of removals of confederate monuments in the US: "the newly empty plinths are all potential Fourth Plinths". Now, the question remains what should fill these empty spaces: who and what do we want to commemorate, mark, elevate and memorialise?

Last month, the office of the mayor of London announced a new commission to review the diversity of London’s public realm. This will include a review of street names, statues and plaques and will be co-chaired by Debbie Weekes-Bernard, the deputy sayor for social integration, social mobility and community engagement, and Justine Simons, the deputy mayor for culture and creative industries.

“We must ensure that we celebrate the achievements and diversity of all in our city, and that we commemorate those who have made London what it is—that includes questioning which legacies are being celebrated,” said Mayor of London Sadiq Khan, floating ideas such as a memorial to Stephen Lawrence, the Windrush generation, a National Slavery Museum and a National Sikh War Memorial.

Some of these projects are indeed already in the works. Ongoing conversations in the media veer between monuments that change periodically and public consultations. One thing that can be agreed upon is that people want to be uplifted and inspired by sculptures in public spaces.

Gillian Wearing’s popular statue of the suffragist Millicent Fawcett, hailed as a success by all, went up in Parliament Square in 2018 and this year, on 22 June, Windrush Day, commemorative works for Hackney were announced by Hackney Council and Create London.

“The process was very slow, we worked with the council and we brought people together,” says Create London founder Hadrian Garrard of the commission, which will be subject to ongoing consultation until its installation in 2021.

Garrard wonders if traditional monuments should be a thing of the past but what does he see as the alternative?

“Perhaps a plinth-less future where we don’t look to celebrating individuals or heroes with statues but we provide public spaces that are about and for everyone and sharing a moment together,” he ponders. "Maybe on a swing, under a tree or on a nice comfortable bench?”