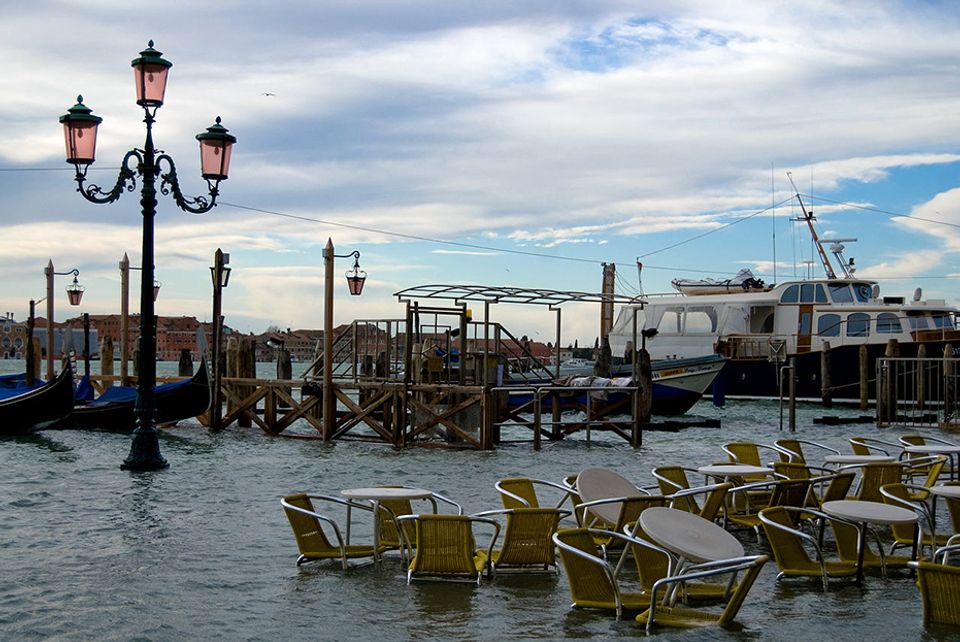 Venice is full of water, Venice floods, the climate is visibly changing, and sea levels are rising, so you would expect Venice, of all places, to have an official strategy for what to do about it—but you would be wrong. The management plans produced by the City of Venice for Unesco in 2013 and 2018 barely mention the subject and twice, in 2016 and 2019, Unesco’s World Heritage Committee has failed to call them out on this astonishing failing.

This is partly due to the fact that the World Heritage Committee has become an ineffectual politicised body, afraid of challenging any member state. Yet it is also because of a larger disconnect between the world of climate-change scientists and the cultural heritage community.

The report makes two substantive recommendations. It asks for a structural alliance with the Intergovernmental Panel on Climate Change (IPCC, the most authoritative body in the world for this subject), with heritage experts serving as peer reviewers of future IPCC reports, to which many governments at least pay lip service. Additionally, it says that all heritage sites, including museums, should have a detailed plan for how to react to climate change.

“The climate is changing and so must heritage. It would be foolish to imagine the practice of heritage remaining static while the world goes through the rapid and far-reaching transitions discussed in the IPCC’s recent [2018] Special Report on Global Warming of 1.5°C,” says Toshiyuku Kono, president of Icomos.

The report also lays great emphasis on the potential of the cultural heritage to educate people about the changes facing us. In its preface, Valérie Masson-Delmotte of the IPCC, writes, “There is immense and untapped potential for the mobilisation of society through active engagement with local communities and visitors of cultural heritage sites…education is crucial for the scale of societal transformation needed to address climate change”. Or to put it another way: imagine the effect it would have if every one of the 30m visitors a year to Venice were made aware of what climate change will mean for the city.

Yet the report comes up against the awkward reality that cultural heritage sites are also honey-pots for tourists and tourism has a growing carbon footprint—in 2009-2013 from 3.9b to 4.5b tonnes of CO2 and 8% of total emissions. It takes note of this and cannot propose any good solutions, but this does not invalidate the report as a whole, which is potentially revolutionary.

A warning: The Future of our Pasts: Engaging Cultural Heritage in Climate Action (on the Icomos website) is not an easy read. The collaboration of 28 lead authors, with almost 100 contributions from natural and social scientists, heritage professionals and climate scientist from Africa, Asia, Australia, Europe, North and South America has been boiled down into dense set of maxims in bureaucratic language, arranged around four themes.

First, it believes strongly in the communicative power of the cultural heritage. It wants sites to become “living laboratories”, where the understanding of climate change is fostered so that people are encouraged to work harder towards keeping the increase in temperature well below two degrees Celsius. The world of the cultural heritage is creative, says the report, and it would be very helpful if the solutions invented for the protection of these sites were integrated into the work of national and global climate-research platforms and policies.

Second, the report says that we must plan for the risks ahead and work to develop adaptation policies at all political levels. This means balancing ethical, economic and cultural factors and managing change. In a world where President Trump’s denial of climate change is believed by millions, the report says that we need to enlist social psychology to help persuade people of the urgent need for changes of policy and systems because, “There is ample knowledge of how humans can deny risk in order to deal with anxiety”. It emphasises “endogenous knowledge”; that is, harnessing traditional knowledge, such as time-honoured methods for preventing forest fires.

Third, it says that the cultural heritage itself can help mitigate climate change. For example, by promoting the reuse of existing buildings and adopting historic stewardship practices that teach us how to change our ways of living, producing and consuming.

Finally, the report brings us up against the fact that there will be irredeemable losses. Archaeological sites near the sea—for example, ancient Carthage in Tunisia—are particularly at risk. It is vital, it says, to assess the vulnerability of places, a process that has not been undertaken yet for most of Unesco’s World Heritage Sites and, of course, thousands of culturally important locations that are not on Unesco’s list.

Indeed, if it were not for the 2018 report by the University of Kiel published in Nature, we would not know that 82% of World Heritage Sites around the Mediterranean are at risk of flooding or erosion. There will also be losses of intangible heritage as peoples are forced to leave their traditional lands because of desertification or sea level rise.

We are used to thinking that, given enough will and money, there is a solution to everything but this report says that we must get used to the idea that in many cases there will be no solution. It emphasises again and again: collaborate, share knowledge and remedies, educate, and—above all—plan ahead. Then only may we be able to mitigate the approaching catastrophe.