Throughout the Cold War Berlin’s museums quietly kept in touch—when the Wall came down, they embraced

This archive article, taken from our feature looking back at the fall of the Berlin Wall 25 years later, shows how German culture remained linked when politics broke down 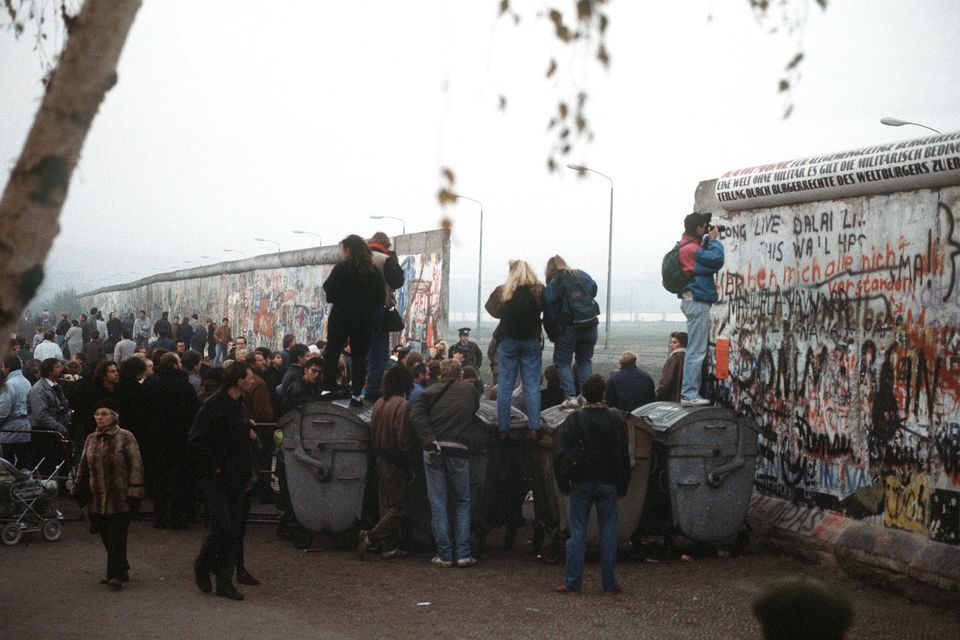 West German citizens gather at a newly created opening in the Berlin Wall at Potsdamer Platz in November 1989. Photo: US Department of Defense

The collapse of the German Democratic Republic (GDR) might have loomed from the summer of 1989, ever since the raising of the Iron Curtain along the Hungarian-Austrian border—but realistically no German politician considered it to be a possibility. The Berlin State Museums were one step ahead. In spite of the contact ban on the GDR side, they had managed to sustain a conversational relationship, albeit a low-key one, and this afforded them insights into the ever more rapidly advancing developments, which on a political level were still seen for some time as purely illusory.

Immediately after the fall of the Berlin Wall, therefore, when ideas of a “confederation” were floating about but a union of the two German states was still some way off, the museums were already making very definite overtures towards one another. The common inheritance of the former Prussian Museums (East and West had looked after this inheritance in different ways, but had, at any rate, looked after it) provided a basis on which museum officials could quickly reach agreement.

The critical mood in the GDR was reflected in the museums. At the very start of November 1989—even before the fall of the wall—a meeting of all museum employees demanded fundamental changes: “The legacy of maladministration in the State Museums must be dismantled!” This was a specific reference to the number and selection of Reisekader, namely those employees who, following checks by the Stasi, “were allowed to undertake official trips abroad”—something that for decades had been a source of annoyance among those employees not favoured in this way. With the opening of the Wall on 9 November, this demand became obsolete.

In early December 1989, the strict ban that until then had prevented the museums of East Berlin from making contact with the institutions of the West Berlin-based Stiftung Preussischer Kulturbesitz (Foundation for Prussian Cultural Heritage) was lifted. Günther Schade, the general director of the Berlin State Museums, had long since referred to himself and his West Berlin colleagues as “twin brothers with the same aims and purposes” and had been reprimanded by the GDR culture ministry as a result.

The first official conversation took place between Schade and his western counterpart, Wolf-Dieter Dube, on 14 December, and within a week the first steps of co-operation were agreed upon. Among them was the exchange of inventories, the importance of which cannot in be overestimated given the war losses sustained by the museums and the destruction of their records. Since the displacement of the treasures of Berlin’s museums after 1939 and their transportation to the Soviet Union in 1945 and 1946 as “trophy art”, nothing even approaching a comprehensive survey of the collection’s holdings had been carried out. When Peter Lorf, the acting GDR minister of culture responsible for museums, still felt able in early 1990 to reproach Schade because he could not, “with the best will in the world, see in his action any contribution to the politico-cultural position of the GDR”, his protest had an almost comical ring to it. Quite how far behind the times this rebuke was, could be seen only a week later when the East Berlin museums held their first press conference, attended by the Western media, at which they set out their ideas “on the merging of the separate museum complexes in the interests of an ‘all-Berlin museum landscape’”.

From then on things moved very fast, with the first joint directors’ conference taking place in February 1990. There was absolutely no disputing “the need to establish the functional unity of the separate institutes as soon as possible under one roof, either that of the existing Foundation for Prussian Cultural Heritage or, ideally, a potential national foundation”. This national foundation never came about owing to insufficient political will on the Western side to curtail the hitherto jealously guarded “cultural sovereignty” of the federal states. Just as with the union of the Federal Republic of Germany and the GDR at the macro level, so it also proved at the micro level with the fusion of the State Museums—the West’s existing institutions were retained while the East’s had to join forces with them in order for something new to emerge. However, as the irony of history would have it, the emphasis of the museum clusters—now bent on the same course—shifted to the Museumsinsel (Museum Island), the museums’ ancestral home in the historic Mitte district of the city, which had been assigned to the Soviet sector after 1945. The museum quarters in the West, the so-called Kulturforum near Potsdamer Platz, but even more so the museums in the suburb of Dahlem, rapidly diminished in importance.

The first and only democratic elections to the GDR’s Volkskammer (People’s Chamber) on 18 March 1990 paved the way for what was now termed German reunification. The “Unification Treaty” of 31 August 1990 contained a separate article on the Foundation for Prussian Cultural Heritage. It stated in very clear terms: “The parts of the former state Prussian collections that were separated as a consequence of post-war events are to be brought together in Berlin again. The Foundation for Prussian Cultural Heritage is to assume temporary trusteeship.” This ruling was immediately observed and the newly constituted states of the former GDR joined the foundation, which since that time has been supported by all 16 federal states.

In the first years after unification there was a certain amount of resentment, sometimes on the part of Saxony, sometimes Bavaria, at the idea of having to fund a former state—Prussia—that had been dissolved by the victorious powers in 1947. At the end of the 1990s, however, after the federal government had assumed the lion’s share of the running costs of the foundation’s institutes, particularly their building projects, this was no longer an issue: the federal government would foot the bill, and the federal states would still be entitled to have their say on whether things corresponded to their notion of “cultural sovereignty”. The museums, however, agreed that the main focus of the collections should once again be on the Museumsinsel, as had been planned and implemented back in 1830 with the founding of Schinkel’s Altes Museum, this island where millions of visitors come every year expecting to see and admire the treasures of Berlin’s museums.

• This article was first published in November 2014 under the headline: When museums came together