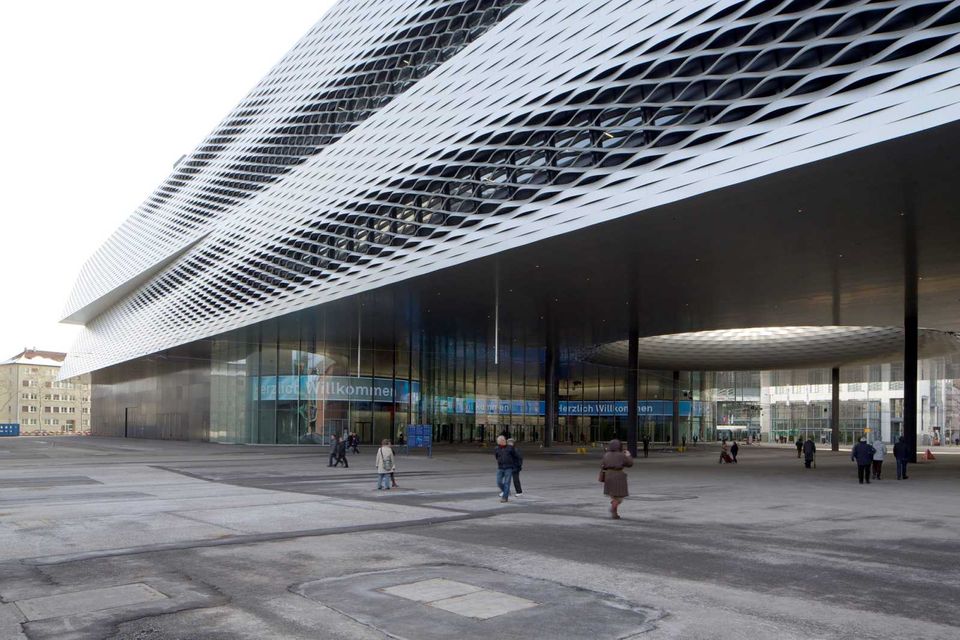 Herzog & de Meuron’s architectural reputation was made with London’s Tate Modern. Numerous art museums and one Olympic stadium later, the Swiss practice has completed its latest project in its native Basel: the new Hall 1 and a tower for Messe Basel, the home of Art Basel. Here, the firm’s founding partner Jacques Herzog elaborates.

The Art Newspaper: The new hall has a façade of twisted aluminium. Worked and woven metals have long been a notable presence in your work, from the copper wrapping of the Central Signal Box in Basel to the Beijing stadium with Ai Weiwei and the De Young Museum in San Francisco. What is the appeal of the material?

Jacques Herzog: We are not particularly obsessed with one particular kind of material or one particular method for using it, but yes, we insist on the materiality of architecture… its physical presence in all its dimensions… its perceptive qualities—surface—its energetic and its tactile qualities… its smell, and so on.

Are woven forms also about making the substantial insubstantial? The Elbphilharmonie project [a concert hall under construction in Hamburg] seems like a Manga crystal castle.

The weaving is more a kind of an all-over strategy, to make an object look more abstract, without a clear relation to scale… another aspect is the liveliness of woven aluminium bands.

More prosaically, how do you weave a monolithic building type, such as an exhibition hall, into a city to allow vitality and porosity and to break down its scale? Is this what you call “urban acupuncture”?

Urban acupuncture is related [to] its programming and its spatial qualities… in this respect, the new Messe Hall is the starting point of an urban transformation process around the Messeplatz: other large-scale projects with apartments, offices [and a] hotel with public functions are on their way, to create a urban place with an unusual density and intensity by Swiss standards.

Were there any particular or extra requirements for this exhibition hall, given its use for the arts?

The new halls are not made to accommodate art… their main purpose is to allow for any kind of stands, installations for large-scale booths or whatsoever… think of the gigantic, super-luxurious buildings that are temporarily installed there during Baselworld [the watch and jewellery fair]… of course—given that flexibility and [those] vast dimensions—the new halls could easily host art shows or even an art museum.

We never said anything like that. How could we as architects determine which museums have a right to exist? What we criticised in the past was the fashion trend for private museums as a consequence of the exploding art market.

You previously said that “we are at the end of Modernity and at the beginning of something new”. What is that “new”?

Who knows? Modernity has lost its ideological persuasiveness, which inspired so many of its early representatives in the field of architecture. Modernity in architecture has become one instrumentarium and one vocabularium next to others… it is true that it has failed and often disappointed all of us, but nevertheless, it continues to be a valuable and indispensable quarry for all our efforts. Perhaps the situation today in architecture and urbanism can best be compared with biomedical research, where various medicaments and therapies applied simultaneously are providing best results.