Why do certain works still set auction records during recessions

We noted in 2010, amid a painful global downturn, that a Picasso nude carried the largest pre-sale auction estimate in history at $70m to $90m 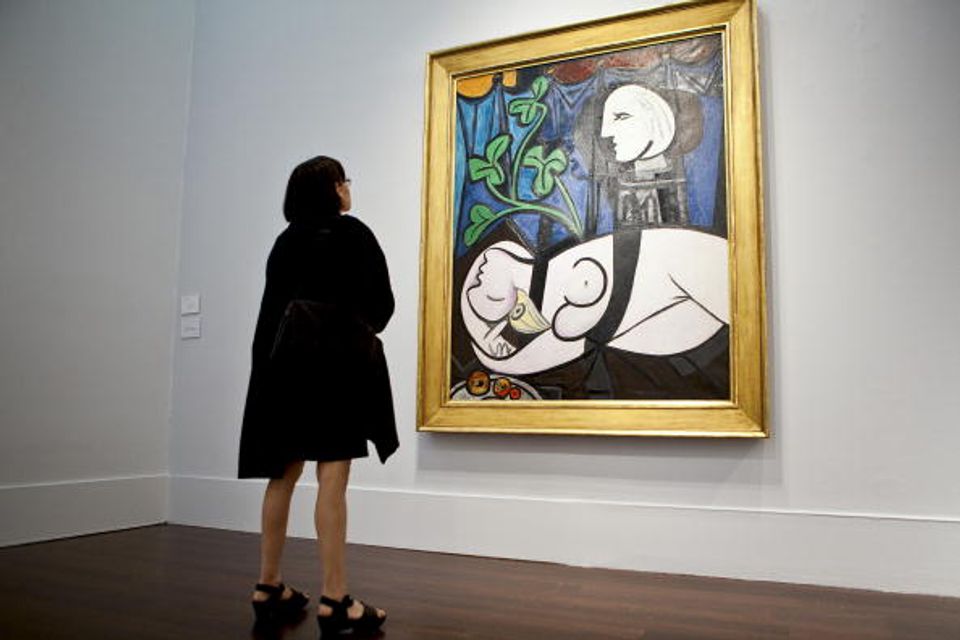 A visitor looks at Nude, Green Leaves and Bust by Pablo Picasso, during a preview at Christie's New York in 2010. The piece could fetch $100m Photo: Ramin Talaie/Bloomberg via Getty Images

The reign of Alberto Giacometti’s emaciated Walking Man I as the world’s priciest trophy at auction is likely to be short-lived. The six-foot tall bronze, which fetched an outsized $104.3m in February at Sotheby’s, London, is expected to be overtaken by a painting of Picasso’s lusty, lilac-hued mistress, Marie-Thérèse Walter, coming up for sale on 4 May at Christie’s, New York.

The 1932 Nude, Green Leaves and Bust bears the largest pre-sale auction estimate in history: an “on request only” $70m to $90m. But dealers say the painting may well hammer down for over $100m. It is from the same series as casino owner Steve Wynn’s celebrated Le Rêve, also 1932, which was sold to hedge fund manager Steve Cohen in 2006 for $139m, before Wynn accidentally plunged his elbow through the canvas and called off the deal. Christie’s painting has a third-party guarantor, so someone, somewhere, has locked in a bid for at least $70m.

If the Picasso performs as expected, it will be the second time in four months—amid a painful global recession—that the record for a work at auction is smashed. Until the Giacometti sale, the previous record, Sotheby’s sale of Picasso’s sensitive Boy with a Pipe (1905) in 2004 for $104.1m, had lasted for six years, through a boom. Now, as the recession drags on, experts predict another record sale. How could this be?

While economists are quick to point to signs of recovery, the recession is by no means over. Perhaps part of the answer lies in who exactly is suffering in this downturn. While the homeless proliferate, and the middle-classes buckle down, the wealthiest seem to thrive. A recent list of the top hedge-fund managers revealed that 25 earned over $25bn, yet pay some of the lowest tax rates in the US. If just a couple—like the acquisitive Steve Cohen, number five on the list—decided to dress up their walls, the auction prices would again soar.

Now may be a good time to put a masterpiece on the block. The uncertain economy means auction catalogues aren’t clogged with goods

Indeed, counter-intuitively, now may be a good time to put a masterpiece on the block. The uncertain economy means auction catalogues aren’t clogged with goods. Buyers can focus. A dearth of enticing offerings over the last couple of seasons means buyers are primed. To be sure, neither the Picasso nor Giaco­metti came to market for purely discretionary reasons. The Pic­asso comes from the estate of Los Angeles philanthropist Fran­ces Brody, who died in 2009. Mrs Brody and her husband bought the painting in 1951 at the Paul Rosenberg Gallery, for the then princely sum of $19,800. At the time the painting was considered decorative, hardly the critically significant example these Marie-Thérèse pictures were later deemed to be.

The Giacometti was sold following the sale of Dresdner Bank. Both works are blue-chip, cerebral, classic—ultra-safe bets. Both are also, in a sense, serial works. The Giacometti was cast in an edition of eight. The Picasso is part of a now celebrated series, promoted by Acqua­vella Galleries who mounted a blockbuster, non-commercial show in 2008 featuring examples of these pictures. Loans came from Wynn, Cohen, the Museum of Modern Art and the Guggenheim. Meanwhile, Picasso’s biographer, John Richardson, is at work on a show opening at Gagosian, London, next month (4 June-28 August), hoping to capture the same rave reviews the “Mosqueteros” show garnered at Gagosian New York last year.

Looking back, plenty of 20th-century milestone sales occurred in lousy economic times. The wealthy remained wealthy and there was opportunistic buying. The difference was that record-setting works were either Old Masters or 19th-century pictures—that era’s rare, safe and desirable.

Looking back, plenty of 20th-century milestone sales occurred in lousy economic times. The difference was that record-setting works were either Old Masters or 19th-century pictures

One of the most significant transactions took place amid the Great Depression. In 1931, Andrew Mellon bought 20 Old Masters from the Soviet government, with a view to establishing a new national museum in Washington, DC. Mellon paid $7m for the works, plucked from the Hermitage’s walls. The booty included Raphael’s Alba Ma­don­na (around 1510) and Bot­ticelli’s Adoration of the Magi (around 1481-82) Mellon paid $1.2m for the Raphael alone. In 1937, Mellon donated 125 master­pieces to Washington’s Nat­ion­al Gallery of Art. It is reminiscent of today’s sprees by Qa­tar, Abu Dhabi and other regions with new museums to stock.

Another form of distress selling—a British Earl with estate taxes to pay—brought Diego Velázquez’s 1649-50 portrait of Juan de Pareja to Christie’s in November, 1970, in another US recession. It was bought by the Wildenstein Gallery on behalf of New York’s Metropolitan Mus­eum of Art for $5.54m, another auction record. A short-lived consumer-driven recession in 1980 didn’t dampen the prospects for J.M.W. Turner’s Juliet and Her Nurse (1836) auctioned at Sotheby’s in London for $6.4m. The sale was discretionary, consigned by 82-year-old Flora Whitney Miller, the daughter of the founder of the Whitney Museum. Estimated to sell for over $1m, the Argentina cement heiress Amalia Lacroze de Fortabat was the buyer.

It wasn’t until 1990—just before the last major recession—that Christie’s sold Van Gogh’s painting of his physician, the 1890 Portrait of Dr Gachet, for $82.5m to Japanese paper magnate Ryoei Saito who also snagged Renoir’s Au Moulin de la Galette (1876) at Sotheby’s the following night for $78m.

If Mrs Brody’s Picasso sells as well as expected, it will add to the auction houses’ returning momentum, begun for the walking man. Dealers are already groaning that the auction houses are back in control when it comes to getting the goods. But with the unscripted drama of the saleroom there is no way to predict. We may all be sitting in New York, eyes glued to Christopher Burge’s gavel, only to watch everything freeze over. You can be sure, if the Picasso is hammered down for a “lowly” $70m, the recession will be blamed.

• Originally appeared in The Art Newspaper with the headline "Why do works make records in recessions?"