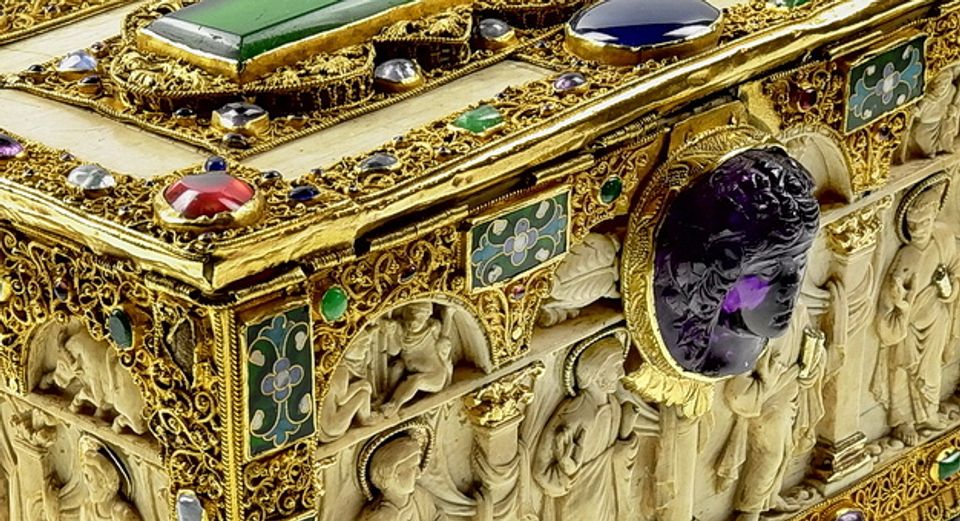 A reliquary inlaid with ivory, gold and gemstones from the church of St Servatius treasury in Quedlinburg Photo: Domschatz Quedlinburg

Ancient church treasures of gold, silver, ivory and rock crystal; enamelled, filigreed, and bejewelled, which were stolen from Quedlinburg by a US army lieutenant in 1945, have been returned to Germany, and the whole contents of the treasury—some 50 works— has just gone on display in the Kunstgewerbemuseum until 30 May 1993.

In 1945, some of the boxes in which the treasures of the conventual church of St Servatius had been stored were discovered to have been broken open, and twelve of the precious objects were missing. It was over 40 years before a trail led to Whitewright, Texas, where they were being offered for sale by the descendants of Joe Tom Meador, the lieutenant in question, who had died in 1980. The first item to be retrieved, in 1989 through the negotiations of the Kulturstiftung der Länder (the federal heritage funding body), was the tenth-century Samuel Gospels, with their golden calligraphy and jewel-studded cover. The remaining eleven works arrived back in April this year after an out-of-court settlement by the Kulturstiftung and the Ministry of the Interior.

Quedlinburg is now an unimportant town in the formerly East German Land of Sachsen-Anhalt, but it had its decades of glory in the early Middle Ages when it was closely connected with the German imperial court. From the tenth to the thirteenth centuries, the abbesses were all from the imperial family or the highest nobility. It was then that the church treasury was showered with gifts of the finest reliquaries and liturgical items goldsmiths could make. 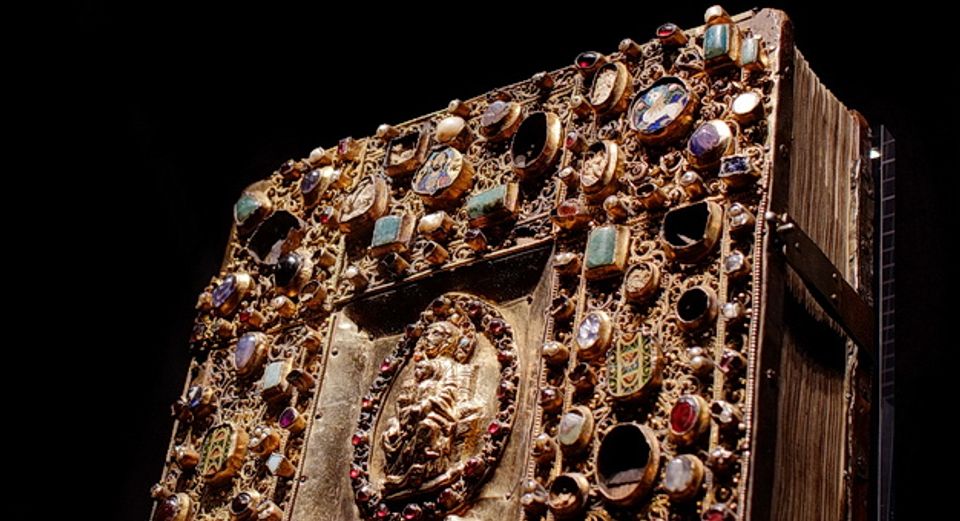 The Samuel Gospels from the treasury of the church of St Servatius in Quedlinburg Photo: Domschatz Quedlinburg

The theft has ultimately brought a bonus to the church of St Servatius. The West German agencies, having gone to such trouble to retrieve the missing items, have decided that the treasury needs to be brought up to scratch, so the Kulturstiftung der Länder, the clothing stores C.&A. Brenninkmeyer, together with funding from the federal government and the Land, are paying for the work to be done before the treasures go back on display in Quedlinburg next summer. As to the pieces themselves, the Samuel Gospels were conserved by the Bavarian Staatsbibliothek, while the rest was treated by the restorers in the Berlin Kunstgewerbemuseum. A catalogue has been published by Nikolai Verlag, Berlin, and costs DM58 (DM 30 p/b).

The whole is a tribute to the diplomatic skills and national divisions of the Generalsekretär of the Kulturstiftung, Klaus Maurice, whose view of German culture transcends normal politics, as his recent enabling of the British Library to buy the complete series of Tauchnitz classics shows; for at the time when he retrieved the first piece of the treasure, Quedlinburg was still behind the Wall.

about 10 hours ago
From a near collision with a tram to the week's hottest parties: what went down at Art Basel 2021

From a near collision with a tram to the week's hottest parties: what went down at Art Basel 2021