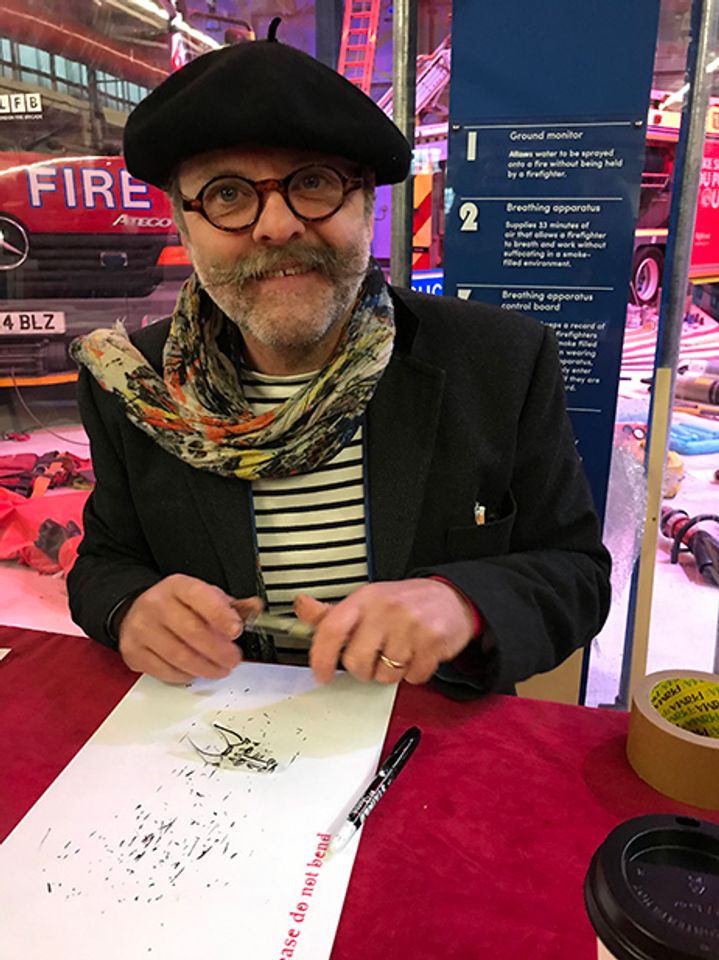 Gavin Turk always makes a topical contribution to the ever popular artist sales jamboree that is the Art Car Boot Fair. And this time was no exception. In the past, he’s made works using tyre tracks and exhaust fumes. At yesterday’s special Christmas "Prêt á Accrocher" (ready to hang) fair at The Workshop in Vauxhall, the ever-versatile Turk targeted its notorious queues of bargain hunters by involving them in a live action performance.

Picasso’s Bulls involved punters paying £150 to give the artist paper tickets pulled from the type of number dispenser used to regulate lines at doctor’s surgeries or deli counters. Inspired by their two-pronged shape, Turk—resplendent in a beret and matelot stripes—then transformed each numbered ticket into a unique Picasso-style mini bull. Future owners were summoned to witness the creation of their work when their individual numbers flashed up on a "Now Serving" sign. With more than 60 drawings dispatched in this branded form of artistic crowd-control, the enterprise certainly resulted in a load of bull.

A numbered ticketing system would also have come in handy for the snaking queues that built up around some of the other bargains on offer. This was especially the case for the temporary studio where the photographer Rankin was offering bespoke Polaroid portraits for £60. For those with a slimmer budget, a mere £10 bought an on-the-spot joint pencil and pastel portrayal that was simultaneously executed by Gina Birch (famously of the post-punk band The Raincoats but also a graduate of the Royal College of Art) and her artist friend Avis.

Sadly, these festive shenanigans are the last event to be taking place in the hangar-like Workshop, as this popular community space, situated near a host of creative charities, startups and artist studios, has fallen prey to property developers.