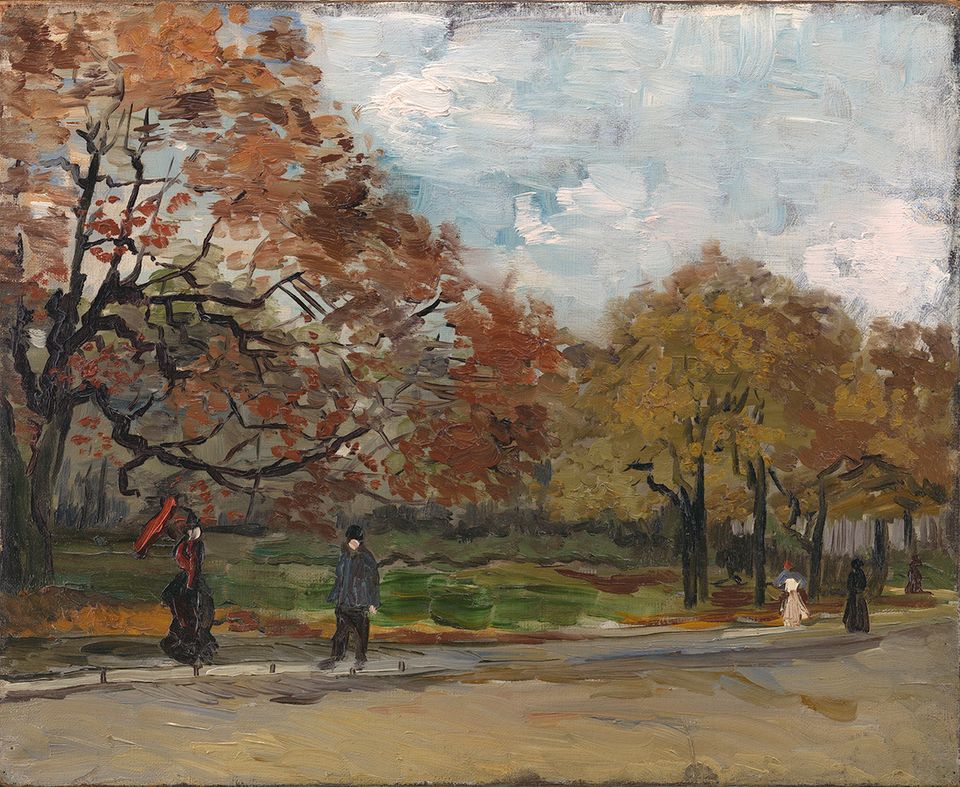 A rare Van Gogh rediscovery will be unveiled at the Tefaf art fair in Maastricht tomorrow. It will be on the stand of the New York dealer Hammer Galleries, with a price tag of around $10m-$12m.

The Bois de Boulogne with People Walking dates from the autumn of 1886, the year Vincent arrived in Paris, where he lived with his brother Theo. Four people saunter along a road in the woods, with the woman on the left holding a red parasol.

The painting was discovered by the Toronto-based Van Gogh specialist Bogomila Welsh-Ovcharov in 1979, hidden behind a door in a French manor house. It was in the home of the descendants of Albert Aurier, the avant-garde critic who had been the only person to publish a detailed article on Van Gogh during the artist’s lifetime. 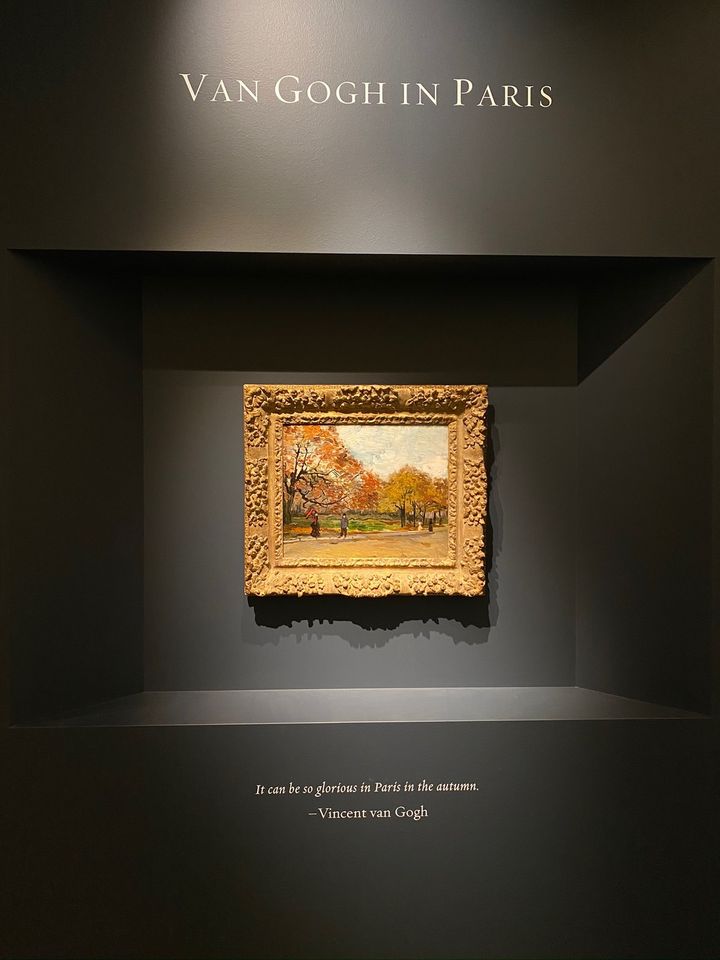 This week Welsh recounted her story for the first time. She told me that she had taken the train from Paris to Châteauroux, in central France, to visit the widow of Aurier’s nephew: Antoinette Williame, then in her late sixties. It was a long journey and Williame had invited her to stay with her, just outside the town.

As Welsh was escorted to the guest room on the upper floor they were passing through a set of double doors, as one might find in a good hotel to ensure the room is quiet. After the first door was opened, something made Welsh ask whether there was anything hanging on the short section of wall hidden by the open door.

Welsh could hardly believe her luck: “As I moved the door a bit, I saw there was a painting hanging. It was twilight, so I took the picture to the nearest window in the hall. The canvas looked like one of Van Gogh’s Parisian park scenes.”

In great excitement, Welsh asked if she could take the painting into her bedroom for the night. “By the morning I was convinced it was a real Van Gogh,” she recalled.

Welsh, a specialist in Van Gogh’s Paris period, asked how the picture had ended up behind the door. Williame confirmed that it had come from Aurier, but she confessed that her late husband Jacques had failed to recognise it as a Van Gogh and had disliked it. The painting had been banished to the attic and at one point she had saved it from being burnt in a bonfire. She liked the picture and had cleaned it with household soap and then hung it behind the door, where virtually no one ever saw it.

Aurier had been a great admirer of Van Gogh and ended up acquiring around ten paintings, which over the decades after his death in 1892 were gradually dispersed. At some point the attribution of the unsigned park scene had been lost, so it was considered of little value and not sold off by the 1970s.

At the time, Welsh was organising an exhibition on Van Gogh's Paris period and the cloisonist style. Before she left Châteauroux she had a second request: could she borrow the picture for her show?

The painting, which she entitled Roadway in a Paris Park, was unveiled in her cloisonism exhibition at Toronto’s Art Gallery of Ontario and Amsterdam’s Van Gogh Museum in 1980. This signified that Welsh’s attribution was accepted by the key Van Gogh specialists. Tomorrow, Welsh will be travelling to Maastricht to see her discovery once again.

Williame decided to sell the painting in 1983. Since then it has changed hands several times . but has always been sold privately and has never been publicly auctioned. The new owner may have been the Swiss lawyer Gerard de Cerjat. It was subsequently owned by the Laguna Beach, California, property developer Gerald Buck who lent it to the Palm Springs Art Museum for a few months in 2010. The painting was then bought by an unnamed European collector in 2012 and later that year it was lent to Denver Art Gallery’s exhibition Becoming Van Gogh. 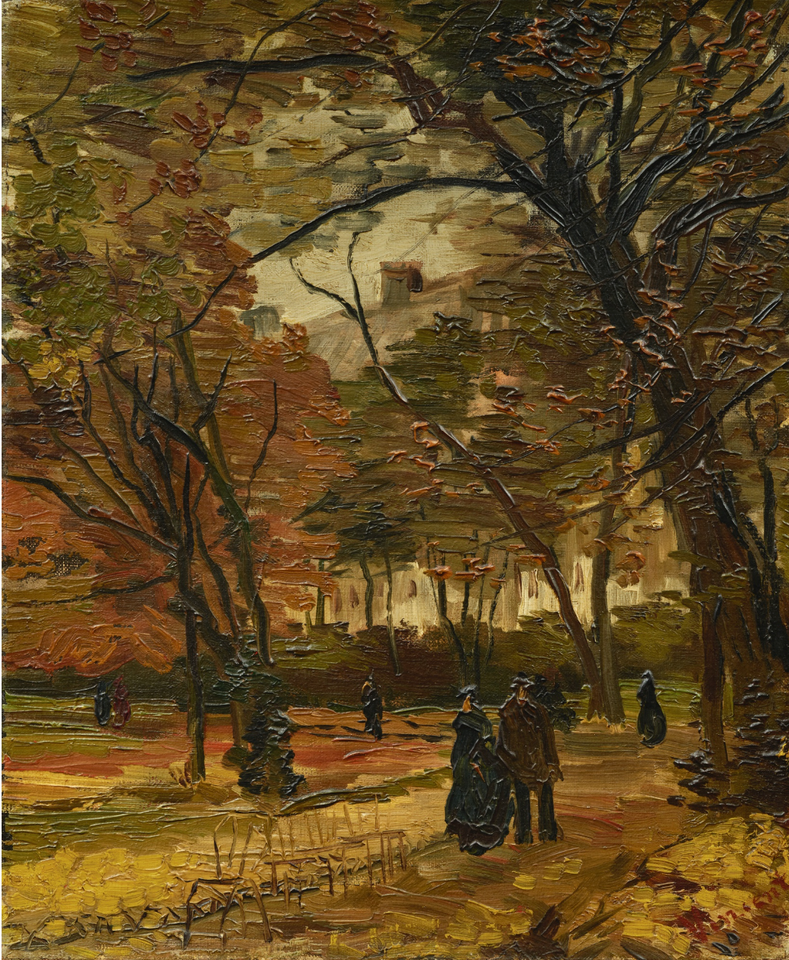 So how is the rediscovered Van Gogh now coming to Tefaf? The Hammer Galleries was the underbidder at Sotheby’s last November when People Strolling in a Park in Paris came up at auction, fetching $9.7m. Shortly afterwards an agent for the European owner of The Bois de Boulogne with People Walking contacted Hammer Galleries, asking if they might be interested in a similar work. A deal was made.

Although the Hammer Galleries is entitling their picture the “Bois de Boulogne”, I would question that location. The related Sotheby’s picture, once also believed to depict the Bois de Boulogne, is now thought to depict Parc Monceau (partly because of the building depicted in the background). It seems more likely that Van Gogh would have painted there, near his apartment, rather than at the Bois de Boulogne, five kilometres away.

On the reverse of the canvas of People Strolling in a Park in Paris I have identified a semi-legible stamp from a Parisian art supplies company: Hardy-Alan. This stamp was also apparently present on the reverse of another Van Gogh, a still life of flowers now in the Triton Foundation.

Howard Shaw, the president of Hammer Galleries, is delighted to unveil the painting at Tefaf. He says of their picture: “Although painted only a few months after Van Gogh’s arrival in Paris, it already shows the astonishing transformation that exposure to the Impressionists and Neo-Impressionists had on Van Gogh’s work. He arrived a realist painter of peasant life in dark, earthy tones, but left for the south of France two years later a ‘modern’ artist—using the bold and expressive colours he had absorbed in Paris.”

At Tefaf the Hammer Galleries will be presenting The Bois de Boulogne with People Walking in a special display on the theme “Van Gogh in Paris”, with works by his contemporaries. It is unusual for a Tefaf stand to have such a thematic group and the pictures on sale are worth over $100m.

Among the other paintings in the Hammer display are Degas’s Three Dancers in Yellow Skirts (about 1891, now on sale for over $40m), Charles Angrand’s Le coin du Parc Monceau (1888) and Henri de Toulouse-Lautrec’s Madame Aline Gibert (1887)—along with Utagawa Hiroshige’s print Sudden Shower on the Shin-Ôhashi Bridge, Atake (1857), which was copied by Van Gogh in Paris.

• The £4 Van Gogh sold at an English farmhouse in 1967 will also be on display at Tefaf Maastricht. Peasant Woman in Front of a Farmhouse (1885) is on sale at Simon Dickinson’s stand, priced at €12m-€15m.

• A coming exhibition on Van Gogh and the Olive Groves for next year has just been announced. It will be presented at the Van Gogh Museum in Amsterdam (25 June-12 September 2021) and the Dallas Museum of Art (17 October 2021-6 February 2022).

• The Courtauld Gallery’s travelling exhibition Masterpieces of Impressionism, which includes Van Gogh’s landscape Peach Trees in Blossom (1888), had to close at Nagoya’s Aichi Prefectural Museum last Monday because of coronavirus (it was due to run until 16 March). The show is scheduled to open at Kobe City Museum on 28 March, but this date is now uncertain.