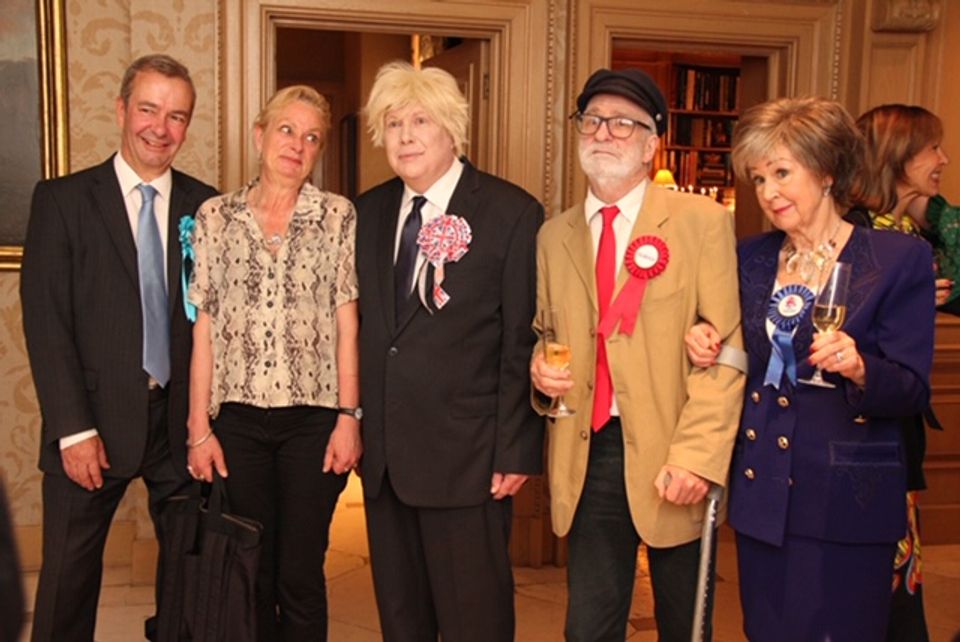 London art worlders have been bemoaning the prospect of Brexit for so long that many of us feel we are all cried out. Except, that is, for the art patrons Fatima and Eskandar Maleki, who last week decided to defy the gloom-fest and see in the summer with a Brexit-themed party. "ALL WE WANT IS eU" declared the invitations to last Tuesday’s bash. A throng of artists including Tomma Abts and Alvaro Barrington and the gallerists Stefan Ratibov, Victoria Miro, Pauline Daley, Angela Choon were among the crowd who beat a path to the Malekis' art-bedecked Mayfair mansion. Here they were disconcertingly greeted at the door by a grinning Nigel Farage, with Boris Johnson and Jeremy Corbyn looming close behind.

This unlikely trio—along with a rather less convincing Theresa May—were the doing of the artist and party guest Alison Jackson who, as well as making photographs using celebrity lookalikes, has also recently taken to the stage with Shot to Fame, a show that creates celebrity doppelgängers from audience members, four of whom had been recruited by Ms Maleki who said: “I’m so fed up with Brexit I thought I’d put them all together.”

As well as providing photo opportunities with these four harbingers of doom there was more fun and games by the basement swimming pool of the capacious abode where a special photo booth had been set up. Here much posing took place with multiple props including masks of the prime 'Brexiteers' as well as a cut-out of the Queen. True to the party theme, all the takeaway snaps were emblazoned with the legend, "I’m Brexsick." However the high point of the evening came in the form of the Malekis' famous Persian buffet—a spread of such legendary abundance and deliciousness that it took everyone’s minds off the B-word and brought everyone of all persuasions together. For one evening at least…