America Day by Day: an introduction

As I entered the US in January, about to embark on the third year of Culturunners’ US Tour, one American road story in particular came to mind—a book called America Day by Day by Simone De Beauvoir. In January 1947, Simone de Beauvoir landed at La Guardia airport for the first time and began a four-month journey that took her from one coast of the US to the other, and back again. Her intimate diary presented a post-war America, full of optimism and opportunity, but also of racial-tension and self-delusion. Writing home to her friend (and sometime lover), Jean Paul Sartre, De Beauvoir’s observations were often critical of the “superficial Americans” she encountered, but also full of surprise, admiration even, for Americans’ capacity for renewal and reinvention. The enormous gap between her previous idea of the country and the reality she encountered on her travels made her want to share her discoveries. 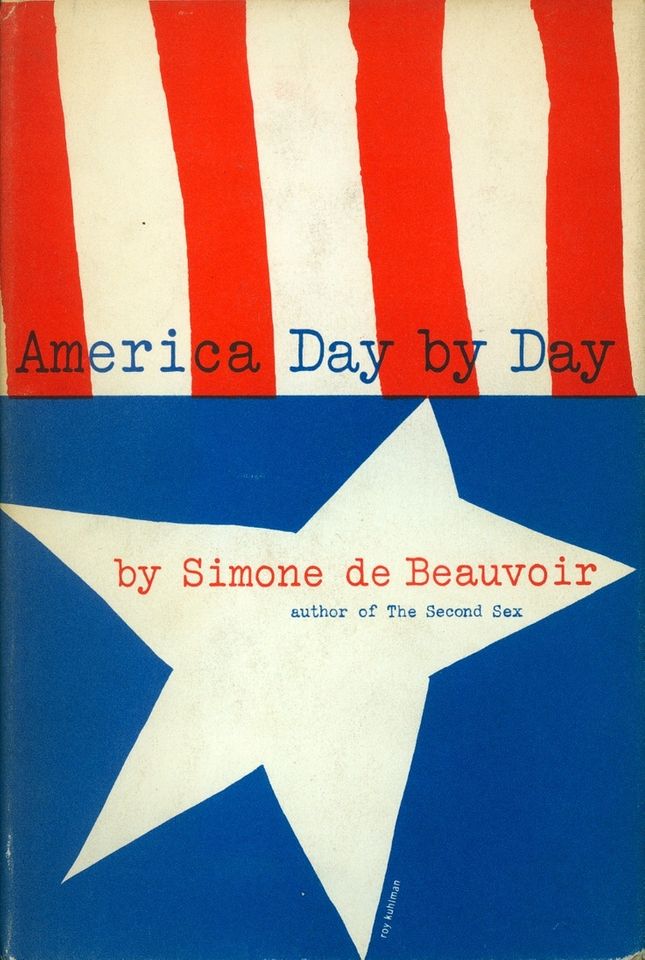 Seventy years later, as America enters another period of reinvention, De Beavoir is the inspiration for our own road diary from America. Like De Beauvoir, we are traveling far from the safety of our own cultured circles, from the hectic glamour and social whirl of art fairs, gallery openings, and biennales; inviting artists to exchange the comfort of their urban studios and art-world schedules, for the visceral realities that only a road trip into the unknown can bring. And unlike De Beauvoir’s account, the Culturunners diary will be defined by multiple artists’ voices, traveling from the Middle East to the US (many for the first time) across the perceived ideological, political and cultural divide between East and West.

A homeland security officer flicked through the Saudi visas in my passport. He shouted across the immigration hall: “Hey Joey… is Saudi Arabia on that list?”

“It’s not. I checked before I came.” I responded quickly, pointing out that I’m a ‘Cultural Diplomat’ (in my best British accent). He ushered me through, back into America.

The artists Sara Ouhaddou, Marwen Farhat and John Mireles left to pick up the RV from the truck repair shop in New Jersey—new brakes, windscreen wipers, wing mirror, seat belts, back lights—and head West towards Memphis. The plan is that I tie things up at the New York studio and meet them at the Graceland RV Park in a few days.

Sara is an artist from Morocco, Marwen a photographer from Tunisia and John a photographer (and my RV driving wingman) from San Diego. They left the security of their homes a few days ago, and are full of trepidation (mixed with an excited sense of timing) about the upcoming journey across “Trump’s America”.

Outside the studio, the New World Trade Center casts a shadow over the icy Tribeca streets. Through a frosty window, I can see Trump’s orange glow infecting the atmosphere of an after-work bar in this affluent neighbourhood on the edge of Manhattan. You can feel a tangible pessimism.

I walk west from the studio to the water, looking out across the Hudson to New Jersey and beyond; in the clear distance stands the Statue of Liberty (a Saudi student in Maine recently told me the original design was based on an "Arab woman wearing a modest robe and a crown"), and Ellis Island, where an exhibition about Little Syria, the first Arab American community in New York, has just closed.

It’s cold and dark when I return to the studio in the basement of a grand stone building (apparently owned by a “Middle Eastern businessman”) on Duane Street in the heart of Tribeca. I spent last year working with Abdulnasser Gharem and his Riyadh-based collective, known as Gharem Studio, to transform what was a private basketball court for the owner into a workspace and a safe-haven for a stream of resident artists from Saudi Arabia.

The studio acts as our HQ for residencies and exhibitions across the US and is part of a major Saudi-American cultural-diplomacy project headed by The King Abdulaziz Center for World Culture, a “museum of the future” about to open on the site of Saudi Arabia’s first oil field in Dhahran. Since last year, we’ve been working on behalf of the centre to produce ten Saudi art exhibitions in ten cities across the US. This year we’re planning exhibitions in Los Angeles, Detroit, Salt Lake City, Washington, DC, New York and hopefully Memphis. When I’m in sales mode, I call it “the largest ever cultural diplomacy project between the US and Saudi Arabia”. The timing is perfect. 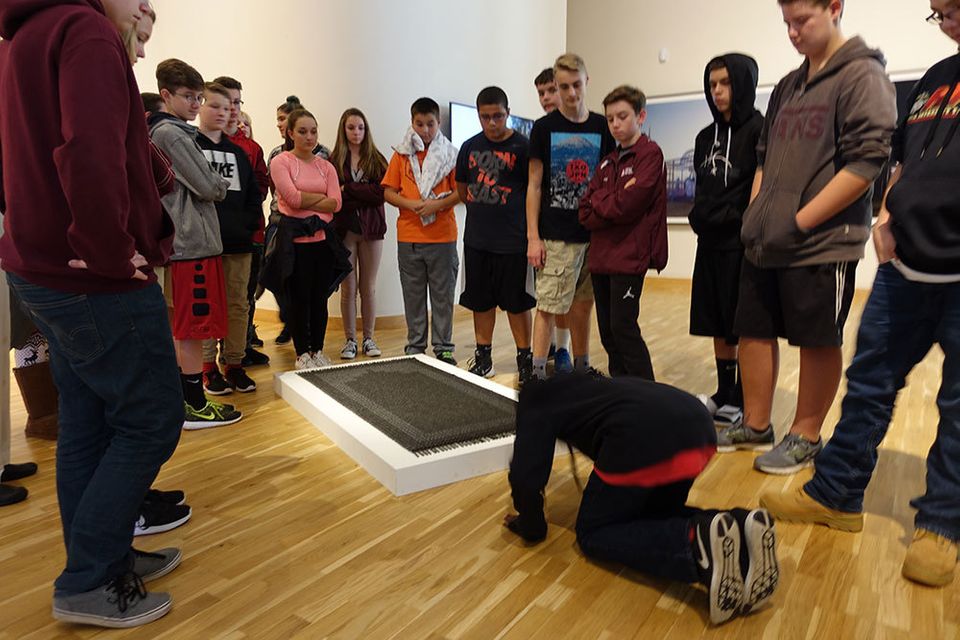 An educational programme for local schools at the Phantom Punch exhibition at the Bates College Museum of Art in Lewiston, Maine, October 2016

It has been 30 months since we launched Culturunners at the Rothko Chapel and set out on this journey; the first RV we bought (an elegant 1960s Diesel Pusher) lasted only 20 minutes before the drive shaft broke—after that I settled on a more practical 1999 model called Sun Vision.

The journeys so far have involved 53 artists travelling across 29 States; we’ve covered over 22,000 miles and witnessed timely news events from an artist's point of view, including Khaled Jarrar on the border wall between US and Mexico; Khalid AlBaih exploring Civil Rights along the Mississippi; a group of young Saudi artists confronting Islamophobia in Texas and most recently Ahmed Mater at the Dakota Access Pipeline protests at Standing Rock.

As we set off on the first cross-country road trip of 2017, following Sara Ouhaddou’s Out Among the Starsproject, I reflect on the journey so far; it was a different America when we set out back in 2014, in search of common concerns and unofficial histories to connect the two regions. Now, I wonder what "counter narratives" the artists will uncover as they embark on their American journeys at this unpredictable moment in history. 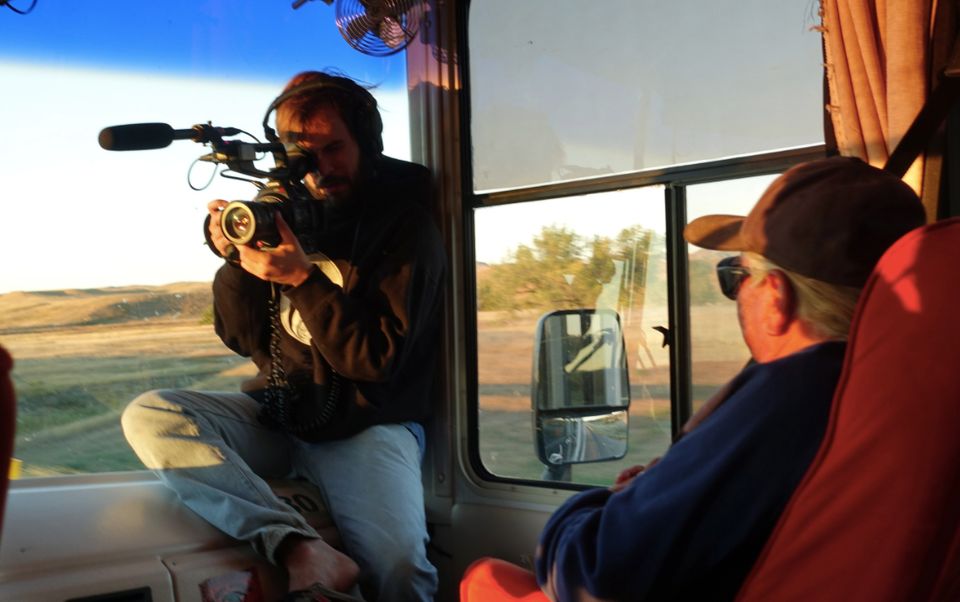