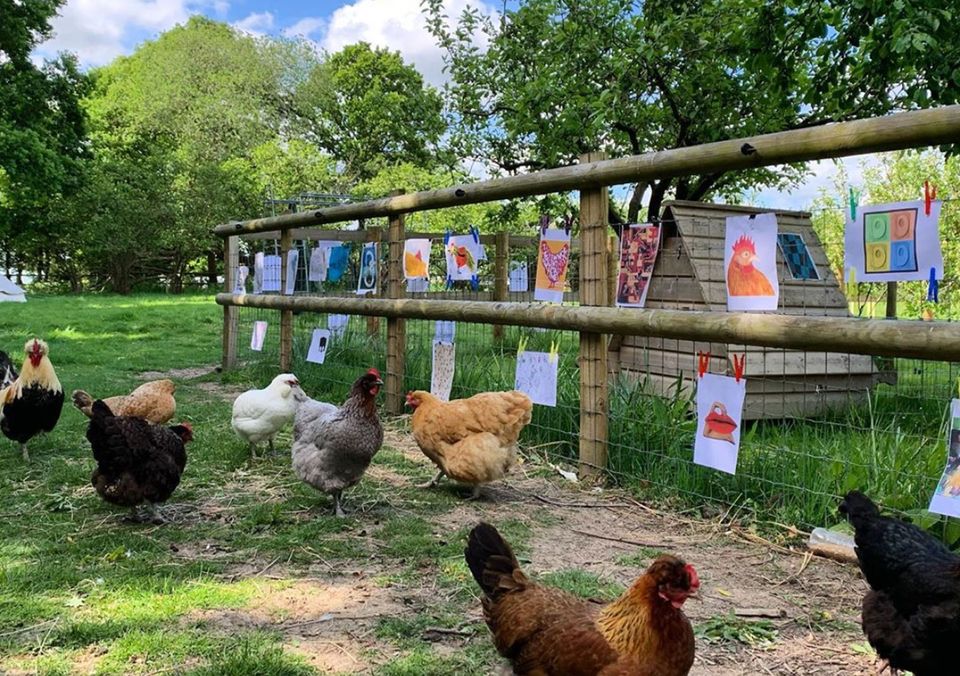 Visitors at the Exhibition for Chickens Courtesy of Jared Schiller

With museums still under lockdown and people hardly leaving home, opening up contemporary art to new audiences is an impossibility. And never mind trying to organise site-specific projects—that’s also off the agenda for now. But with his Exhibition for Chickens, an open submission show for artists to create works for the appreciation of his feathered friends, the film-maker Jared Schiller has managed to achieve both of the above. Some 50 artists including Richard Wentworth, Goshka Macuga, Amalia Pica and George Shaw—as well as many lesser known contributors from as far afield as New Jersey and Seattle, along with Schiller’s family and near neighbours—have contributed pieces for what is probably the world’s first exhibition for chickens. The show opened last weekend and runs until today.

“I’ve been absolutely staggered by how many people submitted works: students, hobbyists and the crème de la crème of contemporary art,” says Schiller, who put out an open call on Instagram on 22 April to submit works digitally, that could then be printed. A few pieces have been assembled in situ under the artist’s instruction, including Amalia Pica’s enthusiastically received Eat My Words, an intervention that involved writing on grains of bird seed.

It’s a curatorial debut for Schiller, who is best known for making films about contemporary art with artists, museums and galleries throughout the UK and internationally. He has been confined to his home in the village of Woodchurch in Kent, southeast England, with his wife Rebecca and two young children, as well as some 20 chickens, three geese, two goats and assorted chicks and goslings. With all his work on hold and after a few weeks of shuttered inactivity, the idea to create a show of works of art simply for the benefit of his poultry population began to take shape.

“Even before lockdown I was weighed down by the world and worried about the economy and the environment and everything felt incredibly serious and stressful,” he confided to The Art Newspaper. “But as lockdown continued it made me think I wanted to reconnect with people, and I thought I’d do something that no one else is doing and so there would be no pressure because it can’t be compared to anything else. People could either do it if they wanted or ignore it if they didn’t.”

And it seems that many have, ahem, flocked to take part and the Schiller family livestock are now sharing their existence with a plethora of works in all media. Inside one of the nesting boxes Goshka Macuga’s uncanny film of a gently snoring egg is playing on one of Schiller’s old iPhones. Among a multitude of works hung salon-style on the wire fence of the chicken run are prints of two new works by George Shaw, one of which is of a blackbird’s nest with eggs, as well as a series of signs by the Bristol-based artist Savage, making such statements as “Standing here, thinking of anything but art” and, “You wonder if people even like you”. Green Perspex sculptures by Jyll Bradley glint at the hen house entrances and along another fence enclosing the coop are three new photographs by Richard Wentworth of found objects and elements of human intervention encountered on farmland near where he is under lockdown. Other standout works include a film of dancer-choreographer Michaela Cisarikova out in woods performing her very particular rendition of Do the Funky Chicken; a Warholian rendition of Oxo chicken stock cubes by Schiller’s father in law; and a hybrid Chickysaurus painted by Schiller’s son Arthur. There’s also a rather insensitive print of foxes by Lynn Clemmer from Lexington, Kentucky.

So far, the response from the show’s intended audience has been mixed. In what Schiller calls the “broody coop viewing room”, mother hen Frisbee and her newly hatched chicks seem fairly indifferent to the Seattle-based Lyn Baum’s image of chickens playing scrabble. But out in the main enclosure one assembled work filled with bird seed and entitled Girl’s night out in Peck-ham proved to be rather too interactive and was rapidly shredded to pieces. “The chickens have definitely noticed there’s something new here,” Schiller says. And several pieces show signs of interaction by the livestock: in one particular instance of over participation, one of Bradley’s Perspex works had to be retrieved from the mouth of Amber the goat.

Exhibition for Chickens meets Richard Wentworth to discuss the three images he has contributed to the exhibition, in this film made under difficult technological circumstances. #exhibitionforchickens #art #contemporaryart #poultry

But perhaps it is all a matter of perception. Accompanying the exhibition are a number of Instagram interviews and live feeds in which many of the participating artists talk about the rationale behind their supposedly avian-appropriate works. Schiller’s children also offer a memorable tour of the wheres and whyfores of their own exhibition highlights. A reciprocal insight into a bird’s eye view is also offered in an illuminating interview between Schiller and the ornithologist Graham Martin from University of Birmingham’s School of Biosciences. According to Prof Martin, unlike humans with their frontally placed eyes, the side-placed bird’s-eye view results in a very different ambient experience. This all-encompassing vision means it is much harder for a chicken than a human to remove a work of art from its sight—to chicken out, as it were. As Professor Martin says: “If I go up to a work of art and think it’s rubbish, I can walk away. But a chicken has to walk a long way before it doesn't see something. The world flows all around and even above it.” Therefore, it is perhaps for the best that the chickens wopn’t be exposed to this all-immersive introduction to the world of art for much longer.

We, however, have the option to go on enjoying the various incarnations of this most particular show in the accompanying films, tours, interviews and footage of works that remain up on Schiller’s Instagram as well as being viewable on his Exhibition for Chickens website.