Andy Holden inside a mobile cart at The Structure of Feeling (A Ghost Train Ride), showing at Block 336 Gallery, Brixton

The urge to encounter art in a pandemic has led to drive-by art shows in LA, a drive-in exhibition in Brescia and drive-through works of art seen from a fleet of electric cars, courtesy of Rotterdam’s Museum Boijmans Van Beuningen. Now in South London, the latest moveable Covid-free art experience comes from the stately-paced vantage of a converted mobility scooter, courtesy of Andy Holden’s The Structure of Feeling (A Ghost Train Ride).

Back in March lockdown meant that Holden had to close his exhibition of new work at Brixton’s Block 336 Gallery before it even opened. But this surprise turn of events also gave him time for a grand re-think as to how his shuttered show could operate in whatever new normal eventually emerged. The reconfigured result is The Structure of Feeling, the ultimate socially distanced exhibition, in which three separate visitors at a time are able to trundle solo in their own customised vehicle through the cavernous space of Block 336.

In the past, Holden has explored the crazy physics of the cartoon universe as a metaphor for a precarious world in which anything can—and does—happen. A world where if we just keep running we might not fall. But now, as the current state of our contemporary existence has proved, the entire world is free-falling and Holden has called a halt to his high-octane cartoon capers. Instead the lone visitor is invited to embark upon an immersive ghost ride through what Holden describes as a “post-cartoon landscape”, following a pre-determined path where unfolding wall-to-ceiling paintings, cut-out sets and sculptures, which evoke a deserted desert, empty forests, a haunted house and an abandoned city. 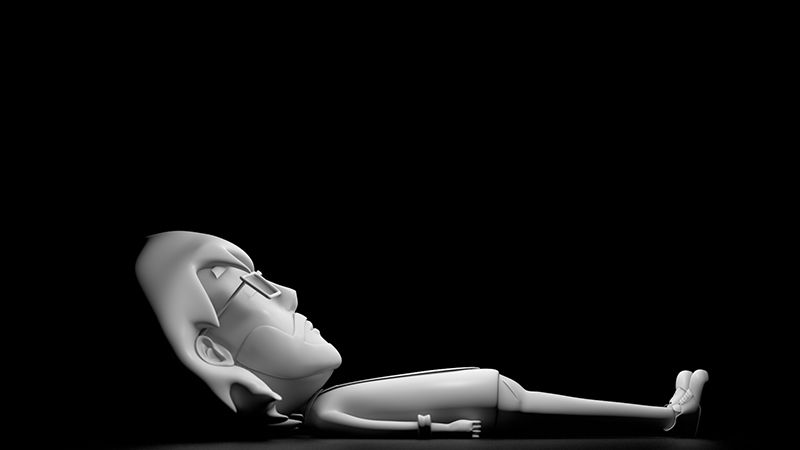 Holden's ghostly avatar makes appearances throughout the experience © The artist

Punctuating this bleak, melancholic, but also absurd terrain are a series of four animated films in which the Holden's avatar aimlessly wanders through each of these different scenarios, while fruitlessly attempting to reclaim his own bodily experiences and re-engage with his physical surroundings. He intones Wordsworth’s Preludes (1799-1850) as he ambles through a Disney desert; invokes Thomas De Quincy and his own teenage drug experiences in an empty animated forest; and Scooby-Doo haunted houses form the backdrop to extracts from Sigmund Freud’s Interpretation of Dreams (1899). In the last film made just before lockdown, Karl Marx is forced into an unholy and futile alliance with The Flintstones’ shopping malls.

There’s more disorientating discombobulation as every ten minutes the entire space is plunged into darkness and a large 3-D film transports you into a far-reaching cosmos inhabited by cartoon constellations and floating eyeballs. This galactic interlude plays out around a giant sculpture of Holden’s cartoon alter-ego lying prone on a giant plinth that could also be a sarcophagus. Is he dead or just having paranoid spacey dreams? Either way, his cut-out silhouette punched through an adjoining wall tells us that the cartoon Holden has now left the building.

This lonesome artistic version of a ghostly fairground, littered with mashed-up cultural references and replete with melancholy, disquiet and angst forms a fitting parable for our times. We are literally flung back into a reality dictated by our own bodies and, along with Holden, then forced to try and figure out how to exist in a world that may look ostensibly familiar, but has become alien, hostile and uncertain. The limitations imposed by Covid have indeed become the content of the show. Buckle up for a slow burning but bumpy existential ride...

The Structure of Feeling (A Ghost Train Ride), Block 336, until 24 October