Plus, painting under the influence of Viagra There was enough star wattage at Hong Kong’s annual Amfar (Foundation for Aids Research) gala, at the new Rosewood Hong Kong hotel, to light up Victoria Harbour. Celebrities such as Pharrell Williams and Heidi Klum gathered to honour the entrepreneur Adrian Cheng for his contribution to the fight against HIV/Aids. A hefty $2.8m was raised in a lively auction that included top-notch lots such as a work of synthetic hair extensions on wood by the Icelandic artist Hrafnhildur Arnardóttir (aka Shoplifter). 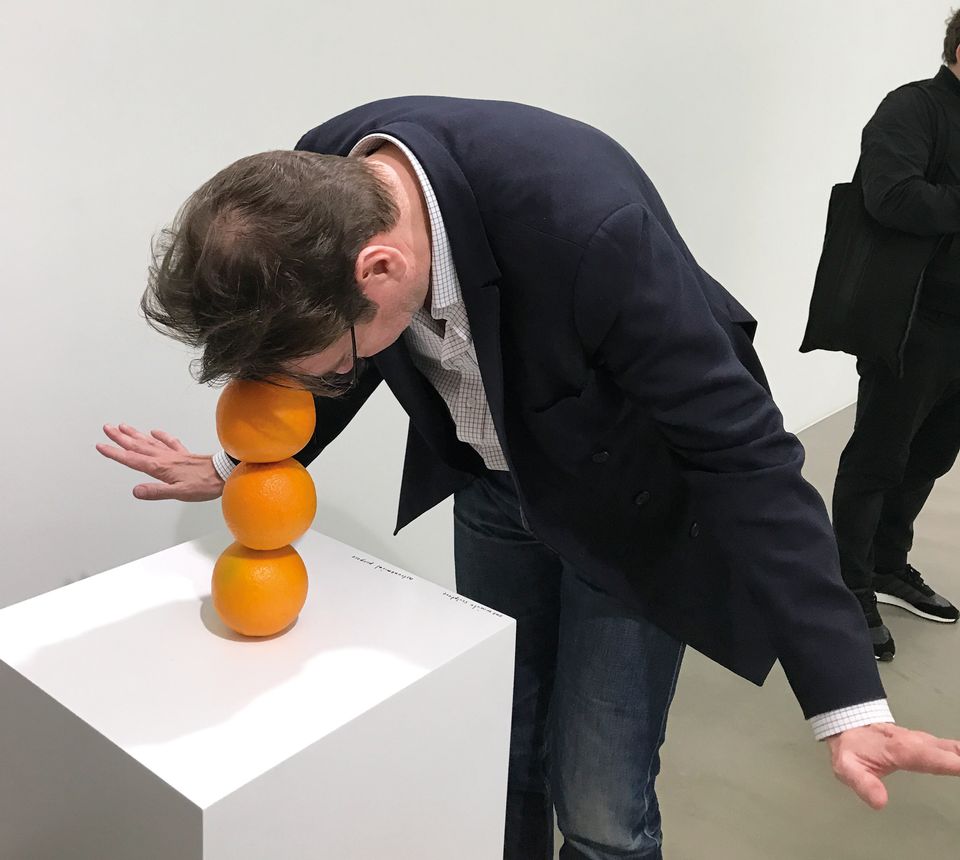 David Maupin gets close to the art Photo: Gareth Harris

Have you ever felt the urge to build a fruity monolith out of three oranges, using only your forehead? You can at Lehmann Maupin’s Pedder building gallery, currently showing the Austrian artist Erwin Wurm’s celebrated one-minute sculptures (until 11 May), which invite visitors to pose and play with mundane objects. The dealer David Maupin has sussed out the best technique to tackle the trio of oranges. “You need the right amount of pressure—don’t push too hard or they’ll fall,” he counsels, proffering a wealth of unexpected advice on fruit-stacking. 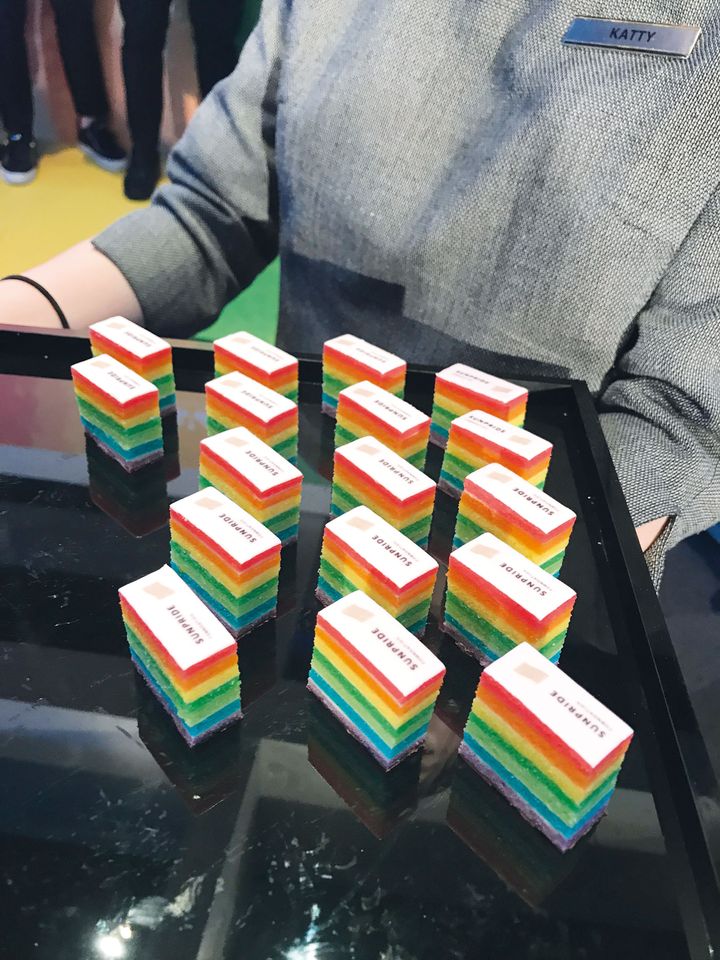 A cake of many colours

Everyone had a gay old time at the Grand Hyatt hotel earlier this week when the cream of Hong Kong’s art world gathered to celebrate the LGBTQ exhibition, spectrosynthesis II, Exposure of Tolerance. Guests at the party toasted Patrick Sun, the man behind the Sunpride Foundation, which is organising the show. But the star of the evening was the specially-made cake, with Ingar Dragset, of the artist duo Elmgreen & Dragset, saying: “You just can’t say no to a rainbow flag.” KAWS gets cut down to size

Not everyone in Hong Kong is caught up in KAWS mania. The Italian curator Franceso Bonami took to social media to vent his feelings about the ubiquitous street artist’s exhibition at PMQ (KAWS: Along the Way, until 14 April). In a film on his Instagram account, Bonami takes a pop at Germano Celant, the show’s renowned curator. “Celant was the founder of the most important movement of the 20th century, Arte Povera. Today, he is curating this exhibition. It’s like Zinedine Zidane, the coach of Real Madrid, going to be the coach of Venezia. It’s a very popular name but at the same time, it’s a lousy football team.” Ouch. A woman under the influence

The Swiss artist Pamela Rosenkranz got all hot under the collar for her latest series of paintings on show at Tai Kwun. They were all made under the influence of Viagra, the pill used to treat erectile dysfunction. The blood-red works, subtly titled Sexual Power, are part of the exhibition Performing Society: The Violence of Gender (until 28 April). An accompanying text points out that Rosenkranz’s sexed-up series is a wry comment on macho art movements such as Action Painting. Let’s hope that the Viagra-charged creative experience was not too hard on her. 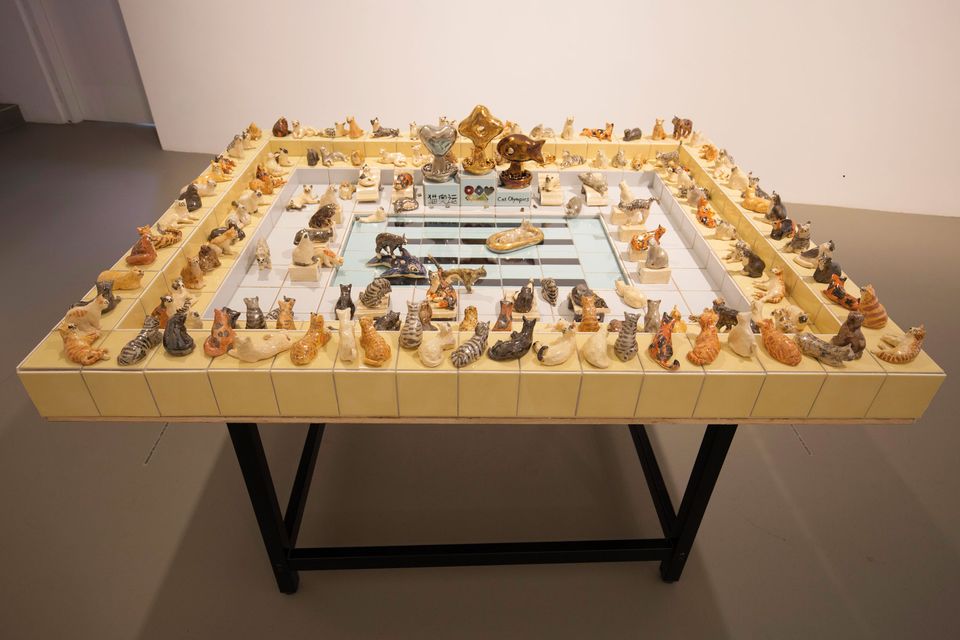 Cats are not known for their sporting prowess, so Nobuaki Takekawa’s Cat Olympics installation at Ota Fine Arts gallery is making fairgoers at Art Basel Hong Kong smile. The Japanese artist has imagined an Olympic Games populated entirely by moggies. The new piece—comprising watercolours and a ceramic swimming pool showing kittens and cats lounging and licking themselves—heralds the arrival of the Olympics in Tokyo next year. “It is supposed to be a competitive event but the cats couldn’t care less,” a gallery spokeswoman quips.