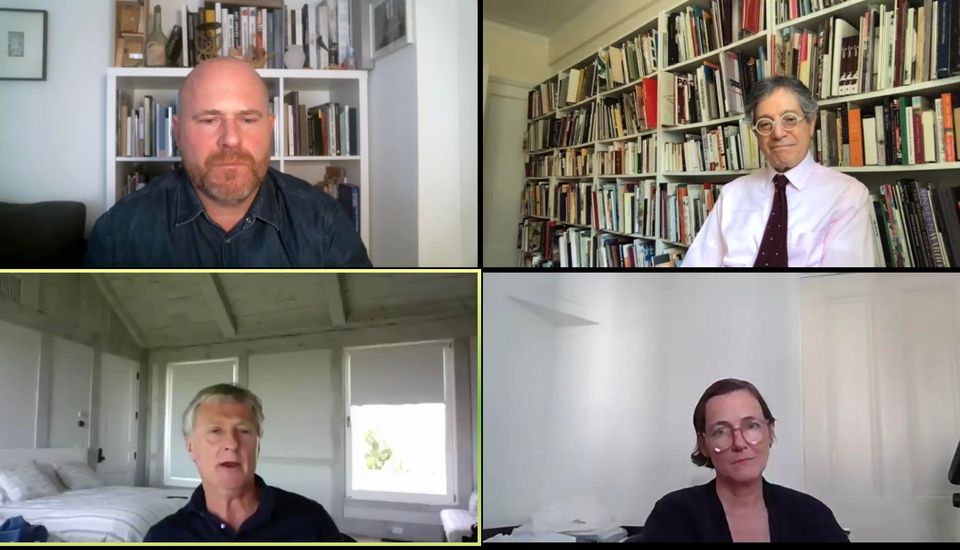 The collegial spirit that has emerged as a positive byproduct of the coronavirus pandemic got a good airing during last night’s Art Basel webinar devoted to "New Gallery Collaborations During the Crisis". On the Zoom panel were David Zwirner (in his Montauk bedroom), Sadie Coles (with guest appearances from her son and cat) and Jeffrey Deitch (and his bookshelf), moderated by Art Basel's global director Marc Spiegler .

Each of these mega dealers described how they have responded to the crisis with initiatives that reach out to colleagues across the sector. Despite being branded a maverick by Spiegler, Deitch has joined forces with his Los Angeles compadres as the main instigator of Gallery Platform LA. This online initiative launches today with 81 of the city’s galleries large and small, emerging and established, joining together “to promote engagement with a local and international art audience.” Every week there is a rotating presentation of ten gallery platforms along with one curated project, with each gallery appearing on the platform once every eight weeks. There’s also an archive section devoted to LA’s rich gallery history, with Deitch stressing that the platform is not exclusive but open to “every serious gallery in the city.”

Speaking from what tantalisingly looked like his bedroom, Zwirner described himself as “a veteran of shutdowns”, having weathered gallery closures due to both 9-11 and Superstorm Sandy in 2012. In the face of Covid-19 he has quickly followed his own advice of “looking out rather than looking in” by opening up three "Platform" viewing rooms on his gallery's website. Here, 12 young galleries from Los Angeles, London and New York each show the work of a single artist. A further Paris/Brussels viewing room is slated to open on May 22. “It was a really nice way to get back into the game” he said, adding that it was also an effective way to get his collectors “to look at interesting art.”

When all London’s commercial galleries closed due to lockdown restrictions on 16 March, Coles’s response was to open a WhatsApp group where she and colleagues could pool information and offer each other support on “logistical questions – furloughing, negotiating with landlords and staffing issues.” There are currently 85 members of this group from sixty of London’s galleries, with not only the directors but also general managers and other members of gallery staff having what she describes as “wide ranging conversations” and benefiting from “collective action”—including, as she added wryly to Spiegler —“some negotiating with art fairs.” Although the group is private, Coles reveals that there are plans to launch a more public face in the form of a London Collective platform in the near future, in a model similar to Deitch’s in LA which Coles described as “genius!”

So will all this communal spirit and altruism endure after the Covid crisis? Apparently yes. All three panellists believed their initiatives would survive beyond, but they were also keen to stress that, while undoubtedly beneficial in sparking conversations with their collectors, the new platforms should remain underpinned by collegial rather than commercial principles. According to Zwirner, they are successful precisely because they were “not a business model” but a “curated model”, put together by “peer selection.” Deitch stated that “the sense of urgency that had spurred all this effort and level of collaboration that would not have existed before” now needed to be maintained. “We need to work together create an infrastructure that is sustainable,” he said.

Key to this sustainability was to support younger galleries and all three also felt that this new spirit of communication was the way forward. “I’ve never had more conversations with collectors, colleagues and my own family,” said Coles while Deitch noted that in this new co-operative environment, galleries were already selling each other’s works and that “collaboration is only going to add to business.”

Then of course there are the artists, many of whom (their galleries report) have benefited from time off the art market carousel. “We’ll be seeing a lot more great work coming from artists' studios," said Zwirner, who got in a quick plug for Josh Smith’s lockdown roof top show, titled High as Fuck. Coles also stressed that “the beating heart of every gallery is the artists and the work they are making for you”, and flagged up her artist Darren Bader’s Inventory 19 Project.

The big three all agreed that the digital offer had been radically upped by the coronavirus lockdown, but emphasised that physical space remained crucial . “It’s not either/or but shoulder to shoulder, we need physical space but that is by its nature one location,” said Zwirner, “you can deliver online in parallel, and contextualise [the works]. There’s a much richer experience coming our way.” Coles agreed, stating that online viewing rooms should be: “Less like a commercial selling platform and more like an artist’s book—we need to work with the artists to make something special, unique and genuine.”

So if this conversation is anything to go by, it seems that this united gallery front might be here to stay – for the time being at least. According to Coles: “The key to collaboration is transparency and equality— just do as much of that as you can.”