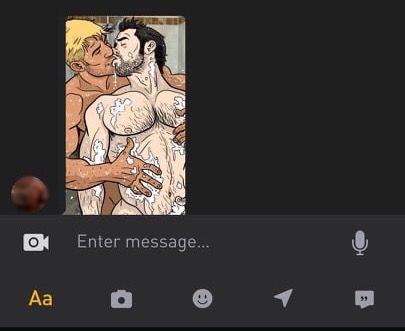 Ever been scrolling through Grindr and thought—"this is nice but I wish there was a space where I could share my creative talents and talk about politics”? Well, have no fear. In the past few months a new "Circle" feature has appeared on the LGBTQ dating app, inviting users to discuss their favourite games and Drag Race contestants; promote activism and Pride; and share art and queer photography.

While we could not find any official announcements about the new feature on Grindr’s website—and the app did not respond to a request for comment—confused subscribers have taken to Reddit to discuss these latest developments. Apparently, once you click on one of the Circle's sections it takes you to a chat room with other randomly allocated people, to discuss the chosen topic.

A screenshot of the different sections in the Circle feature

While the art section invites users to “share, celebrate, critique and give friendly advice” on one another’s art, many have reported that it is mostly full of… well, nudes. "Supposedly it's group chats about specific topics, but this being Grindr they're all just streams of unsolicited dick pics," says one Reddit member.

But some say the new cultural sections are not all bad. An anonymous Grindr user tells The Art Newspaper: "I usually go on Grindr for a less creative sort of stimulation, but the new feature makes a welcome change." Another comment on Reddit adds: "I join the Gamer chat a lot and people genuinely want to have conversation there."

The combination of art and Grindr may seem odd to some but one user tells us he sees a lot of similarities between the two worlds. "To the lesser informed, parallels between Grindr and the art world might seem scant, but any size queen or rugged bear knows that the experience of using the app is not unlike attending a gallery opening—you’re usually drunk, being sized up in every direction, you speak to lecherous guys and come away feeling hollow and debased," he jokes.

“I love the idea of art-sharing among my fellow gays. I've had some genuinely lovely conversations with people about it," another anonymous user tells us. "We've shared ideas, appreciated each other's work, given notes where necessary. It adds a certain frisson when these lovely, engaging conversations are interspersed with photographs of cocks and arseholes. After all, who can truly say what is or isn't art?” Well, quite.