Dispatches from our Man at the Antarctic Biennale: a whale of a day

Wednesday 22nd March: So gloomy outside porthole, rain on the sea, distant white smudge of ice, Paris slate grey morning like going to school. This place is plain nasty, absolute cruelty and indifference, the very definition of ‘inhospitable’, and it takes the maximum high romantic shift in our sensibilities to now consider it ‘beautiful’ rather than just the bleakest spot on earth. No consideration whatsoever of its tourists, cares not a jot for them. Walked on deck with rain lashing the choppy ocean, floating chunks banging past like outsize ice cubes on a Rosenquist highball poster. Breakfast with charming Kaspersky employee from Kalinigrad which used to be capital of East Prussia, warned him our young Bismarck might try get it back. Apparently Kaspersky considers the likes of Snowden and Manning as straightforward ‘traitors’; curious they should both be, like me, Welsh, with Bradley betraying not only his country but his sex.

All braced for old English Port Lockroy where guardians stay for five months with absolutely nothing, no shower, no loo, poo and pee in buckets, yet thousands of applications from all over the world, one of most sought after places to live such is our urge for exotica. But our mission cancelled, just too rough, instead I walked deck amongst drifting snow-sleet. Zhang Enli actually painting thick black ink on his sketchbook in these hostile conditions, dipping his ancient brush, abstract horizon line on page. 'Conceptual' artists are often more in touch with traditional techniques than one imagines, but do wish at the next Antarctic Biennale they would push the variety even further, have a botanical watercolour specialist, professional maritime painter, wildlife draughtsman, mixed in with the young hipsters. Someone like Walton Ford in fact.

Group of penguins in distance, spread out in line, then comically gathering round in circle for a conference, they must be the most loved animals in world after dogs and cats, and much harder to encounter. In fact some tourists come here just to see them, for to quote Melville: “Nature keeps this ungainly child hidden away at the end of the earth.”

Presentation by ‘Big Ben’ Kuzkin, only 37, was graphic designer until ten years ago when decided to make work for his own soul; images of him trudging for five hours in a circle of liquid concrete as it gets harder and harder, quite literally. Dedicated to his Jewish grandmother, her long and difficult life. Writing names in English and Latin of different diseases onto his own body in the appropriate places, lying still naked, five hours like a  dead man in perspex case. ‘Schizophrenia’ written in capitals on his brow. “I need to feel tired after a performance.”

Much discussion of how these meetings and presentations are very “bottom up”, especially in the case of Kuzkin. A heady debate about how “we have built an image and idea of Antarctica before we came here” and how we might preserve the enormous amount of conversations every day — record all these spontaneous collaborations and connections.

As we talk indoors, our ship is slowly passing seals lying on icebergs very like slugs, limaces, black on the electric blue, and the hard sleet blowing against us. How to describe all this? One could devise a computer program to analyse the best writing about Antarctica, the most evocative quotes, which words most utilised, most accurate descriptions, frequency of usage, ‘blue’, ‘white’, ‘cold’, ‘icy’, ‘cathedral-like’. Yto shooting outside on Super 8 trying to capture the German Romanticism of it all, indeed Casper David would go crazy here, just explode, all too too much for him.

Out in our Zods to look for whales and they were everywhere, right next to us, some ‘logging’ when they sleep on the surface, as the wonderful penguins go ‘dolphining’ flying past us. The penguins zooming through sea, arcing up in whole shoal whilst group of whales like Nuclear cones rising black to the surface; three sorts of submarines, fuelled by nuclear, diesel and krill. Ah, their joyous spray in air like so many mobile versions of Geneva’s famous  fountain, we were so close actually doused by their juices, only water I trust not some Heathcote ‘money shot’. Their misty spray like old fashioned musket grapeshot clouds in air or Cyprian Gaillard explosion, a whole sea of them at same time looks like a Napoleonic battlefield re-enactment, small puffs of smoke drifting everywhere. And then a huge, ancient head covered with whiskers like barnacles rears up right next to us, our guide never seen any that so close, amazing as they circle our rubber dinghies, could touch the black glossy slime if my arm stretched just a little further. Utterly extraordinary. Also bloody cold.

Zooming on to Ronge Island for today’s art installations, rather hard to compete with nature, especially as now we met a huge shoal of seals who swam alongside us, funny faces, big staring eyes, definitely showing off and checking us out, totally adorable, so sleek, too many to even count. On shore big bleached whale bones and one huge seal lying there just like a rock, also the ‘Egg Man’ and ‘Queen of Shiba’ with his weaving rope. Then suddenly, unexpectedly, ‘Big Ben’ was upside down once again showing off his tackle in the freezing blizzard. Much concern about hypothermia but Russian ‘performance artists’ are a strong breed. “Looks like he’s got a bee hive down there” remarked one female admirer. 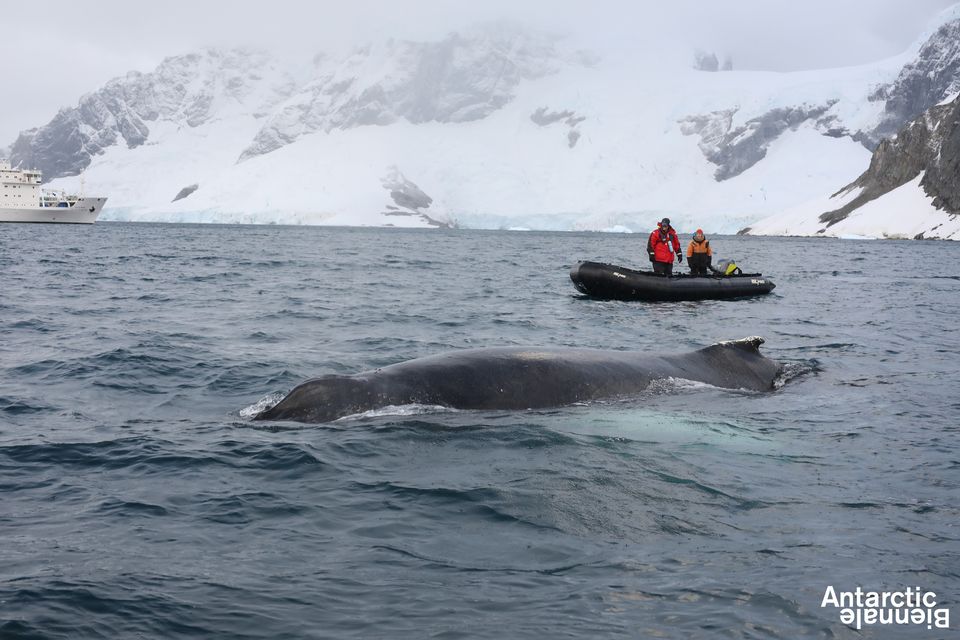 Very happy to get back to the boat where the whales were now circling round and round us in groups, spraying, diving, flapping their giant fins as if waving

Very happy to get back to the boat where the whales were now circling round and round us in groups, spraying, diving, flapping their giant fins as if waving. That sound they make, a low sonar boom, like the hollowed-out roar of a lion from deep within the ocean, you can tell they are somewhere nearby — triumphant spray of their emergence. Clearly performing for us, to great applause one SURGED completely out of the sea, so high in the air, all of that giant body exposed, as if a rocket, then crashed back down with giant tidal splash. Had never seen one fully leave the water, definitely done for us and after that they all drifted away, the show was over with a spectacular finale.

Who is the mysterious, beautiful redhead Juja Dobrachkous? Many rumours float around her, one of the discretely wealthy Russians on board who live in London and only travel on British passports. Rather like Madame Chauchat, I first notice her in our restaurant retreat, our own ‘Magic Mountain’, she was married to a famous film producer, long lived in LA and has published a collection of short stories. She asks if I would read out loud her bizarre and wonderful tale about a certain Mr Oddly, living, like her, in Westminster who adopts his own tape worm. This event takes place in the library, everybody’s favourite, most civilised room on the boat, and I do my best with a surprisingly large audience. Tinkling audio accompaniment is provided by Paul Contreras, just as at my teenage poetry performance at Cabaret Futura it was Depeche Mode in their first London performance. Just the sort of ‘inter-disciplinary collaboration’ the AB adores.

Happy to bed sober at 10.30 after “a whale of a day”. Woke in night and outside could see one strong white light shining at us, another ship, the very first since we steamed out of port. We had not seen another boat, building or human being, nothing but ourselves, since leaving Ushuaia.