Dispatches from our Man at the Antarctic Biennale: an underwater art show

Thursday 23rd March: Actual sunrise on the sunken Alps. For the first time on our journey we are greeted by real sun, walking on deck at 7.30 magnificent, unbelievable snowscape all around with pink lit crests. And then — as if the landscape was not astonishing enough in itself — two whales emerge with their spray, that baby noise of blubbery lips being blown, a cheery raspberry greeting. HUGE whale head right next to me, completely prehistoric, covered in stuff, turned and gave me a little show, the sheer shine and gloss of the black surface as it moves, maybe dived back under the boat. There are so many of them, the great and recent success of their being saved as species, one becomes blasé, almost forgets them, “Oh yes, just one more giant whale.”

Heading to Cuverville Beach, as cloud cover now broken we need sunscreen, one can get sun burn down here in matter of minutes.

“Gangplank at ten o’clock” and Zod to beach. Whilst waiting to embark we were circled at shocking proximity by two whales, right next to us, a barnacled face emerging just inches away, massive splash of the tail. To be honest I was frightened we were going to be overturned, they might come up underneath, seemed borderline hostile, dangerously close. Our Canadian guide in ecstasy, “Oh my God!” and much applause, he has never known them to get this close. The HUGENESS of these things, their shiny blackness mimicking the rubber of our dinghy, or vice versa — making that noise of a dyspeptic English gentleman blowing his lips in disbelief at his club. But basta enough about whales.

Typical barren beach; Joaquin Fargas putting reflective silver sheets over the rocks to try and help stop global warming whilst the young architect Gustav Düsing was busy with his white cotton tent, sprayed with water to freeze rock-solid like salt or Greek marble drapes. Revelatory that back in Berlin he was able to freeze it successfully at night whilst here it is just not cold enough, and if you can’t freeze a sheet in the Antarctic where can you? He is not allowed to stay on shore through the night when it might work. Indeed the first actual sun rays touching upon myself since standing outside Buenos Aires airport. Rather effective photo exhibition using special plastic display boxes on tripods mounted in the water and along the beach, the horizon line in a photograph next to actual horizon on the sea. 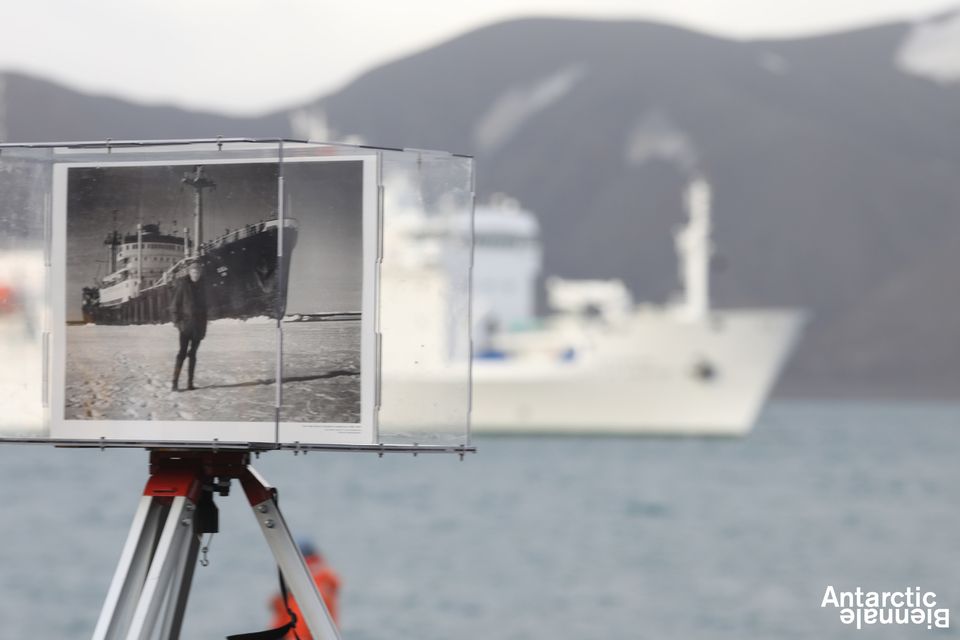 Dead penguins everywhere and impressive Paul Nash whale bones probably from 100 years ago when we killed them on these beaches. The stench of guano can be like burnt saucepan, white hot metal almost ready to melt. Great fun the weird seals higher up the beach all fighting each other playfully, heads straight up in air, staring into sky, whiskers bristling, then baring their fangs, weird noises like female orgasm (what would I know) high pitched and occasional deep rumble. They waddle along, so ungainly, like some wounded giant pulling himself along the saloon floor after a shoot out, the wobble of all that fat mass. One flops down to the sea and vanishes into it, their real element, head held so high, big eyes glistening, ready to bark.

Mexican lunch and everyone having happy snooze. At 4pm it had been a week since we first came up the gangplank and boarded this boat, now our dear old friend. All gather on the back deck for Alexander-the-Great, Pon-Pon lui-même to launch his own underwater art project, ‘Alchemy of Antarctic Albedo (or Washing Pale Moons)’. These submerged lit globes will be lowered into the sea in order “to clean the moon ash”. He happily admits that he is making this work just for the whales, typically generous, “they are a better audience than so many others”. Alexander Sekatsky, his in-house, or rather on-board, philosopher, explaining all the “metaphysical correction” which sounded exciting. Much masculine labour, heaving and pushing, to get the moon-balls out to sea, a sweaty, rather laborious form of three-dimensional poetry. We went out in our Zods but of course could not see anything of the project because it was all underwater, made for the fishes rather than mere humans. However the two Argentine underwater divers, fantastic moustachioed veterans straight out of Hemingway, who had been very dismissive and suspicious of the whole thing, were actually impressed, touched, transformed by seeing the reality. Which makes it a successful art work by any definition, and the whales apparently surely adored it also. 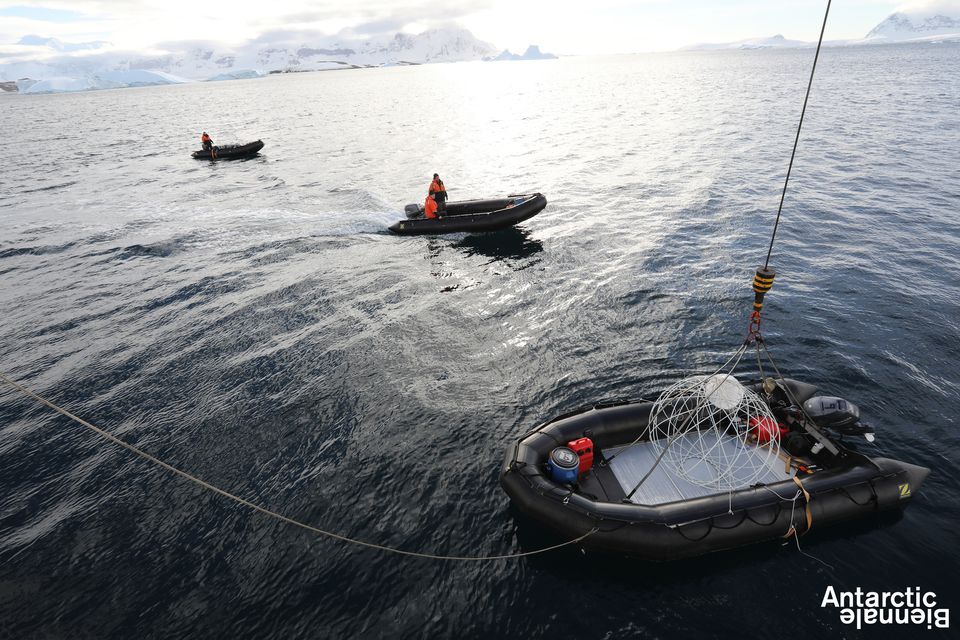 Sublime sunset and Susmita making her video project on ‘memory’, what we will remember, everyone trying in their own way to store all this, fix it forever. All of us using different methods, or the same, video, Super 8, photos, sound recordings, words, sketches, doodles. But even this big ship filled with so many witnesses, writers, journalists, artists, filmmakers, will vanish, will cease to exist, will be wiped out from the world, from our memories, all our tapes will eventually be left as blank as ice.  The wonderful naval flags being put away, reeled down with sunset behind. Wondered what message they spelt out and asked the droll Russian Captain: “They are just nice flags, we only put them because artists here on board, just for artists to look at.”

At dinner I subtly quiz John Royall about Bush, being from so Texan a dynasty, and he amusingly recounted recently dining with his mother and George Senior; his ma had asked the great man just one key question: “Do aliens exist?” George looked straight at her, lowered his voice and hissed, “Yes”, in an affirmative whisper.

Pon-Pon wanting me to sing Welsh songs; he had been so overcome by so many whales and the triumphant launching his own ‘ash whale moons’ that his classic dinner speech had just been, “I wanted to say something — but what can I say? What can I say?” Thunderous applause.