Dispatches from our Man at the Antarctic Biennale: Desolation Island

Saturday 25th March: Blurred tannoy at brutal 6.30 and staggered out on deck, wind blowing strong and wondrous vision of our approach to Deception Island, the sun breaking out from behind us lighting ancient the red rocks like Uluru, and through into the volcanic bay beyond. Magical dawn light and this sheltered cove. But the sun vanished as we embarked onto this desolate stretch of black volcanic beach, ‘Whales Bay’; old metal brown tanks for whale oil, collapsed buildings, decaying corrugated iron, perfect subject for any gloomy British 1950s abstractionist, drab colours, jagged and black and cold. Filled with mean seals jousting and battling and ready to attack. So inhospitable, the nastiest place we have been ashore, indeed one of nastiest places I have ever been, such bad karma from mass-slaughter, sulphur stink, stained black by the sins of the giant murders that systematically took place here. The giant Richard Serra rusted tanks, spooky, and collapsed wooden buildings, should really be called ‘Desolation’ Island. It started as whaling station in 1911 and all the bleached carcasses of boats, wood like ancient fossil buried in the sand. The whole bay is an active volcano  since 1800, in 1967 a full explosion drove out the British base, they came back but in 1969 it blew again. The lava covered grave of one A.H. Farrant, God how lonely a place to be buried.

Avoiding the snapping seals we walked to the highest ridge, stark volcanic slope, and a view over the sea and little shingle beach below. One can see the magma, the actual rock of the lava flow. Here Nathaniel Palmer established a ‘sealing station’, which has such an efficient, scientific ring, but the hideous, reeking reality one would rather not imagine. This whole black beach so long given over to systematic slaughter. The only thing to lift our spirits was that Yasuaki Igarashi, the Queen of Shiba, was finally able to fly his kite, a soaring treat as if designed by Emilio Pucci, wonderful 1970s candy stripes. A whole row of people with bare white legs in the steaming black sand, so warm from the volcano underfoot, digging my feet deep I feel the amazing heat seeping up from the broiling, angry ground. So happy to escape back to our boat from this accursed bubbling wasteland. 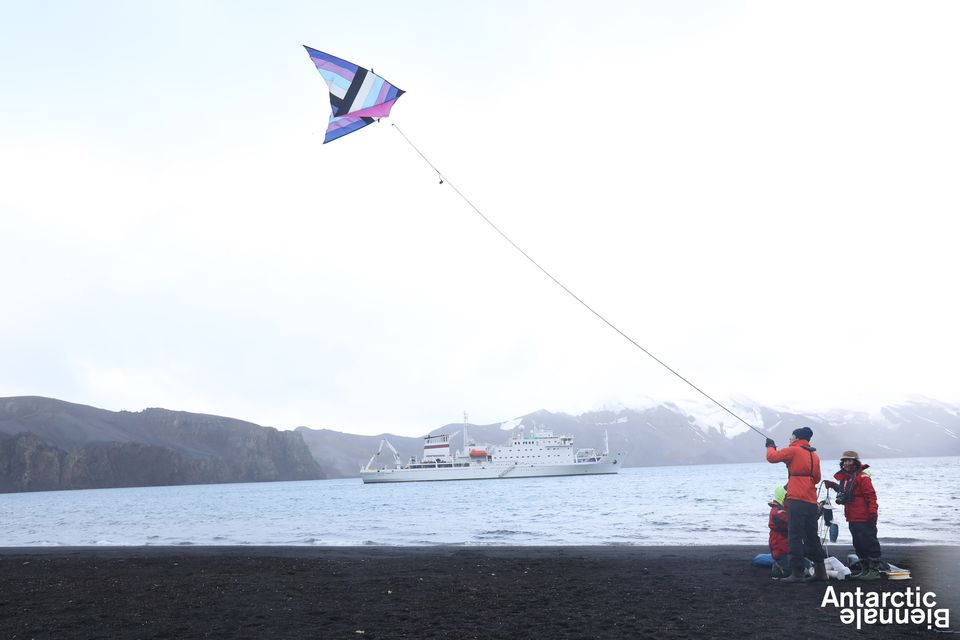 The only thing to lift our spirits was that Yasuaki Igarashi, the Queen of Shiba, was finally able to fly his kite, a soaring treat as if designed by Emilio Pucci, wonderful 1970s candy stripes

Sausages & potatoes, hurrah, and up to the bar for talk sessions; Philosopher Alexander Sekatsky on the need for ‘sacrifice’ to civilisation, a stirring discourse; contemporary art as willed madness, to switch us off from reality but whilst carrying no guarantee of being able to switch us back to transcendence. There are too many artists now, like sand on the shore, an opera playing with no audience, and a new sacrifice is needed. Our world is filled with sediment, needs to be totally destroyed as if by Shiva. “Don’t believe, don’t be afraid, don’t ask — and don’t be tired.” The old bearded Argentine diver fast asleep in corner, gently snoring. Lisen adds that in her ‘resilience theory’ one can have smaller destructions to maintain survival of the larger superstructure. Sharma leading round-table on art and science; “discussing language”, how to stop being an ‘unreformed positivist’, much irritation with this repeated mantra of ‘art-science’, our ‘provocations of the distinction’ and Nelson Goodman quote, “so many ways of world making.” Rizzo states, “we are all über-intellectuals here…” to which I can only camply respond, “Not me darling!”

In distance seeing the looming scientific stations, weird modernist buildings and searchlights, the glowing blue plastic domes of Chinese ‘Great Wall’ station, and right next to each other the Chilean buildings and rather more battered Russian Bellinghausen base. We arrived on shore right in front of the dilapidated Russian container huts, CCCP 1968 plaque and all the bleakness of the Soviet union at that time, only the Orthodox Church on the hill to sustain one. A warm reception in the base, one of the Russians had done a wonderful pencil portrait of Bellinghausen himself, and surprising to see a whole row of big art books including ‘Collage in Russia’, a proper art library ready for the long winters.

Trudged up the muddy black path to the church, a Tarkovsky or Béla Tarr landscape, the grey wooden Cathedral above us, and entering the golden dazzle of the interior could understand the medieval world, mud and desolation, cold and drizzle outside and the warm gold, the beauty of this one place, the only source of rich salvation. The priest chanting-singing in the back, hidden from view, putting on a little show and then came out for us, bald, shiny faced, bearded, been there four winters, could pass for a Shropshire Parson with his shy smile and modest voice, blushing easily. Though I could have stayed there all day, decided I needed to also explore the Chilean side. A mysterious, blasted Moonraker lunar-scape, trucks and vans ploughing through the mud, old machinery everywhere, ‘orange is the new black’ Chilean modernist huts. This is the ‘Fuerza Area de Chile’ founded in 1969 with a sign proudly announcing ‘Poblacion: 75 habitants.’  Some groovy portable housing units in red lacquer, even a geodesic dome, sci-fi Modernism. Improbable to discover a lit sign for a bank, BCI Bancos, ‘Somos Diferentes’ and wondered if they’d originally installed it here just as advertising gimmick. Stumping up the bleak hill to the Catholic Chilean church (CCC again) which was rather disappointing, very ordinary compared to the other House of God on the opposite hill.

Indeed such was the lure of the One True Old Faith that I found myself heading back over there; learnt that the whole wooden structure had been transported for free on our own ship, the ‘Akademik Sergey Vavilov’ in 2004, whilst a wealthy patron had paid for all the wood, special hard timber in Siberia. The church had first been assembled there and each piece numbered, shipped here and rebuilt in situ. The grey of the wood so sombre against the solid grey of the sky.  I was very impressed Alexander-The-Great was quite so devout, lighting candles, kissing the Bible and showing me the ikons for St Nikolaus the Patron Saint of sailors. The doors to the altar were open now and I could see the banks of flickering candles, so truly wondrous all these ikons and gold everywhere, such richness by contrast to the world without. From the window a view to the grey sea and our boat, the first twinkling lights on the horizon, our floating home so silver lit at anchor. Imagine how even more amazing, spiritual, this could have been if only I too was ‘micro-dosing’ on LSD like many of our younger team, a truly beautiful idea out here. Lysergic Orthodoxy at the very end of the world, yea.