Dispatches from our Man at the Antarctic Biennale: installing art for the penguins

Tuesday 21st March: Brutal tannoy at seven; fog now lifted and we could see the blue Antarctic peninsular itself, HUGE mountain range, the scale is so surprising, the ‘sfumato’ of the whole thing, the ice and shrouded mist amongst the peaks. And on the other side Petermann Island named after the German geographer here in 1874.  No coffee for fear of peeing, bundling up in obligatory endless layers. Great excitement of our first humpback whales, the white side of their fins flipping at last moment, big spray of water from their spouts, definitely showing off for us, knew we were here, a pool of shimmery still water above them, then their emergence, the slowness and magnitude of their arc.

Out in the last Zodiac chugging over to Petermann, finally embarking onto Antarctic soil to see our first art works!  Strange colours, the muddy red not just penguin guano stained from krill but orange algae within the ice which gives impression of fields of flowers. We arrive amongst rocks with penguins all around us, they could not care less, waddling up next to us, craning their heads back to emit bizarre cry. Surely the most charming animal ever, like adorable toddlers except the PONG of their noxious guano, that odious stink is never mentioned. Lots of skeletons, one with both wings intact, as ‘Kas’ Kaspersky mutters “born in shit, die in shit.” Apparently they are social animals and commit suicide, will go where there is no food or shelter to die. Amazing to realise these penguins don’t know how famous they are thanks to Allen Lane, none of them have even heard of Penguin Books, been in a bookshop, totally unaware of their literary status, their worldwide reputation. 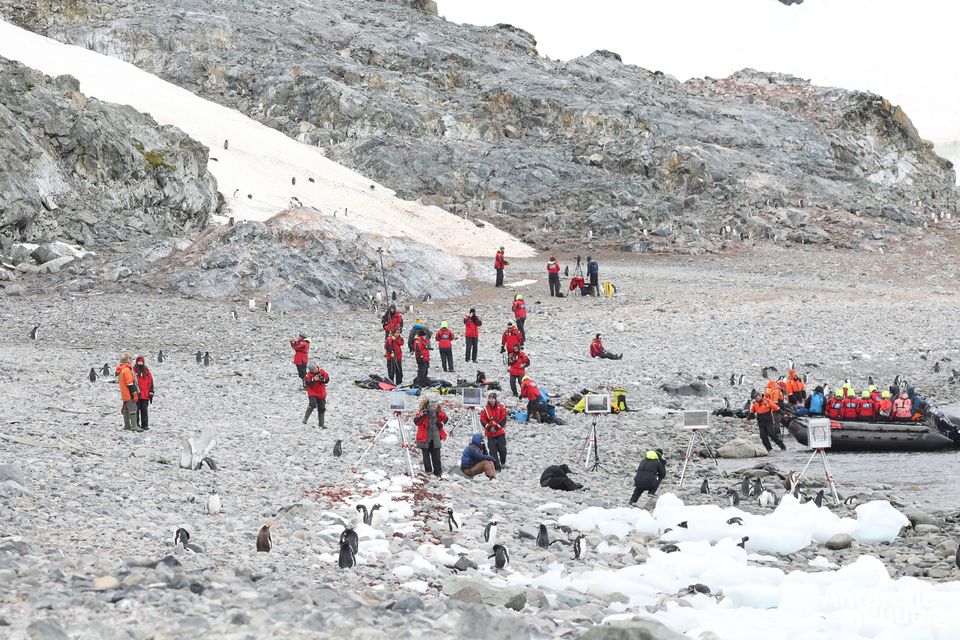 We arrive amongst rocks with penguins all around us, they could not care less, waddling up next to us, craning their heads back to emit bizarre cry

This island was inhabited by Jean-Baptiste Charcot, son of Freud’s famous teacher Charcot, the inventor of ‘female hysteria’, which somehow makes it all the more appropriate he named our landing ‘Port Circumcision.’ Charcot fils was an impeccable figure ‘the gentleman of the pole’ who named his boat ‘Pourquoi Pas?’ and was last seen as it sank opening the cage of his pet canary. Back in 1909 Charcot’s expedition spent winter here counting the penguin couples; there were 925 pairs of Adelies and 56 pairs Gentoos whilst at the last survey in 2009 there were 269 Adelies and more than 3,000 Gentoos. The stench of their guano pure ammonia, the reek that stays with you. A few seals on rocks, two battling, making faces and noises at each other, snarling, testing each other, combative young males.

Our first ‘Antarc-art’, the ‘Glaciators’ created by Argentine Joaquín Fargas, handmade robot vehicles clanking along the ice like Meccano toys to the amusement of a few Penguins. And then a great surprise; the strapping young Russian artist Andrey Kuzkin suddenly goes stark bollock naked, standing upside down with his head buried in the freezing earth, feet straight up in the air. He had dug himself a hole for his head, breathing through a snorkel, and remained like that for a long time, at least ten minutes, a strong, shocking vision in this blasted landscape. The series is called ’99 Landscapes with a Tree’, begun in 2010 partly in homage to his late father who created a lithograph of the same title. Kuzkin will perform ninety-nine times as this bare human tree all over the world and has already been arrested in front Big Ben. Indeed ‘Big Ben’ is the appropriate nickname for Kuzkin considering the impressive dimensions of his oeuvre in this freezing weather. Port Circumcision indeed ! Wild applause, penguins flapping their wings, when he finally comes down, body blue with cold but otherwise beaming, shaking hard from his daunting performance. A contrast with the very shy egg made of PVC brought all the way from China by Xhang Engli, nicknamed in turn ‘The Egg Man.’

Stumbling over to the Argentine naval refuge called ‘Groussac’ easily confused with Beistegui’s Groussay though rather different, an old corrugated iron shack in rusted colours. And on the outcrop a simple cross monument, an unreadable metal plaque, I wipe away the green rust to make out just one word ‘John.’ For the dead of the British Antarctic Survey, who tried to get here over the sea ice in 1982. Rumble of  distant ‘glacial indigestion’ from the Peninsular, the thousand shades of blue, grey skies intensifying the middle layer of azure, as if lit from within by some ultimate vodka advertising stylist. A big elephant seal by itself on beach,  looking round for others but all alone, very unusual for these parts hence the penguins confused and curious. They approach closer, he raises jaws and yawns and they scatter, then all come toddling back again. Exciting to step off from black rocks into Zodiac, surrounded by penguins, the spray from our Yamaha Fourstroke as we zip back to our Mothership.

At lunch Chad is outraged, someone on island was not only peeing but smoking, this does NOT happen with other expeditions, we are in big trouble. Everyone increasingly peeved by the artists, heard staff muttering amongst themselves “so much for all the lofty talk of utopias.” Pon-Pon insists again, “no pee-pee, no caca, no fucking” and later amusingly accuses me, “Adrian, it was you Mr Pee Pee!” I admit yes, “I poo, I pee, I fuck, I fuck a penguin, now have Welsh-Penguin child coming.” If anyone is seen showing such disrespect again we will be banned from going ashore. Forewarned we brace for afternoon at Russian station; the ladies can exchange their bra and panties for free homemade potato vodka from the scientists who have not seen any women in a year.

We wait on deck admiring the mountain ranges, very like Chamonix, one peak lost in clouds high as Mont Blanc; when the sea rises and only the highest mountains survive, with ice cold water lapping round them, this is how the Alps will look.

Disembarking, the artists always go first, because this in the ‘Ant-arctic’, the other end of the globe where everything reversed, in the real world artists are always last. Having to fight all the Russians trying to push past, “This isn’t Harrods Food Hall, back in line !” We zoom over to ‘Faraday Station’ as sold to the Ukrainians for a pound in 1956 and now ‘Vernadsky’ where we are welcomed by the wondrous ‘Boris’, like mystic saint with huge black beard and startling eyes, any fashion photographer would go crazy, wiry in sleek sportswear, Rasputin meets The Revenant. Wonderful kitsch place with picture of visiting celebs, Bill Gates and family, relics of dear distant Ukraine, the ‘Southernmost Souvenir Shop on Earth’ sadly without stamps until November and would take over a year for a card to arrive, hard to think of message, “I am leaving you” or “I am pregnant”. Ukrainian Orthodox shed with ikons, small but potent. Off on our ‘Zod’ to see the famous Bismarck with his fish-globe, but he had been banned from using the Coy carp he’d bought online and had delivered to Ushuaia. He is not allowed to introduce a ‘foreign’ fish into these waters even contained in its own bowl ! 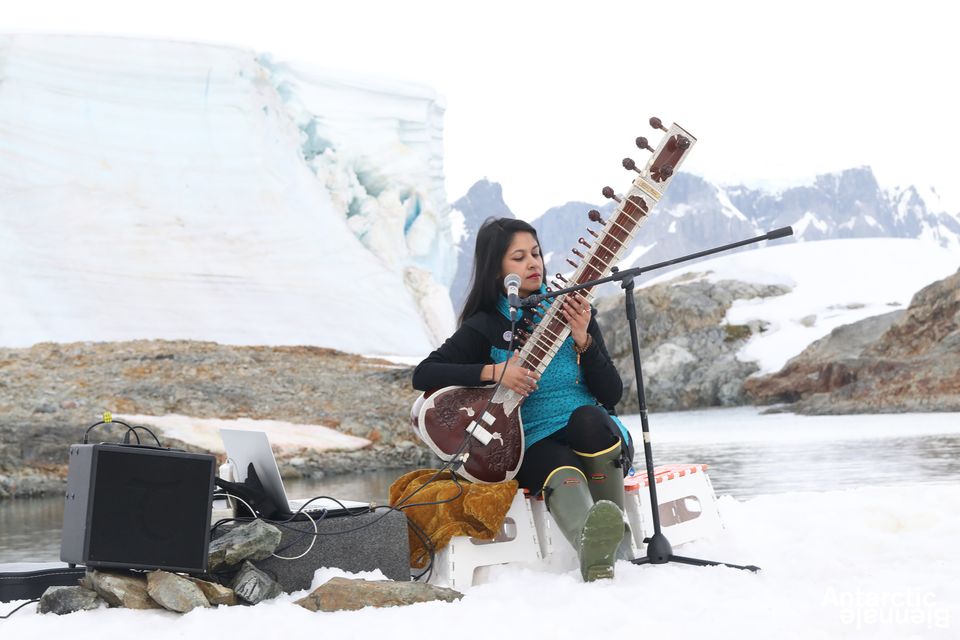 Speeding off again to Wordie House, a wonderful English post now run as historic site. Our tour company had brought down the entire Wordie family but due to ice could never actually visit, the reality of tourism down here. Out on the ice floe Shama with sitar singing her hit single ‘Ships in the Night’. Followed by Lou Sheppard from Canada, sporting a nifty bow tie, for the world premiere of her commission ‘Requiem for Antarctic Coastline’, scored to the chart of this same coastline we now stand upon. It looked as if the seals were playing with each other to the tune, one just lying there totally out of it, on back, flapping wings lazily. So funny the penguins swimming fast through sea, leaping, black and white flashes through the waves.

Very cold by time we were back on boat heading straight into the infamously tall and dramatic Lemaire Channel. It proved too ice blocked so we parked by the most astonishing iceberg with perfect circle in it, like Wagner set, Bridge of Sighs hand carved. And yet more whales, the fine high spray, sheer magnitude of those glossy black surfaces. Down for buffet dinner, we are eating so much, so unexpectedly delicious. Out on deck for projections by Anastasiou directly onto our iceberg. And then the stream of white light from the ship front, each iceberg like a star performer on the black sea, spotlit by the beam as we move forward into the freezing night. Went to top deck just to watch this hard white knife of light cleaving the zero black ocean before us. Asleep by 10.30, wiped out by whale wonder.