Dispatches from our Man at the Antarctic Biennale: learning how to leave no trace

Sunday 19th March: Woke to thick fog, magnificent sea aboil. Out on slippery green metal deck, weather dropping, air and water temperatures falling, we are approaching Antarctic waters, the coldest in the world. Lurched up to front ‘prow’ or ‘bow’ or whatever, so very ‘Titanic’ could almost hear Enya wailing away in the background. HUGE grey waves but don’t seem so nauseous when you actually see them smash against the boat. Breaking news that Chuck Berry died at 90, “No particular place to go”… the only information from the outside world we receive in two weeks.

At 10.30 mandatory briefing in dreaded ‘Presentation Vomit Room’ by Chad our charismatic leader; the fact Antarctica even exists is fantastic in itself and the sole reason it is as pristine due to rules — exactly same as twenty years ago. The special treaty created in 1959 and today 60 signatory countries all believe to preserve it, “for peace, science, and now art.”  So liberating that there are NO ‘sovereign states’ here, it belongs to nobody, we have been freed from all the curses of modernity; cash, credit cards, wifi, nationalism. Very rigorous bio-security protocols; “the most noxious smell on planet is Penguin poo, you will want to remove it. Taking anything including rocks, feathers, bones, earth only allowed by permit from your home government. Do not even write your name in the snow so nobody knows you have been there, do not smoke ashore.” I like it we are not allowed to do anything other than stroll around, suits my lazy nature. “The Antarctic environment is one of the most ‘mind-blowing’ on earth but also unpredictable, inhospitable and potentially dangerous, if you hear the horn blowing from ship please return”. Important; no rest stations — you have to be taken back to ship to use loo. No pissing at all on South Pole. “Tomorrow you will have Antarctica in your face — or maybe only thick fog. We are now in operation mode — every plan is only written in pencil.”

Enthralling talk on cyber-security by Eugene Kaspersky, billionaire sponsor of this whole Biennale, must have cost him at least a million, his striking resemblance to Philip Seymour Hoffman rather unnerving. Algorithms to recognise and detect other algorithms, ‘crawlers’ tearing through the internet, the Bangladesh Central Bank Heist, $81 million still missing but their second attempt failed because hackers spelt one letter wrong, “the most expensive typo in history.”  Cross-border ATM heists, test attacks on the Internet backbone in 2017, a German steel mill physically destroyed by cyber attack. ‘Kaspersky Lab — The Art of Cybersecurity’ have also sponsored rock concert in China and a female ski expedition to South Pole. “Russian is the most spoken language in cybercrime and Japanese the least.”

Our other participant presentations; the daunting young Dr Susmita Mohanty, worked for Boeing and now CEO of her own Earth2Orbit, launching rockets and her art-science residency in Delhi as well as Mad Lab Salon, an underwater dance experiment. Paul Rosero Contreras originally from Ecuador and already been to Antarctica, as everyone has, work based on research of Chilean neuroscientist, “Now you are listening to two different frozen lakes.” Interspecies collaboration,

yikes ! Shama Rahman, BBC actress, singer, ‘Interdisciplinary Storyteller’, academic-scientific expert on ‘creativity’ who has personally collaborated with everyone from Sun Ra to Sandie Shaw. Like her notion of ‘Anti-disciplinary’ possibilities.

Followed by group chat ‘The Antarctic Aperitivo Club’ on Utopia; forbidden spaces, whole issue of the sacred, as Nadim adds: “Not everyone should visit the Antarctic — but we should all become Antarctican.” We think of Antarctica as “space without cruelty” but in fact much murder and madness, stir-crazy cook went ballistic, someone cleaved a head in two with axe after losing chess game. In WWI, whales were killed here at highest numbers to make glycerine for bombs, an extreme anti-utopia.

Philosopher Alexander Sekatsky proposing photo show, uploading 15 images from everyone on ludicrous theme ‘Primary Inseparability’, maybe sounds better in Russian. Up to the bar and massive erotic action breaking out unexpectedly in every possible direction, not only younger elements hard amingle but even more mature females throwing themselves into the game, sudden new Sapphic detours, heterosexual comebacks, so random threesomes. In state of shock I stumble out into the clean night air and go instead to admire our beautiful searchlights in fog and sleet. To my surprise I am joined by the great Kaspersky as we look right over to the actual bow where waves break. 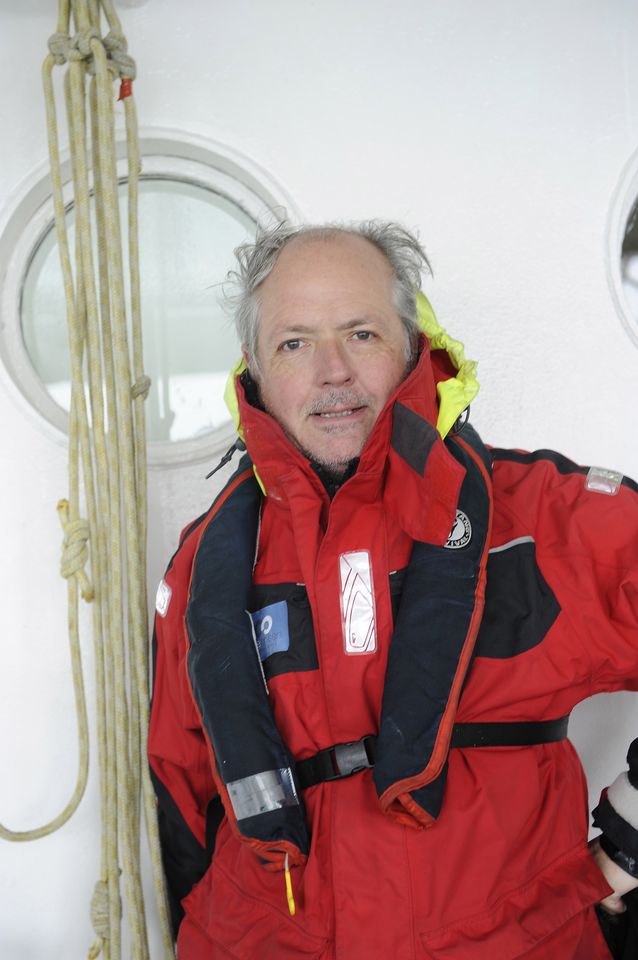 Adrian Dannatt, the man who never had phone and so can never be hacked

Told me of Chilean Patagonia, tiny huts in mountains where you arrive exhausted and they ask for your passport; he is developing digital DNA inscription so one can carry ID with one everywhere on phone. Revealed I have never owned a mobile phone, let alone smart thing, and he asked my age, like him 52, asked to take my portrait, “I need you for my next presentation — the man who never had phone and so can never be hacked!” Assured him I have a landline at home, bakelite. Photographed with wind whipping, spray breaking under the solid beams of three searchlights, fog dancing light paths. With his Chinese wife has three young children who speak Russian, two Chinese dialects, English, French, “we have a whole family of spies but cannot say which country they will spy for.” His offices in London are in Mission Impossible V with his own staff in the background. One bright white seagull lit in beam, “we are getting closer to land.” Totally dramatic as a movie, in spray and deep fog with Seymour Hoffman, a Surrealist spy story in churning Polar waters. Happy to crash to bed refreshed and drenched before midnight. Dread to imagine state of bar right now.