Dispatches from our Man at the Antarctic Biennale: setting sail

Our correspondent, Adrian Dannatt, shares his diary from the expedition to the White Continent

Up at 7 in first light of Buenos Aires, pounding hammer hangover from last night’s heady celebrations of the Yves Klein show at Proa Foundation, too much delicious Malbec with Klein’s fabled widow the artist Rotraut and her dazzling second husband Daniel Moquay, as vibrant and provocative as the late Yves lui-même. My forthcoming adventure stirred intrigue over the steaks—whole link made between Klein’s ‘Vide’ and the vast ‘vide’ of the Antarctic, not to mention blue monochrome ice.

My bag is small, a hot high summer morning but my fur-lined Shackletonian parka takes up all the room. Dropped by taxi at Aeroparque and the Plata blazing silver, last sun I will see for a long while. Long queue for our flight down south to Ushuaia, literally everyone going for Antarctic cruises on different ships, lots of retired Americans, a worryingly fit ancient couple from California next to me, nonagenarians in crampons and t-shirt, ‘Strike Fear or Get Struck’. By God they frighten me. Had no idea Antarctica such a big thing, everyone has either already been there or longing to visit, a lifelong fantasy for so many. Spot my first members of the Antarctic Biennale (AB) in front of me, an earnest young intellectual with impressive bouffant and round specs explaining 17th century homosexuality in highly modulated English. Packed Aerolíneas Argentinas jet and luckily wonderful seat 3F with window. The boy next to me from Sydney, a vet, and all his life had wanted to see Antarctica, his wife insisted for his fortieth, sponsored for charity somehow. It costs a fortune, hence these overtly wealthy wrinklies in spotless lycra.

A most astonishing descent into Ushuaia with the mountains covered in snow, small pools in the rocks so crystal clear one longed to swim, pure streams and nobody at all, no habitation, forest and huge sky and no sign human intervention. Like highest Scotland and fjords but so distant from all ordinary domestication, true wildness, emptiness, the sharpness of the air. ‘Del Fin Del Mondo’ literally the geo-temporal ‘end of world’ with melting ice.

Tiny airport with wooden alpine chalet beams and the AB (not BA) Russians waiting for us outside as we shyly meet the rest of our delegation; the academic I’d spotted in the queue turns out to be Carlo Rizzo, actually from Bari hence the too-perfect English pronunciation, running the Exhibition Road Commission whose first visiting artist had been Tomás Saraceno, also participating in our Biennale. From him I learn there are 9 ‘interdisciplinary’ participants, 14 journalists and 19 artists, though confusingly the artists who will be in Venice at ‘Antarctica Pavilion’ are not here and vice versa. Only person missing is the mysterious Pia Marocco, everyone asked “Are you Marocco?” and then a sign, ‘Marocco Is Missing.’

Outside was a ‘Tolkeyn Patagonia Tourism’ coach and they could surely have shot The Hobbit here. Our bus already abuzz with pan-international clever clogs, a Russian scientist-philosopher working in Oxford, Lisen Schultz a Stockholm based Biosphere expert and cellist, Dehlia Hannah living in Copenhagen whilst teaching at Arizona Sate, typical of the amazing span of all these multi-dimensional lives, nobody in the same country where they were born, all speaking at least three languages. 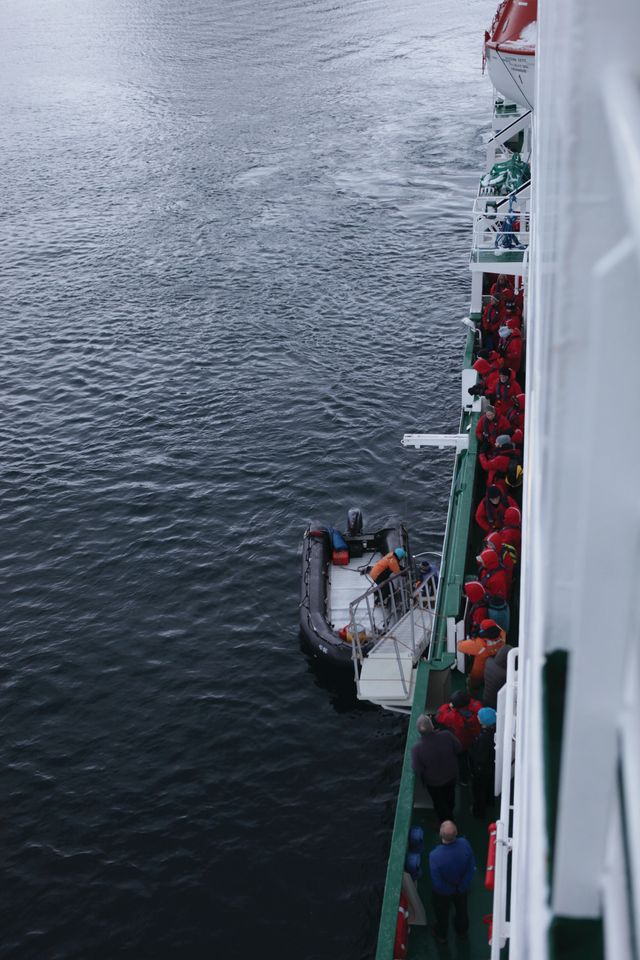 Winding bus into Ushuaia, bright coloured houses like San Francisco but basically corrugated iron huts. Spied anti-British slogans with map of the Malvinas, hold on, the Falklands, as if centre of world. As we drove through the main gates of the dock an astonishing big sign, ‘Prohibido El Amarre De Los Buques Piratas Ingleses.’ Luckily I am Welsh, like many here in Patagonia, indeed descendent of a Welsh rather than English pirate, Howell Davies, my grandfather of that same name having been an expert on just this part of the world, editor of The South American Handbook for over forty years, making me practically a local.  Finally we arrive at our splendid Russian ship, the ‘Akademik Sergey Vavilov’ built 1988 in Finland, owned by Russian Oceanographic Research Institute and so elegant and old fashioned in contrast to the gigantic ‘Norwegian Sun’ monster next to us, sworn enemy of Venice.

Our ship is every inch a proper one, straight out of Hergé, white with green decks, and likewise something pleasingly nautical about the penciled chalk number on my bag, 434, a very good one, my cabin. Up the gangplank to encounter for the first time the splendid beard and wild white hair of our spiritual leader Alexander Ponomarev, creator of this splendid crazy adventure. Hard not to call him ‘Captain’ or ‘Commander’, this veteran sea dog who is not only a professional submariner, career officer in the Russian navy, but also skilled daily draughtsman and true ‘conceptualist’, a man of the world who lives only for poetry, salty twinkle.

Very happy with my cabin and especially charming Miguel Molina from Lavanguardia in Barcelona—what a great name for a paper—media sponsors of this event along with the Art Newspaper. Like me Miguel spent much of his youth in Otto Zutz and all the ‘Movida' clubs and with extreme generosity lets me have the whole back room with double bed, making ‘434’ my daily haven. Joined by his friend who is a ‘Producer’ of the AB, Tatiana Kourochkina, a blonde Russian beauty living in Barcelona where she maintains the mysterious Quo Artis Art & Science Foundation. I seem to be the only person on board without a Phd or my own foundation. Went out on back deck to admire the view of Ushuaia ringed by mountains and soon achat with feisty ‘Space Architect’ Barbara Imhof from Vienna, who is keen to pack us all off to Mars. Our typical language here, “analog site” and “I’m narrating this as Research Curator.” Joined by the delightful Jean de Pomereu who came looking for me as typical Englishman. An absolute Antarctic expert, the ‘polar’ opposite of myself, who lives in an Normandy farmhouse but spends most time at South Pole. “There is no connection between where I live and where I do most of my work.” His father the doubtless impeccable feu Marquis Robert de Pomereu was also an explorer and adventurer, but of the spiritual rather than geographic, a ‘seeker’ with both Gurdjieff and Krishnamurti. Jean explained, as an old hand and veteran of countless trips that we are actually going to the most accessible part of Antarctica, the easy option, but this Peninsular is also richest in wildlife, there were huskies being used here until banned in 80s and old-school explorers outraged. 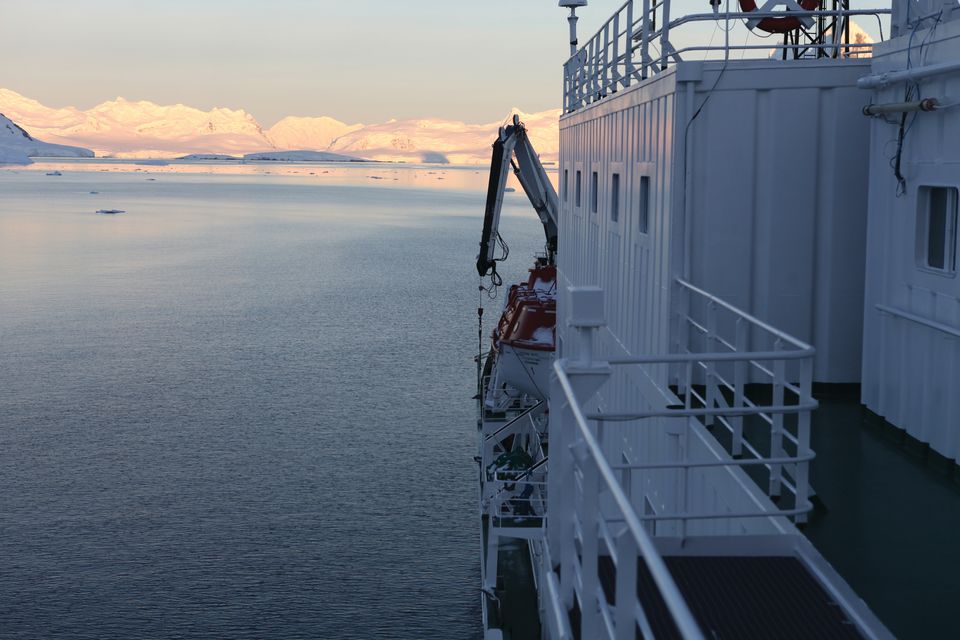 Views from the Antarctic Biennale

This is not an actual ‘icebreaker’, rather disappointing, but ‘ice strengthened vessel.’ He is currently publishing new exceptional quality platinum prints of the classic early photographs of the Antarctic and showed me framed examples in the library, including Captain Oates. “ I may be some time…” soon becomes the standard line onboard for anyone going outside. Flatteringly he is convinced I resemble Scott or rather John Mills playing him, perhaps less flattering. Drinks reception with splendid freeform speech by Alexander-the-Great, or Pon-Pon, how we are all about to enter the magical dimension, the last empty space of the imagination for mankind, “beautiful woman” his favourite whispered line. Mysterious officers in khaki uniforms joined us for evening, maybe Governor of Tierra del Fuego, Naval top brass possibly, nobody knew.

I spoke muchly with an extraordinarily HUGE Texan in ten gallon hat who turned out to be “our American President”, John Blaffer Royall, a Newport grandee who hosted a lavish party there for the Biennale. A true Blaffer philanthropist, including the eponymous Houston art space, a fan of Matthew Ritchie and had got him “on board” literally, but he couldn’t make it in end. Only in mid-40s he is seemingly connected to every grand family in US, largest oil family in Texas, Exxon and Texaco, and also related to Owen who created the utopian New Harmony in Southern Indiana. Still some 800 residents and his cousin Eric Ovenberg arriving from there tomorrow, more than 40 hour flight. Also another cousin, Yalie Abigail, brilliant 27 year old entrepreneur. He had got the mysterious ‘Marocco’, apparently a major fixer, to organise special kitchen supper for the Biennale in London with Charles Saatchi and other heavy hitters. Royall just one of these astonishing people and their stories from all over world. The artist Sho Hasegawa living in Hamburg and planing to skate on the ice here, who was selected from the open call for artists under 35. The same age as our co-curator, boyish Nadim Samman, a veritable Tintin with his youthful quiff, who has a typical background for the biennale, born in Britain and growing up in Hong Kong with Australian-Lebanese parents, now based in Berlin. Pleasingly his first ever job in the art world was with TAN. Dinner with lashings of free red wine, hurrah, late arrival of Yasmin Alexandra Nystn, a young Lebanese painter in Long Island City who, of course, is also Finnish, yet another exotic mélange. We were briefly graced at dinner by the great Saraceno himself, who sadly had to cancel his trip with us to prepare museum show back in Buenos Aires. Likewise Lara Favaretto of Italy also had to bow out in the end. 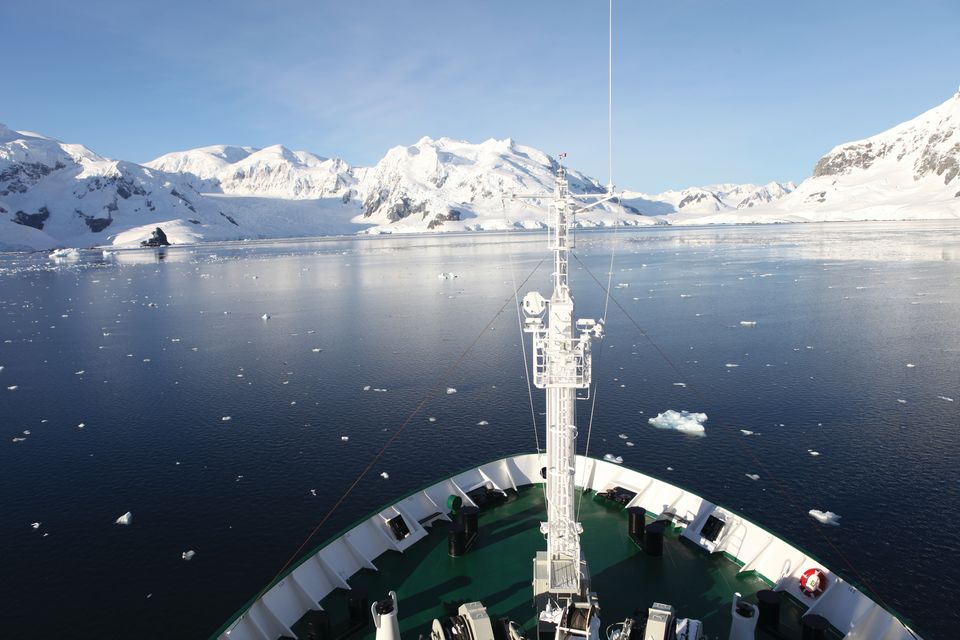 View from the dock

Stood outside on dock with glass of Malbec admiring the wild projections on side of the boat from the Brazilian Alexis Anastasiou and walked to end of the pier in dark for a solitary romantic pee. Astonishing to be here. More rosso guggling at the bar on 6th floor and views of distant snow capped mountains, this vista in itself enough. The fabled young Shama Rahman, who will be sonically-tracking the ‘White Continent’, treats us to an impromptu set on her giant sitar, not only a musician but a Phd in neuroscience like every other hybrid genius here. Listening to late night Bengali music in Ushuaia deep harbour. Happy to get to my wide bed by 11.30 exhausted from early rising and strong sea air. And the people, my dear, the people!