Dispatches from our Man at the Antarctic Biennale: Ushuaia with Yto Barrada

Tinny tannoy ‘rise-and-shine’ breaks the day. Goddam 7.30 unlike my usual leisurely 11am, wearily tugged on my bombachas to breakfast in the large dining room, hub of our world, delicious big sausages and potatoes, greasy Soviet delight. Mystery of the very large Russian crew, over 40 of them, we hardly see as opposed to the ‘One Ocean’ cruise team entirely Canadian and relentlessly nice in that Canadian way, shiny and efficient, buoyantly upbeat, so clean. To my delight out on deck actual sketching already being done by the intense Abdullah Al Saadi from UAE. He hardly ever speaks but the richness of his spirit is overt and love the idea of his diaries drawn on canvas and stored in metal archival boxes. Excited to meet the one other soi-disant ‘Arab’ artist Yto Barrada in her workman’s bleus photographing her daughter’s stuffed tiger on the ship railings to send back to her in Brooklyn. Always been a real devotee of her work indeed for me, she’s the big ‘star’ on board, not that one should think in such vulgar terms. 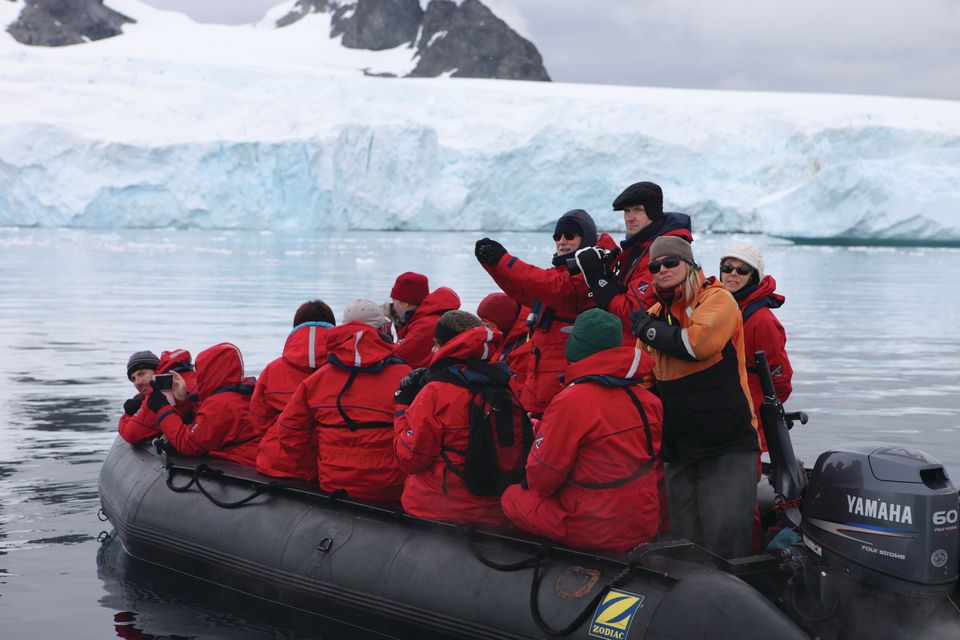 Walk into Ushuaia with Yto and she amusingly snaps me holding up my British passport in front of the infamous sign denouncing ‘English Pirates’ complete with Union Jack with cross over it. Two armed guards staring at me, time to move on. Yto already hard at work gathering plants everywhere, chatting so easily to the workmen cutting down weeds asking if she can have some, will be setting up a laboratory-studio on the ship to turn all this local wildlife into dyes for her handmade textiles. She knows the name of every style of local vegetation, her sharp eye misses nothing, stems and leaves she will alchemically transform into a sort of living record of the voyage. Nothing, appropriately, in the End of the World Museum. The garden next door has prison transportation carts and a rusty old cannon.

We bump into Julian Charrière, the young French-Swiss artist with a striking resemblance to Gérard Depardieu at same age, say Les Valseuses, and show him the cannon; he had just created his own, at great expense, back in his Berlin studio to bring here and fire coconuts from the Bikini Atoll into the Antarctic. Clearly a splendid notion but spoilsport German police confiscated it as a weapon. Yes ! We have no coconuts...

So sweet the many Catholic schoolgirls in pleated tartan skirts, strange to imagine actually growing up here, the absolute end-point of the world. At lunch in a corner café Yto cleverly goes to my MacBook ‘Settings’ and shows me how to post email to tell everyone I am now away in the Antarctic with no contact for the next ten days. To be so long without any wi-fi as big an adventure, challenge, as anything, more transformative than the voyage itself. Yto has so many surprising sides, despite being thought of as a suitably ‘conceptual’ contemporary artist back in Tangiers she lives in one of the old houses of James McBey and turns out to be a genuine fan of that great Scottish painter, also knows legendary ‘Chrissie’ Gibbs who gives her a McBey work for every birthday.

At dockside checkpoint showed my dangerous British passport, nervously, and back to the boat for our departure. Announcement: “We are heading straight into a bad storm, which is typical for Drake’s Passage—please do not leave any objects on shelves or they will fly straight off.” Looming darker clouds and ‘ringed by the flat horizon’ the distant low fading light of day. We all gather at the bar on Deck 6 for “farewell toast to the known world” and safety briefing. Dial 666, very Crowley, and always an officer on watch. We are assured that “the boat will rock and roll” and given the mantra, splendid phrase, “always keep one hand for the ship.” And important point that this is a working ship. The most unique journey possibly on the whole earth, as our splendid cruise leader Chad says, we are here “to show the world what our passions are.” Chad, also known as ‘Fez’ and himself an artist, is our rock, our bearded lodestone. 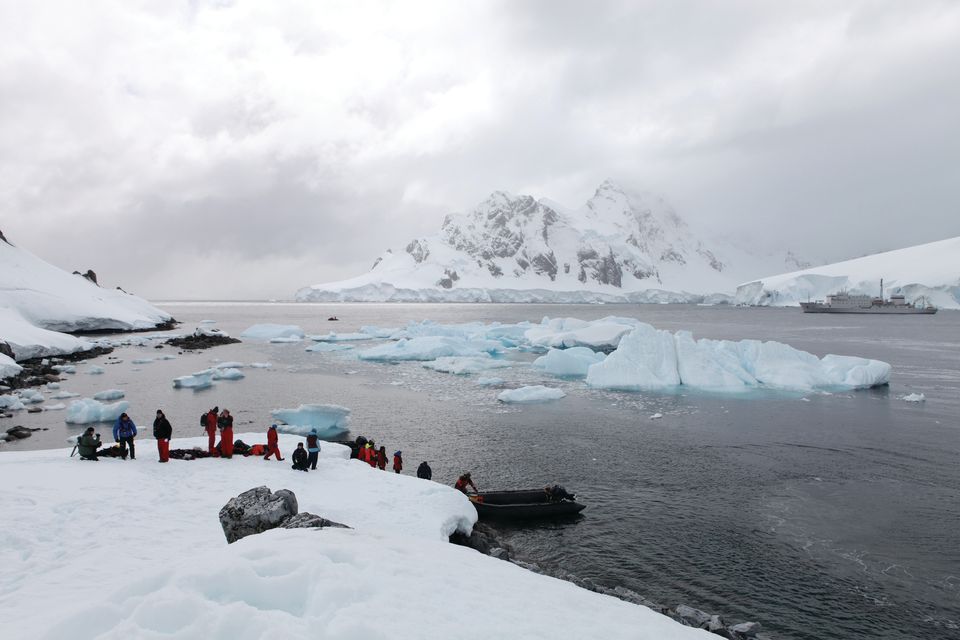 Wonderful leaving with the booming ECHO ECHO of our loud funnel blasts bouncing back from the distant snow-topped mountains. The surely famous black dog of the quay racing up and down, barking at the thick ropes as they are thrown over into the churning water, everyone here knows this animal and loves it, bounding around with such energy.

The slow departure at 6.15, waving at the other boat as it pulls out next to us, amazing quite so many of us leaving at the same time. Like the sheer numbers now climbing Everest, what seems special and unique has become absolutely standard, everyone has been everywhere, even the very rarest destinations are thus debased.

We salute Captain Oates, today was his birthday, and he went out bravely into his personal blizzard the day before. Jean, as soft spoken as he is encyclopaedic in his knowledge of Antarctica, explains Oates was wealthy and paid for his own journey. The strange sensation of when we first enter swell, very ‘up and down’ indeed. Annoying that the bell rings for lifeboat drill just when we would rather be looking at the long fjords as we pull out, getting our lifejackets from a cupboard in the cabin and going inside the sealed lifeboat itself, like an interior of an Atelier van Lieshout structure. Very cramped and presumably we would all have to reproduce amongst ourselves, “I don’t want to die a virgin” my running joke.

During the dinner—no free wine so stuck to healthy water—went outside to see the final sunset, the distant shore and one last remote station lit on the edge of the black water. Impressive, impassioned and poetic speech by Nadim, we are not going to the unknown but rather to the centre, to try and think differently about all our ‘geography’ in widest sense. There are over 30,000 tourists a year and 4,000 on stations, nearly a thousand on just the US base. Steak and excellent company as always on either side, like a dinner party with the most exotic and diverse guests but careful with your ‘placement’ as Russians like to speak among themselves.

Very sweet on-board medico who lives in Clacton-on-Sea with amazing stories. On her last world cruise there were four deaths in as many months, a 60-year-old husband hung himself on the back of his cabin door when his wife started a romance with the professional gigolo ballroom dancer—the body taken off board and the dancer thrown off, whilst his wife happily stayed on albeit as a social pariah. A man on the Amazon trip had to be persuaded not to jump, he’d been depressed and hoped the cruise would cheer him up but became even more despairing as everyone was in couples. A poor girl in her twenties whose boyfriend was having affair, she leapt off the coast of Iceland, they turned back but impossible. Despite all this our surprisingly cheery medico goes straight from here back to working in Jaywick, Britain’s most notoriously destitute community, an extreme difference. Rizzo reveals there was even exhibition at his V&A on Jaywick, everyone seems to know it.

Up to the sixth-floor bar and the usual high-level badinage; how the Faena Foundation is passionate about ocean rising, we are here outside all boundaries—like outer-space seekers. Many old-sea shanties on the guitar with Alexander-The-Great, ‘Pon-Pon’, strumming and singing lustily. “Moscow is the best city in the world—because you can buy a TV set at two in morning.” This is explained to me by the architect Alexey Kozyr with a wild look, fantastic long grey hair. He wore the first ever Doc Marten boots in Moscow in 1991. I told him he should have imported them as an entrepreneurial business, I will take my usual 200%. The architect pleas, “I need the starting money” but more important the ‘finishing’ money. “And what about the in-between money?” 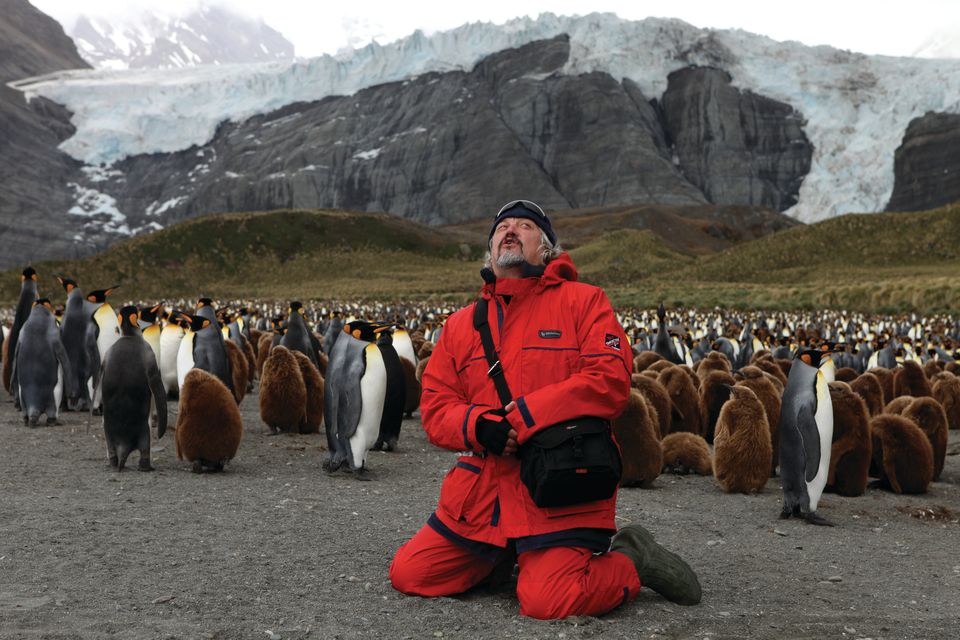 The Angolan film director Miguel Petchovsky was in Lisbon during the revolution, a hardline Trotskyist but did not know the fabled radical graphic designer Robin Fior. He accuses me of being “elegant” for wearing a “Victorian blue” velvet jacket. Pon-Pon tells me how he met one of the chief British Admirals from the Falklands war, or is it Malvinas, whose son runs HMS Belfast in London. At the same event he was totally excited to meet a survivor of the Murmansk convoy, the first book he read as a boy about the sea which so inspired him. The sheer pleasure of being out on the top deck watching the dark ocean slide by either side, holding on against the ever-increasing sway.

Denis Delestrac, the French documentary director living in Barcelona who is here shooting the official film on our voyage warns me to stand well away from the rotating radar as apparently it's radioactive. This led to much jesting with Alexis, the ‘Brazilian projectionist' that I am surely about to be turned into a glass of milk and slowly into cheese—I need tinfoil on my head, we should all wear tinfoil crowns aboard. I aim for 11, lights-out, and no alcohol luckily as hangover tomorrow would be added horror. Just how savage shall tomorrow be?