Dispatches from our Man at the Antarctic Biennale: Welcome to the Continent

Friday 24th March: Woke extremely refreshed with icebergs drifting past through porthole; up on deck at 7.30 and spied very elegant black wooden house on end point of ice, chic as Cape Cod. Made me realise how much I missed buildings, how I love them, more so than just this endless flotilla of ice covered mountains. Chad told me it’s a well-known Chilean base, could see our dawn sun breaking past the highest sharp peaks, radiant light emerging. “It’s all good stuff” he added.

Breakfast with loud tropical paradise birds singing through the speakers, actually rather annoying, like real jungle, part of Paul Rosero Contreras project and his special Ecuadorian Antarctica raw organic chocolate bars laid out for everyone. My first proper chat with young Bismarck so I mentioned his notorious namesake one used to meet in New York, pink faced and outrageous, balding maybe even a schmiss, who died, one did large amounts of cocaine with him on occasion. “Ach ja, ze Ping and Pong brothers!” Good breakfast joke from Pia Marocco, “men are either hungry or horny, so if you see him with a hard-on make him a sandwich.”

Off to the Argentine station and as we arrive in our Zod, “Welcome for the first time to the Antarctic Continent itself”, stepping onto the actual peninsular. The ‘Eastcaion Cientifica Almirante Brown’ created in 1953 with the name BROWN in bold. Wonderful old rusted orange colours and the blue-white national flag painted on the corrugated roof, they had left a few weeks ago so everything bolted shut. A pole with distances in ‘millas nauticas’—Ushuaia 620, Buenos Aires 1,826 and New York 5,345—all the places I had just come through. This station, infamously, was destroyed by a conscripted Argentine army doctor, who after his eight months was told by the relief-boat that there was no replacement, he would have to stay an extra term. He set fire to the buildings so the boat would be obliged to turn back and take him but they never saw the flames, kept sailing, The place burnt to the ground and all the crew had to survive until the next year in improvised tents. If he had not been the only doctor he would certainly have been murdered. Surely a great movie? 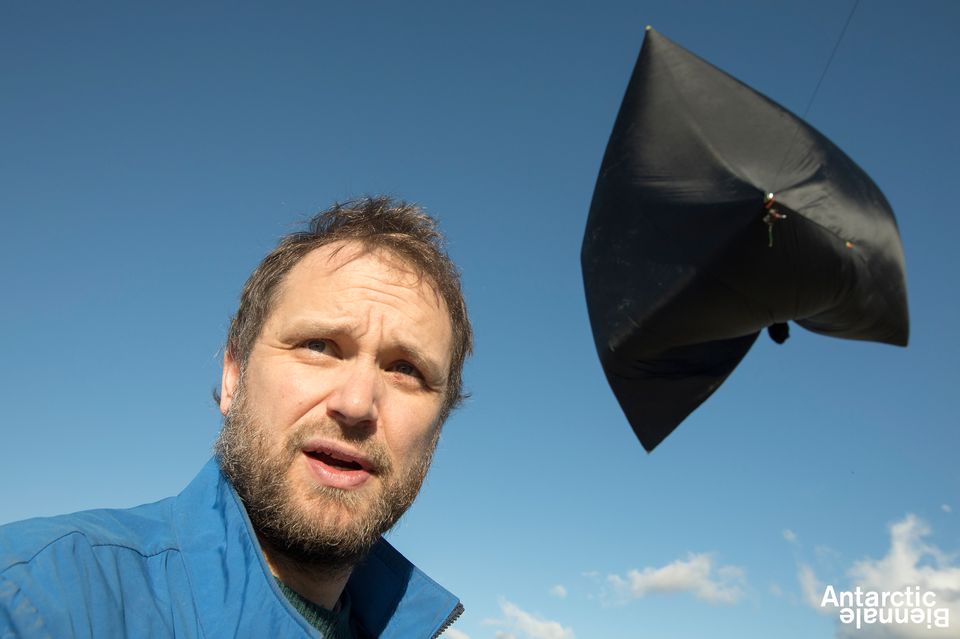 Tomás Saraceno's ‘Aerocene’ black cubes lifting up thanks to the bright sun, tethered like kites and quite wonderful

Penguins moulting disgusting everywhere, reek of the old poo, we never get to smell their stink and filth in the cute photos of them. Up onto our first proper snow, crunching underfoot, a marvellous high plateau and view down onto lake crystal clear the other side, huge ranges sunlit behind us. The Tomás Saraceno ‘Aerocene’ black cubes lifting up thanks to the bright sun, tethered like kites and quite wonderful, their angular geometric shapes against the sharpness of equally back rocks and the white snow, like a 3D geometric abstraction in the sky quite aside from all its scientific-conceptual raison d’être, just looked so good here. The sweet skater Sho Hasegawa trying his best and coming crashing down the steep far too icy hill, frightening to watch, smiling politely in defeat. Rosero Contreras with his cocoa plant in special scientific jar brought all the way with him, like his breakfast birdsong.

‘Big Ben’ Kuzkin had photographed me at top of the highest slope, where crossed ski sticks and a pink ribbon mark the end of our zone we can walk, I had been flattered then realised was just to judge the most photogenic spot for his next performance. And lo and behold there he was up-in-the-air again with credentials all on display. Everyone could see him, waggling his buttocks in the air to get his feet up, but less and less people taking photographs, hardly anyone even paying attention,“Oh, just another naked upside-down Russian Performance Artist”. Just as we no longer photograph the whales, seen it all too many times before. By contrast, Yto Barrada laid out her beautiful coloured linens on the rocks, like at some souk, with jars of her homemade locally-sourced pigments from the boat and from the surrounding nature. And I noticed a mysterious woman never seen before, it still happens, the boat seemingly has many secret passengers, actually making watercolours. She turned out to be Katya Kovaleva, a Russian artist who lives in a beautiful dacha outside Moscow designed by Alexey Kozyr, our on-boat architect; a pleasure to see someone licking their brushes and dipping-their-wick as it were.

Hungry at lunch, as ever delicious plentitude, chicken and rice. Up on front of prow as we sailed across Paradise Bay to a final curved nook sheltering a small, smooth-domed island. This is Leith Cove or Dutch’s Dome (named after a guide  ‘Dutch’ who camps there) and exactly how I always imagined the Antarctic landscape; sunny, Alpine, bright white, picture postcard clean and quiet. One of our best expeditions, with Alexander-the-Great doing his drawings in notebook whilst reclining regally in the snow and Sho-the-skater giving it another go. On the top rock a red & yellow corrugated iron tower, splendid in itself, very much like an English 1950s Constructivist sculpture, and with the first graffiti I’d seen in Antarctica, what looked like ‘PITA BBQ’ in red paint.

Most pleasing of all was Julian Charièrre’s idea of us all observing thirty minutes silence with no damn photography, “A happening where nothing happening” as he called it. As Nadim said proudly of his young protégée, “he has the grace to insist it is not a work of art.” Wonderful the silence here, other than distant sound of the engine on our boat in bay and then tannoy announcement ringing out in Russian. But most impressive of all the huge BOOM of avalanches from the blue mountains so high all round us, a deep roar across Paradise Bay, and the surprisingly large waves hitting the shore, the reverberation going through the ground then the sea, shock waves, literally.

This afternoon it had been a week since we set sail, last Friday at six. Splendid idea of a full-scale lavish BBQ outside on the back deck, but so cold. Beautiful to see one lit ship in the distance, the first we had seen since Ushuaia, romantic on the horizon dark. More special projections on the icebergs including, thanks to the ship’s own celebrated TV news anchor Ekaterina Gracheva, images of her handsome late father, a James Dean lookalike who had been on the original Soviet Antarctic expedition.

Up in the library and joined by whole team of Ruskies to watch even more shocking performance videos by our favourite ‘Big Ben’ Kuzkin, including cutting words across himself with a bloody razor blade. Out of the front window the bright white beam straight onto icebergs ahead as if skiing, slaloming, through the floating chunks. A wonderful vision, like early cinema, of snow-sleet blowing so hard into the light as we plow forward into the freezing night. Quick to bed, oh the rocking dark, curtains open to the sleet driving solidly past my porthole, whistling as it goes so. Lights out for 10PM as brutal early waking tomorrow dawn.