Eddie Peake was enjoying a final moment of free-form freedom at the private view of his White Cube Bermondsey exhibition in London, last night, surrounded by a throng of friends, family and admirers—including fellow artists Prem Sahib, Tracey Emin, his mother Phyllida Barlow and father Fabian Peake. For as of tomorrow (8 February) the artist will be back in the gallery assuming a performative persona (the show opened on 7 February but the main man was off sick with flu) for his exhibition Concrete Pitch (until 8 April). He will remain in this mode for the entire run of the show, which he describes as “a nine-week performance”.

Recently Peake has tended to orchestrate his live works rather than directly perform in them, although he is often in evidence behind the decks creating the sound element. Now, even though he is taking centre stage, he stresses that it will be a comparatively low-key affair based on “quotidian routine” and “banal activity”. He sees himself as just one amongst many exhibits in a characteristically action-packed and cacophonous environment of paintings, sculpture, projections and architectural structures, as well as a radio studio broadcasting Kool London’s live radio show. 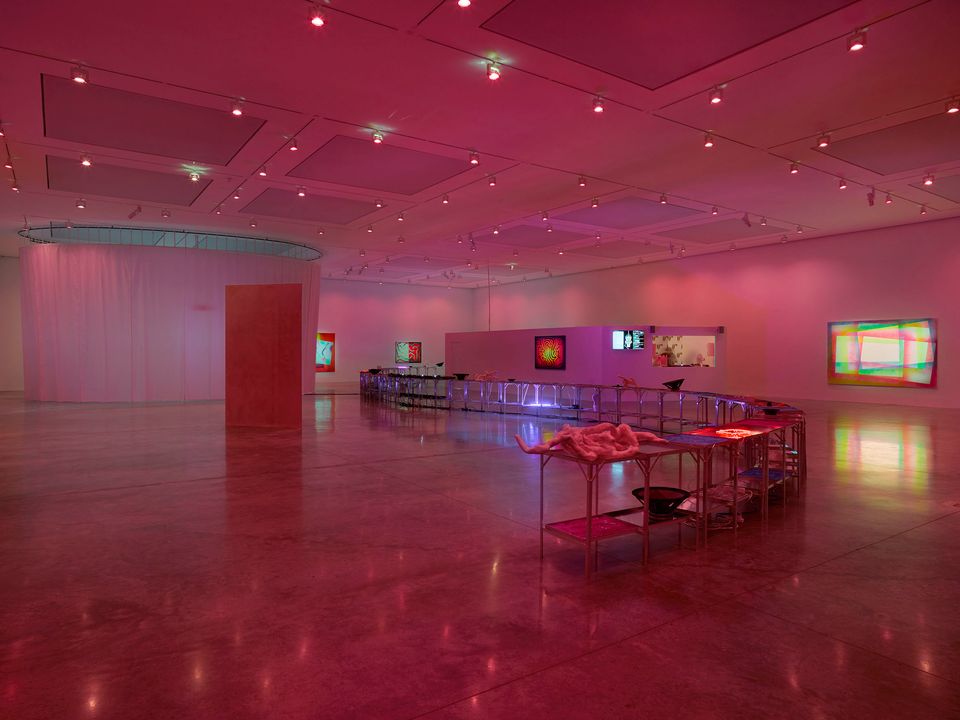 Come at certain points and you can observe the artist sitting at a desk doing his emails in a specially constructed dwelling space—its glass windows a two-way mirror so he can’t see out—or lying on a couch which he has dragged into the gallery space. Or he might be interacting with elements of his new sculpture Stroud Green Road. This is named after the high street that runs through Peake’s childhood neighbourhood and consists of a line of clinical-looking steel tables carrying such evocative objects as packs of Chewit sweets and vats of pink and blue hair gel. There’s also an array of sound equipment that makes the sculpture reverberate with mixed, distorted recordings from this part of London.

But however informal and ordinary his activities, Peake won’t be chatting to visitors. (The fact he’ll be wearing an all-in-one white suit adorned with a row of clownish pom-poms wryly signals his performative mode). The show may be bathed in rosy pink light and permeated with highly personal references—the title Concrete Pitch alludes to a playground used by all the communities in his former stomping ground of Finsbury Park—but it is more than an exercise in nostalgia. Peake also aims to address our harsh political climate and, in the words of one of his text paintings, “a more uncomfortable and realistic history”. It is in this context that he decided that, rather than arranging and choreographing the bodies of others, it was more appropriate to put his own though its daily, repetitive paces.