Fashion and art have had a somewhat iffy relationship of late. Jeff Koons’s handbags printed with works by the likes of Van Gogh, Titian and Fragonard caused art world lips to curl pretty much in unison, with a more mixed reaction to Victoria Beckham’s collaboration with Sotheby’s last year to show old masters—and also some old mistresses—in her Dover Street store.

However, there was a hefty endorsement from the London art world at last night’s packed launch of Casa Loewe on New Bond Street. Tate Britain's director Alex Farquharson, the National Portrait Gallery's director Nicholas Cullinan and the Camden Arts Centre's director Martin Clark along with gallerists Sadie Coles, Thomas Dane and Jake Miller all gathered to salute the fashion house’s new flagship emporium which bears testament to creative director Jonathan Anderson’s love of art by featuring works both historical and contemporary by 14 artists and makers from the Loewe collection alongside the garments and accessories for sale. 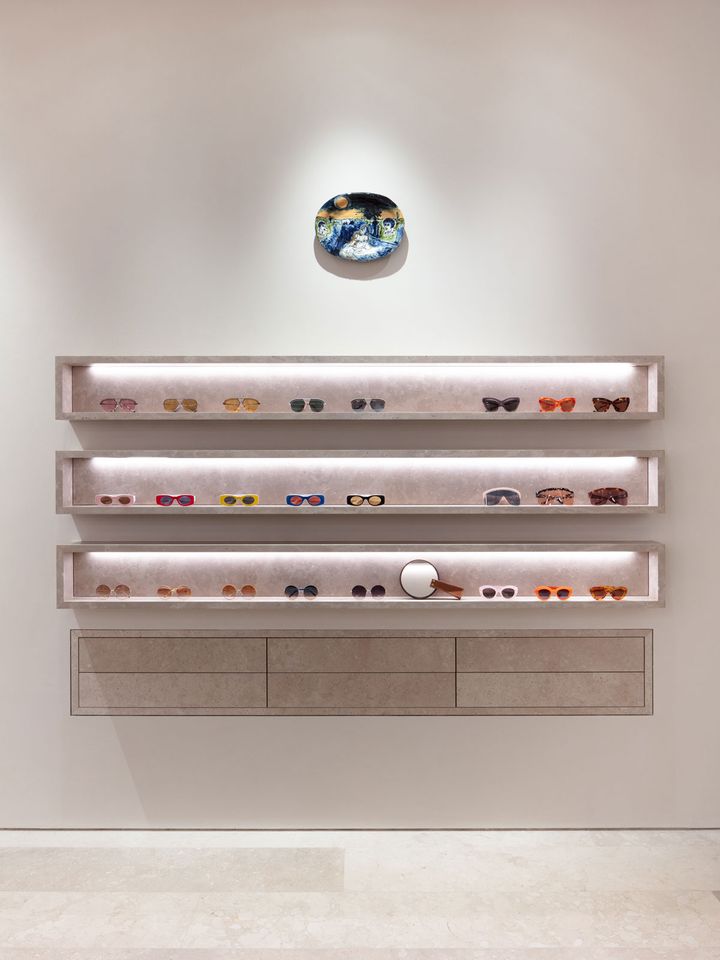 The intention is to evoke the imagined home of a (very fashion conscious) female collector, with notable exhibits including a six-panel work by the veteran Italian painter Giorgio Griffa, which runs along the back wall of the ground floor. Its hot pinks, ultramarine blues and verdant greens are picked up in the adjacent rows of handbags, with more recent paintings by Caragh Thuring, Justin Fitzpatrick, Alvaro Barrington as well as a sculpture by Magali Reus also playing with and off the merchandise. An early Grayson Perry plate hangs above shelves of sunglasses while Daniel Sisnel’s concrete and hand-blown sculpture of a pair of spectacles sits amongst a procession of artfully arranged Loewe footwear. Holding court on the first floor is Anthea Hamilton’s fabulously show-stopping vaa-vaa-voom Vulcano Table; its steel structure engulfed in a welter of globular scarlet blown glass teardrops. Hamilton is an established Loewe collaborator with all the costumes worn by her disquieting squash-headed performers for her 2018 Turbine Hall project designed by the luxury brand. Casa Loewe also contains some significant historical works such the totemic 1956 bronze Idol 4 by William Turnbull, a version of which is currently on show at Tate Britain, a series of 1960’s photographs by the veteran Brazilian photographer Alair Gomes and a chandelier designed by Sir Edwin Lutyens in the 1930s. Anderson hopes that this eclectic array will mitigate what he has condemned as the “passive aggressive” atmosphere of many high-end fashion stores and introduce a more benign and welcoming atmosphere. Certainly last night’s blend of fashion and art seemed to attract some intriguing encounters with Serpentine's chief executive officer Yana Peel chatting to the actress Jodie Comer who plays the Russian Assassin in Killing Eve and, along with Sadie Coles, having animated conversations with hip-hop heavyweight and fashion afficiondo A$AP Rocky, who was swathed in Loewe for the event. Who knows, maybe the American musician might be back in a few months to perform for the art crowd at the next Serpentine gala?