Plus, Eric Doeringer pranks the Broads and Serpentine Galleries embraces the golf cart 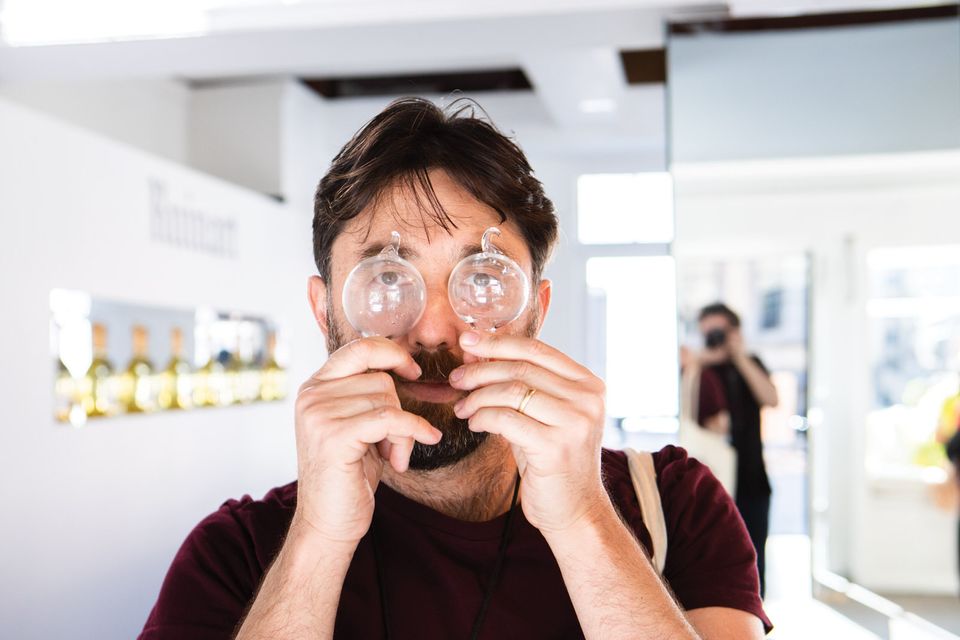 David Horvitz gives a message in a bottle

According to the American Lung Association, Los Angeles is the smoggiest city in the US. And lucky visitors to the backlot at Frieze Los Angeles will be able to take some of this award-winning air home. Glass ampoules blown in Los Angeles will be given out as part of a performance, Air de LA, by the Los Angeles-based artist David Horvitz. The work takes its inspiration from Marcel’s Duchamp’s 50 cc of Paris Air (1919), which was a glass ampoule that the French artist bought in Paris and gave to his US patrons Walter and Louise Arensberg. (The piece, now in the collection of the Philadelphia Museum of Art, got broken in 1949, with the Parisian air escaping and never fully recaptured). Horvtiz’s ampoules also contain ash from the recent Malibu wild fires, highlighting the increasingly poor air conditions that befall the city during a blaze. To get a chance of getting one of the 250 glass orbs, you’ll have to head to the Ruinart art bar and utter a secret password. As we went to print, the organisers would not reveal how visitors can obtain the password, so take a deep breath and pluck one from the (smoggy) air. 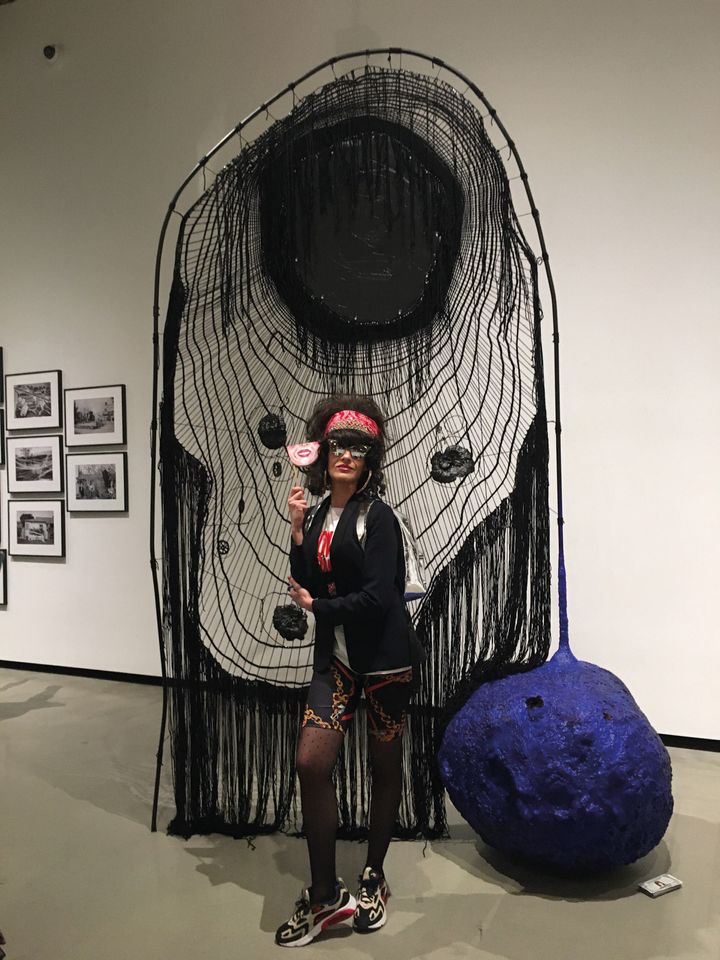 Jeffrey Deitch’s Hollywood gallery has never looked so crowded and crazy as it was at last Saturday night’s opening of All of Them Witches, curated by Dan Nadel and Laurie Simmons. They chose 170 works by 78 artists (mainly women) who share a “witchy” sensibility and use occult or supernatural imagery “to channel ideas about power, the body and gender”. “It was really a mood that we were after—we used words like adolescent, sexy, mystical,” said Simmons in a blood-red pant suit, standing in front of paintings by Tunji Adeniyi-Jones and Juanita McNeely that make you think of paint as bodily fluids. “It was really important to me that it’s intergenerational” and not just “hot new artists, though we have a few of them, too,” added Deitch, who wore a beautifully brocaded ivory sherwani—“a souvenir from India”, he said. The crowd included the collectors Maria Arena Bell and Bill Bell; the art dealers Mary Leigh Cherry and Tim Blum; the artists who are in the show, like Ellen Berkenblit, Suzy Lake, Bea Nettles and Marnie Weber; and artists who could have been, such as Stanya Kahn. The opening had its witchy moments, including some wild posing by the French performance artist Sophia El Mokhtar in front of a large, spiderwebby sculpture by Michelle Segre that incorporated mushrooms and lotus root. And Trulee Hall made a dark walk-in cave-like sculpture covered with snaking phallic forms called Witch House. It felt warm and vaginal inside, making you and your friends feel for a moment like a coven. Meanwhile, the real coven stood outside the gallery smoking, as always. 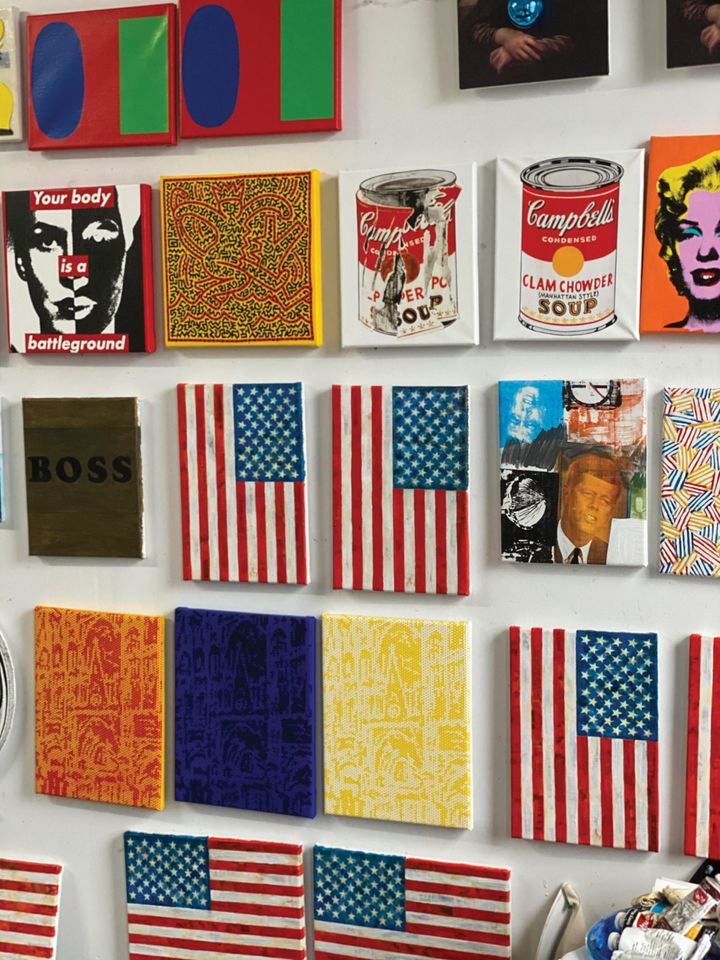 Eric Doeringer: The Brode is on show at the Felix Art Fair Courtesy of Eric Doeringer and A Hug from the Art World

The Brooklyn artist Eric Doeringer is perhaps best known for the splash he made in New York last May with Christy’s, a show of bootleg copies of famous works that were being offered that month by an, ahem, august auction house. Now the serial prankster is testing his luck at the Felix LA Art Fair with Eric Doeringer: The Brode. Starting Thursday in a room at the Hollywood Roosevelt Hotel, Doeringer will ply multiple copies of more than 30 works of art in the collection of the Los Angeles philanthropists Eli and Edythe Broad. Presented by the Rental Gallery and the traveling gallery and online retailer A Hug From the Art World, the knockoffs of artists ranging from Andy Warhol to John Baldessari cost $1,000 apiece. “I hope they like it,” Doeringer says of the Broads. “I’m not in any way making fun of them or critical of them–it’s acknowledging that they’re major collectors.” The artist, who got his start 20 years ago hawking copies of contemporary works in the streets in Chelsea, emphasises that his multiple versions are each visibly unique in some way and demonstrably hand-made, begging the question, “At what point does a copy become an original work?” Or, as Doeringer puts it: “Why is a spot painting by Damien Hirst worth more than one by someone like me?” 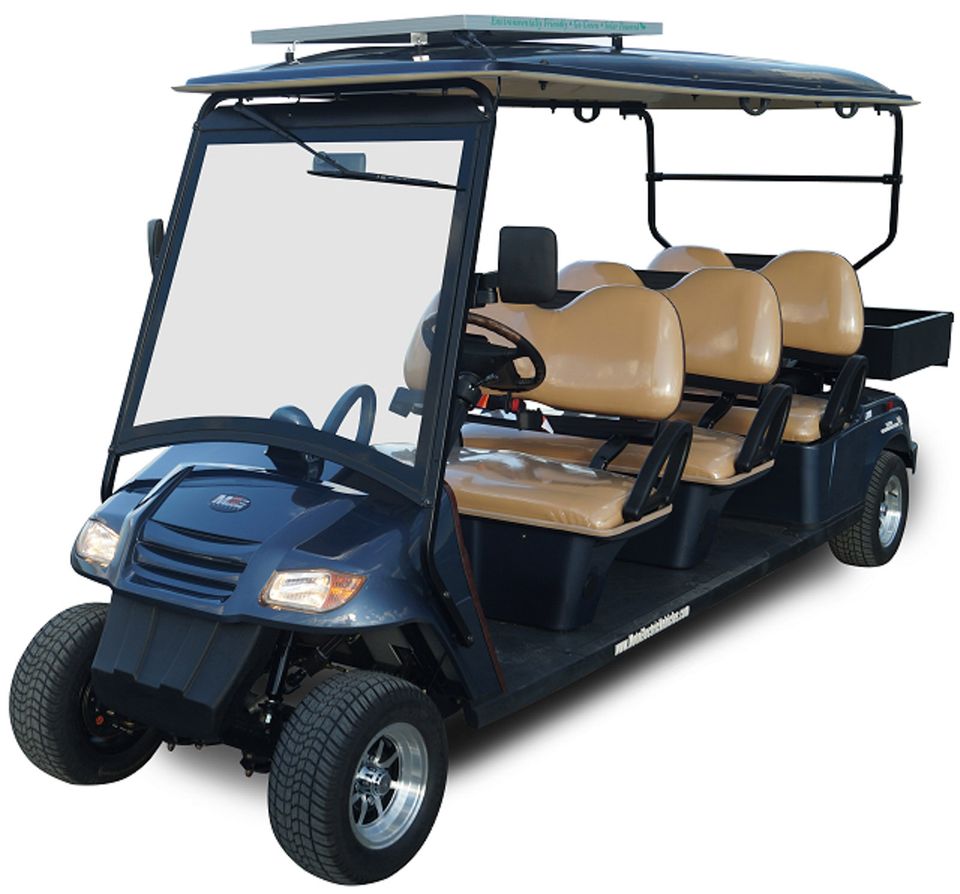 London’s Serpentine Galleries celebrated its 50th anniversary in style up in the hills above West Hollywood (the Bird Streets) at the lavish home of the film producer Sybil Robson Orr and her entrepreneur husband Matthew. Guests were treated to London martinis, spicy margaritas and champagne under the changing light of a newly installed Skyhouse by James Turrell. Bettina Korek, the Frieze Los Angeles director who will take up her new role as Serpentine chief executive in March, vowed to build connections between London and Los Angeles and praised the art world’s “global community” while the Serpentine's artistic director Hans-Ulrich Obrist said that he hoped “to welcome you in spring” to the gallery’s new season. Earlier this month, Obrist wrote in The Art Newspaper that for the Serpentine’s 50th year, “ecology will be at the heart of everything that we do” and also pledged to cut down on his emissions-heavy globetrotting (he contributes to a carbon offset fund when he flies). As guests left the house, chauffeured down the short driveway to the sounds of a putt-putting golf cart engine, this diarist wondered whether the art world (us included) will ever truly practice what it preaches. 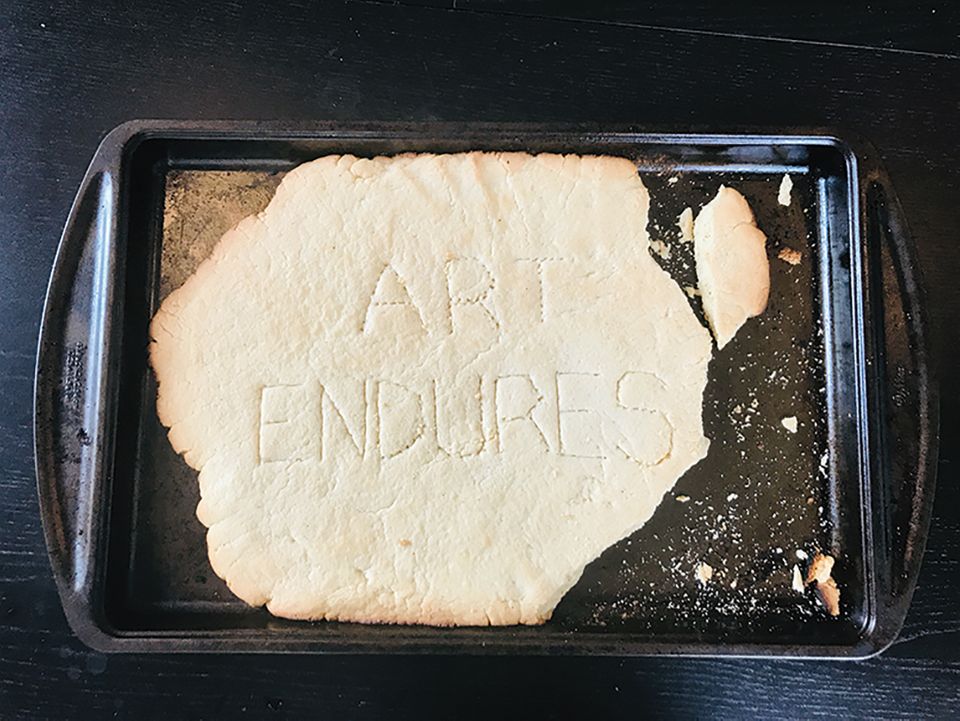 In the kitchen with Baldessari

Tributes to the legendary conceptual artist John Baldessari came flooding in last month following his death at age 88. An influential figure for generations of artists, especially those who studied under him at UCLA, he is famously known for burning all his early paintings and drawings at a mortuary in a performative act that signalled his transition to a conceptual artist. Out of the literal ashes of the destroyed work, he created Cremation Project (1970), which documents the event and remains in the artist’s estate, as well as a jar of cookies made with some of the burned paintings mixed in, which was donated to the Hirshhorn Museum in Washington, DC. But lesser known is another piece that Baldessari created that same year that is also cookie-based. According to the artist’s catalogue raisonné, Art Endures (1970) was presumed destroyed after its first display at the Montgomery Art Center at Pomona College. But the recipe for the work remains. So, to honour the artist, we recently baked up a batch of Art Endures, which turned out to be surprisingly tasty, especially if dunked in a cup of coffee. If you follow the recipe below for your own memorial to Baldessari, you’ll get enough dough for one large edition of the cookie, plus one artist’s proof.

1. Cream shortening. 2. Gradually add sugar. 3. Beat until light and fluffy. 4. Beat in eggs, nutmeg, extracts. 5. Gradually beat in flour until dough is stiff. 6. Knead on lightly floured board until smooth. 7. Chill one hour. 8. Roll out to 1/4-inch thickness on a floured board, a small amount at a time. 9. Bake on ungreased cookie sheets at 400° for 8-10 min. or cookie is golden brown. 10. Cool.