Frieze New York diary: Scarlett Johansson and John Krasinski arrive at the VVIP preview and more gossip from the fair 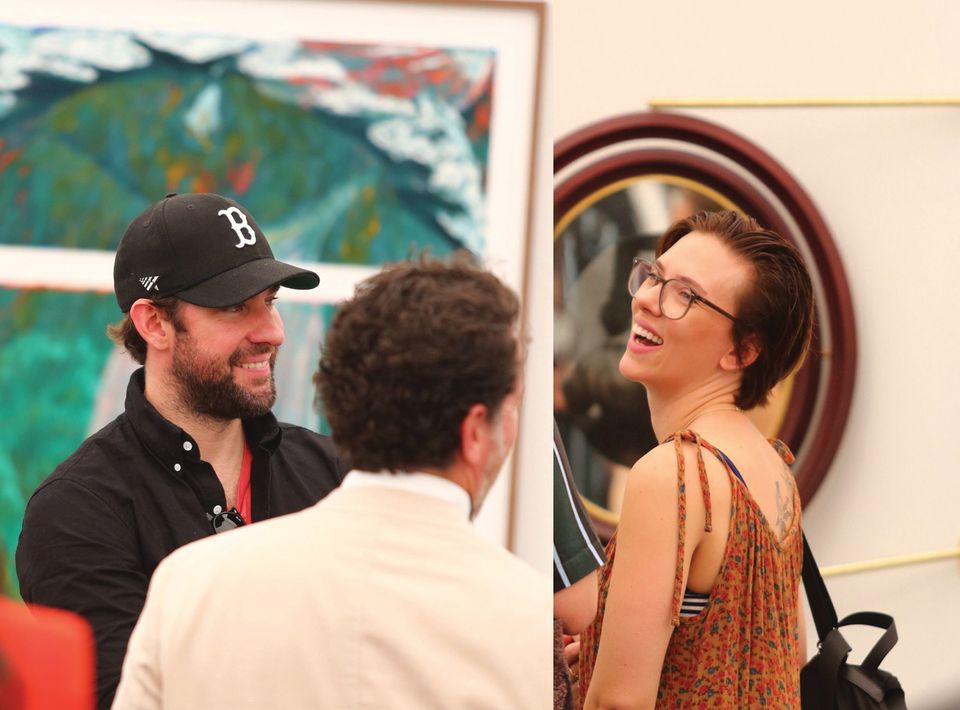 Celebs made an appearance at the (VV)VIP preview of Frieze New York earlier this week, mingling with mega-museum curators and directors such as Max Hollein, the newly appointed director of the Metropolitan Museum of Art, and Maria Balshaw, the director of the Tate in the UK. We spotted the US film star and The Office alumnus John Krasinski strolling the aisles with his friend, the artist Kaws. “Do you collect his work?” we asked, to which Krasinski replied: “Not yet,” before adding that he was relishing his first time at the fair. The screen siren Scarlett Johansson was spotted delivering gifts to Los Angeles’s Château Shatto gallery, where she took her time pondering paintings by the artist Van Hanos. Not spotted, however, was star collector and Frieze regular Leonardo DiCaprio. Perhaps the appearance last year of an army of Leo impersonators dressed as some of his famous film characters made him go cold. 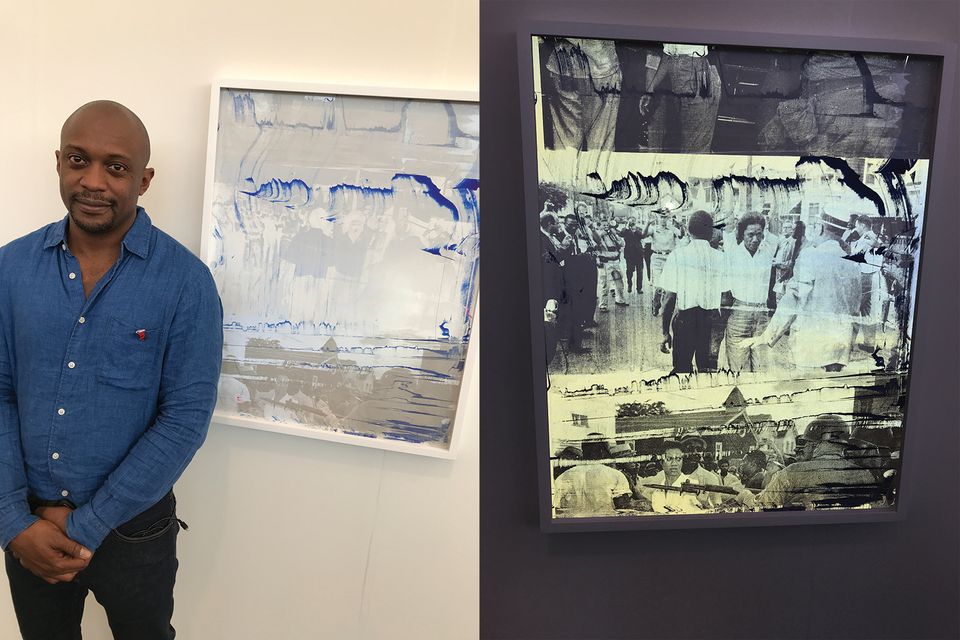 Seen in a flash

The US artist Hank Willis Thomas was spotted telling visitors at Jack Shainman’s stand that his work, I don’t remember them walking two steps behind anybody (blue tidal wave) (2018), needs to be seen in a special light—one that is typically verboten for art. The retro-reflective piece is activated by flash photography. Snap-happy fair-goers can access its hidden content—the civil rights leader Gloria Richardson brushing off a National Guardsman during a 1963 demonstration—using their mobile phones. “It’s like seeing history in a flash,” commented one impressed onlooker. Cue shudders from every museum warden tired of telling visitors “no flash photography”. 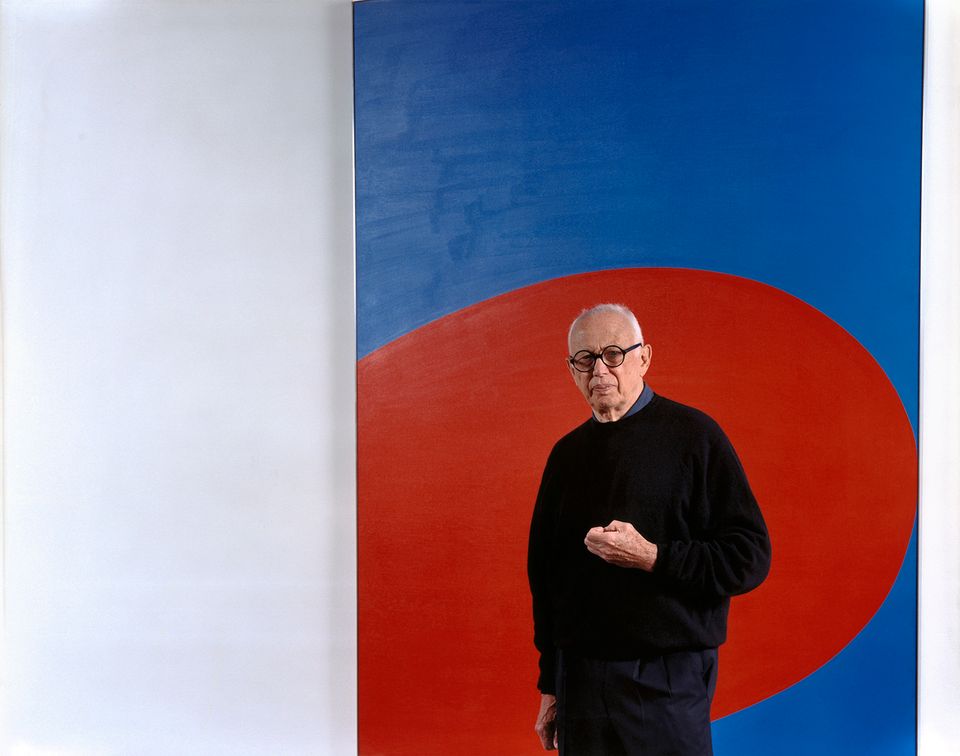 Portraits of the artists

Artists can be publicity-shy figures so seeing them caught on camera is always illuminating. Tina Barney’s photographs of Carl Andre, George Condo, Françoise Gilot and Ellsworth Kelly, on show at Paul Kasmin gallery, are a real eye-opener. The arty images were taken between 1998 and 2011 for magazines including Vogue and The New Yorker. Condo looks sheepishly into the camera, surrounded by studio detritus such as Evian bottles and pots of paint but “Kelly stands confidently in front of his work at the Whitney Museum of American Art,” a gallery statement says. Nonagenarian Gilot, meanwhile, is wearing a very fetching coat that matches the interior design. Class is in session this Saturday at Creative Time’s Bring Down the Walls, a collaboration between the artist Phil Collins and the Fortune Society, which advocates for criminal justice. Each weekend this month, a former firehouse is turned into a free "school for radical thought" by day and dance club by night. The first lesson, Origins of Control, from 2pm to 9pm is on the prison industrial complex, lead mostly by people who have experienced they system first hand, followed by Soul Summit, a “high-energy soulful house experience”, from 10pm to 6am. Electronic musicians and formerly incarcerated vocalists worked together to reimagine house music hits in an eponymous, pay-what-you-wish, compilation album that benefits Critical Resistance, whose mission is is to “challenge the belief that caging and controlling people makes us safe”. 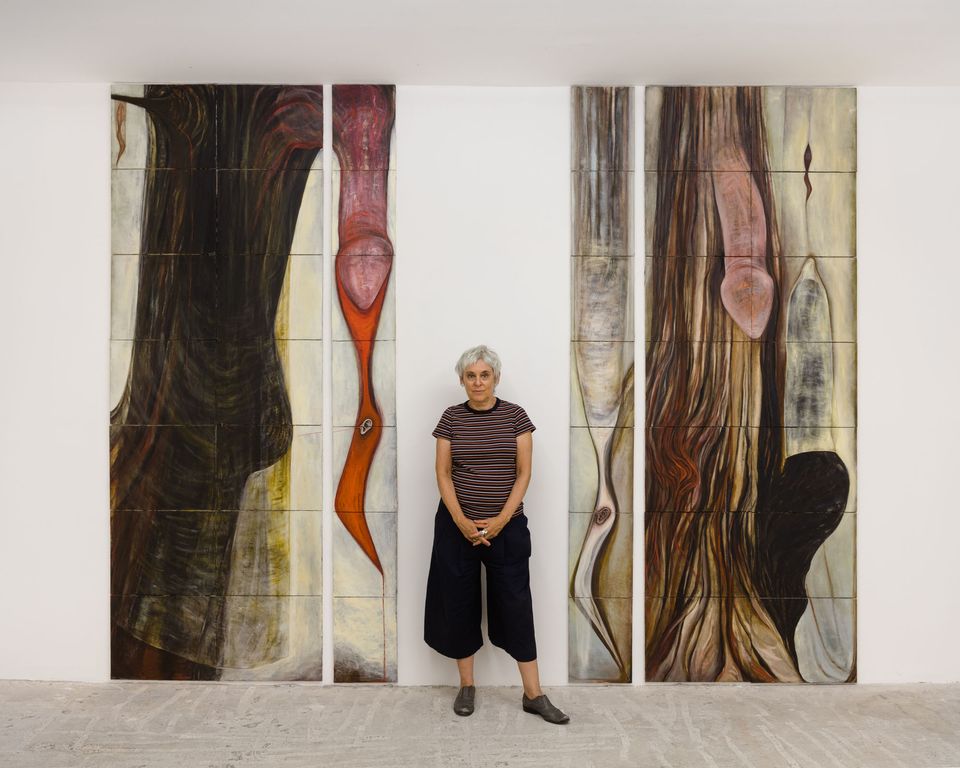 Mira Schor with her Dick Paintings

The impotence of the patriarchy

In the 1980s, the artist and feminist critic Mira Schor was feeling “newly energised by the return of pretty misogynist representations of women”, particularly in the work of painters like David Salle. She channeled that fervor into a series of wryly assertive paintings that radiate with shape-shifting phalluses and dreamlike ejaculations. The Dick paintings (1988-1993), which are being exhibited for the first time at Lyles & King’s booth in the Spotlight sector at Frieze, “seem very relevant now”, Schor rightly says. Active in Miriam Schapiro’s and Judy Chicago’s fabled Feminist Art Program at CalArts in the 1970s, Schor felt compelled to revisit the series after Donald Trump’s election (whom she describes as a “dick”). Acknowledging that feminist discourse has evolved since the 1990s—to include LGBTQ concerns, for example—she explains, “my belief that such a thing as patriarchy exists, run in large part by actual male humans for their own benefit, and my views about the importance of feminism as a gendered critique of power have not changed and still drive my work.”