Get your rah-rahs out: Paul Pfeiffer marches to a political tune at the Apollo 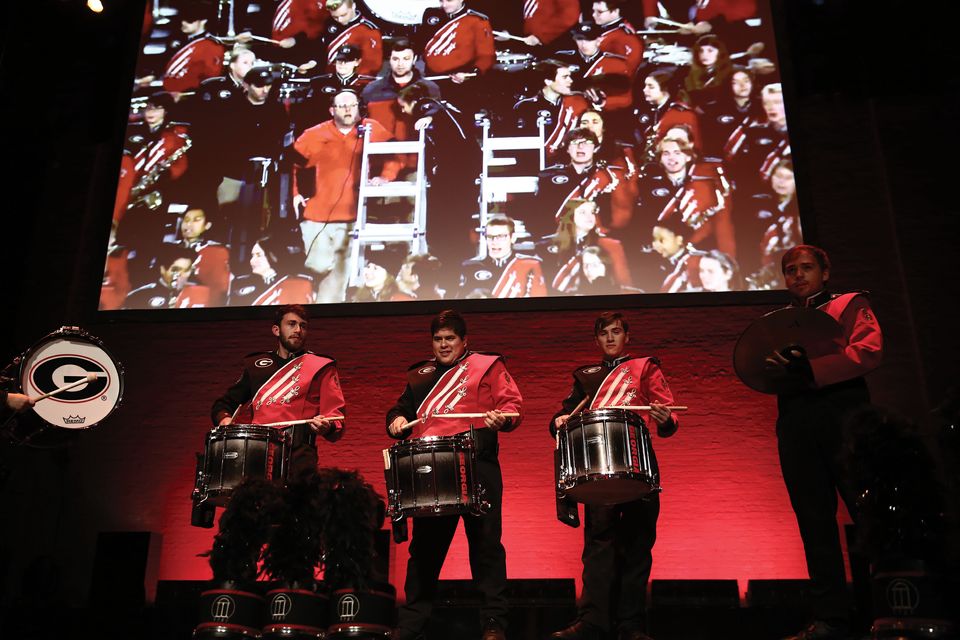 This is not the game known as football everywhere else in the world, called soccer in the US. Every high school and college student in 50 states grows up with this aggressive sport, where male athletes in crash helmets and bulging, protective padding compete for control of a pigskin ball in stadiums roaring with partisan spectators.

As public spectacle, it is a defiant, ritually enforced expression of fealty to both God and country. At college games, spectators are subject to emphatic cheerleading and the patriotic music of a disciplined marching band, making their response to the action on the field less spontaneous than calculated and undemocratic.

This irony was the heart and soul of Paul Pfeiffer’s collaboration with the University of Georgia’s Redcoat Marching Band, a commission for the 19th Performa biennial in New York. Like the game itself, it was a troubling experience that was also somehow liberating and joyful.

The date for this one-night-only event was as significant as the location: 11 November, Veteran’s Day, at an historic African American music venue, the Apollo Theater in Harlem. It didn’t take anyone present long to note that white faces far outnumbered black, both in the audience, on the home team (seen on video), and in the uniformed band, which is 400 players strong. Their job is to play music that will keep up the energy and induce a frenzy in the stadium crowd during the frequent lulls in the action. “It’s a 60-minute game played over two hours,” noted the Art Basel director Marc Spiegler, one of a number of art world figures present. 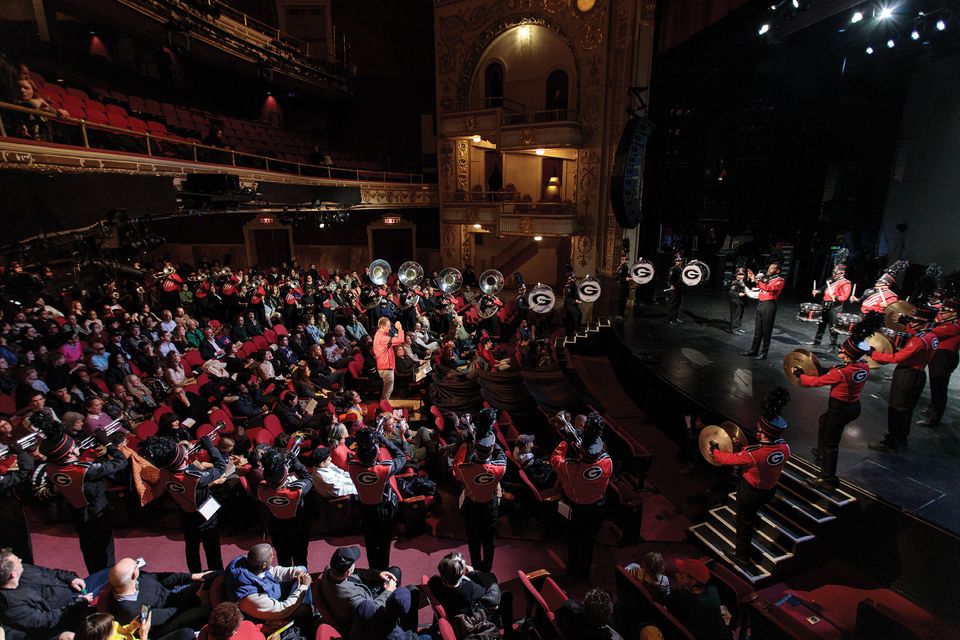 Fifty uniformed band members played live at the Apollo, drawing from a repertoire of patriotic and spiritual tunes that included the national anthem, the college theme song, and a repeated Battle Hymn of the Republic.

The drum corps that began the show took the stage while the blaring horn sections filled the aisles. (Thankfully, provided earplugs were not needed.) Though directed by a conductor, the pace of the performance actually was set by the other 350 musicians, live-streamed to a projection screen above the stage from their school’s empty stadium in Athens, Georgia. Their conductor timed each musical intrusion to a recently recorded game that she watched on a video monitor barely visible to the audience.

Sometimes, the audience heard the live music or the ambient sounds of an actual game; at other times Pfeiffer took out the sound to produce a silence filled by the band in the theatre.

As the concert progressed, the musicians moved backstage, to the dressing rooms, the green room, the lobby and the balconies. Ushers carrying placards that read “FOLLOW”, “STAND” or “MOVE” encouraged the audience to explore these usually off-limit spaces, as well as the stage. I have to admit that standing where so many music legends have played was a special and unexpected thrill. But it made me queasy to see many in the audience stand, unbidden, for the Star Spangled Banner, when no game was actually being played. I’m as American as they come, but I have never understood all the flag-waving at domestic sports events, especially when attacks on this country since 9/11 have come mostly from within. 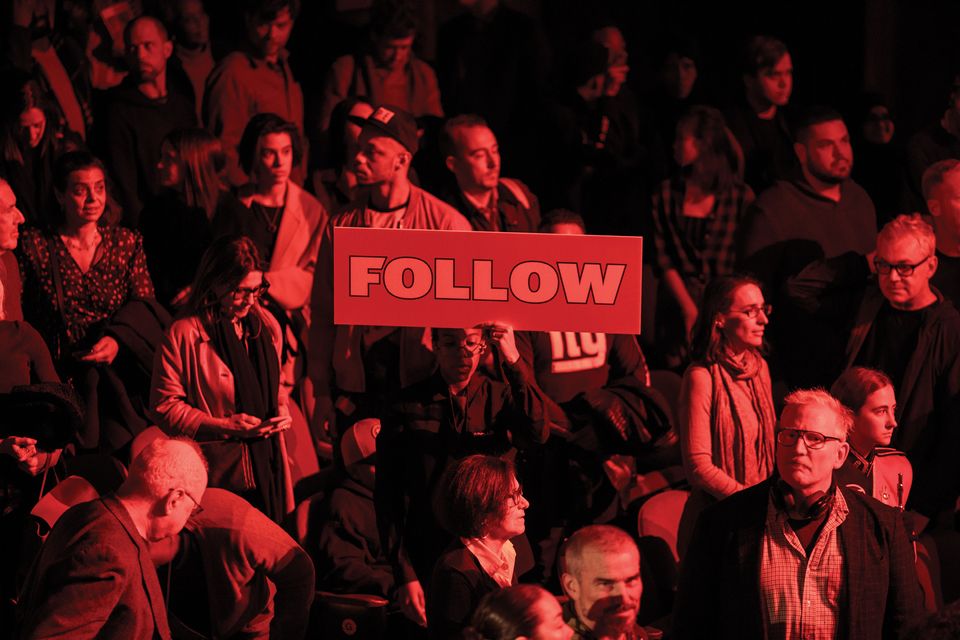 “They totally flipped the script on me!” Pfeiffer exclaimed, during a reception at the Red Rooster that followed the show. The band, he said, was supposed to play the anthem outside the theater and then march into the aisles to begin the “game”, which played to the imagination as the Redcoats stuck to their own, internal plan. They left out the Confederate song Dixie, banned since 1971 (when the word was also dropped from the marching band's name), as well as the theme from Gone With the Wind, their usual finale, deemed inappropriate for the Apollo, Pfeiffer said.

At the same time, the tug of war that Pfeiffer set in motion — between commanded and elected movement, the freely vocal and the forcibly silenced, patriotic fervour and propaganda, the virtual and the actual — made a powerful and inescapable metaphor for the destabilising forces at work in the country today. It also underscored historic and ongoing differences between north and south, and emphasised the control various media exercise over society as a whole.

In other words, it wasn’t just about a game. Politics and poetry were on the docket.

At the halftime point, I spotted Matthew Barney seated at the rear of the theatre. Because Barney has wrested visceral metaphors from football training methods, and shot the first of his Cremaster films in a stadium, I was curious to know what he made of Pfeiffer’s show. “I love it!” he said, with unqualified enthusiasm. “And it keeps getting stronger.”

That was true. It did, culminating in a choreographed rendition of the Battle Hymn of the Republic that featured a chorus line of supercharged bowing by band members, who suggested mechanised toy soldiers at a religious revival. 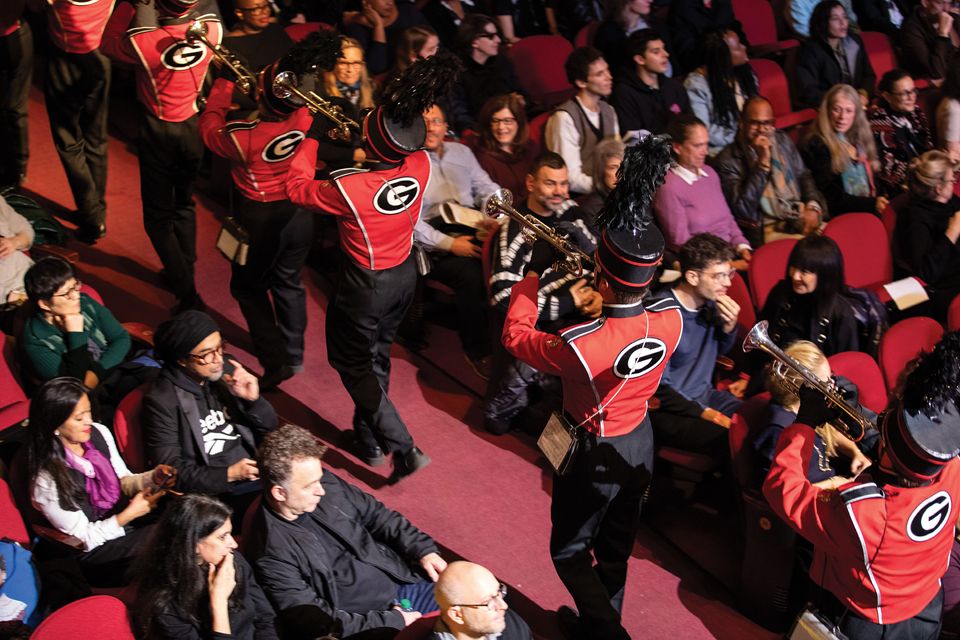 “The issues Paul deals with are so disturbing,” said Paula Cooper, Pfeiffer’s long-time dealer and the reception’s host. “His work is deeply philosophical and troubling, but this was brilliant. Just brilliant.”

Pfeiffer is well known for his manipulations of broadcast videos from professional basketball games and other sports, for which he employs sophisticated editing and selective erasures to point up social inequities that such spectacles mask. The performance, his first live work, developed during a two-year visiting professorship at the University of Georgia in Athens, and will result in a new video installation.

“Best Performa ever!” exclaimed the dealer Jeanne Greenberg Rohaytn, a board member of the organisation. But, as RoseLee Goldberg, Performa’s founder, told me, “We just did our usual thing.”