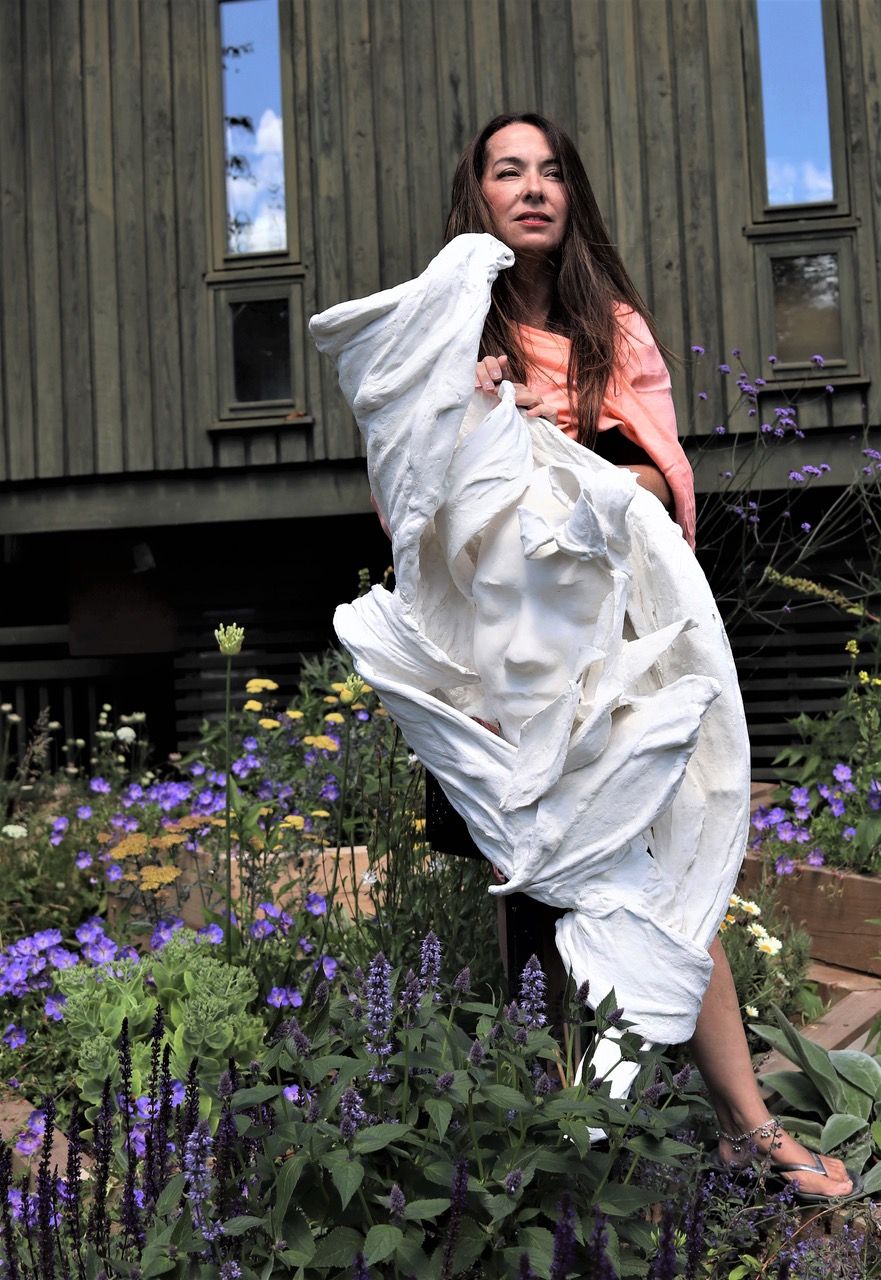 The therapeutic benefits of art are well known. And now a sculpture installed in the garden of the eco-friendly Horniman Museum in South London gives direct physical benefit for every living creature in its vicinity.

Flower Girl by the artist-physicist Jasmine Pradissitto is entirely made from NoxTek, a sustainably sourced ceramic geopolymer that absorbs nitrogen dioxide pollution from the air. The work depicts the face of a slumbering woman framed by swirling leaves. But this seemingly passive female performs the additional active function of being able to absorb up to 15% of her own weight in nitrogen dioxide molecules. When it rains, the absorbed toxins are washed away as a harmless liquid, enabling the continuous ingestion of pollution from the surrounding air. Given that the Horniman is situated next to one of London’s busiest roads, such repetitive gas guzzling is an especially valuable quality.

“Art is an amazing vehicle for change” Pradissitto says. She adds that she was inspired to make a work that “didn’t simply raise awareness but provided interaction” after spending a night in hospital with her son who was experiencing an acute asthma attack.

The full title of the sculpture is Flower Girl–For it was only upon the gentle buzzing of bees that she could awaken, the idea being that this sleeper will only regain consciousness upon hearing the sound of the work’s other major beneficiaries: the local bee population. For as well as dispensing poisonous molecules, another nasty by-product of nitrogen dioxide is its ability to mask the scent of flowers, thus preventing bees from finding their food. Situated among specially planted nectar-rich flowerbeds and the Horniman’s newly reopened bee hotel, Flower Girl’s cleansing properties are acting to clear a "scent path" and entice a greater population of bees to thrive in this hitherto inhospitable terrain.

Flower Girl and her bee-friendly surroundings are further confirmation of the Horniman’s pioneering role as one of the UK’s most environmentally aware institutions. At the beginning of the year the museum issued a Climate and Ecology Manifesto, in which its director Nick Merriman pointing out that the Horniman was the only museum in London in which nature and culture could be viewed together. It further stated that the manifesto's ultimate aim was “to create a movement for positive environmental change.” Now both humans and bees can breathe easier as they reap another advantage of this shift towards a cleaner fresher world—looks like the Flower Girl will be waking up soon.