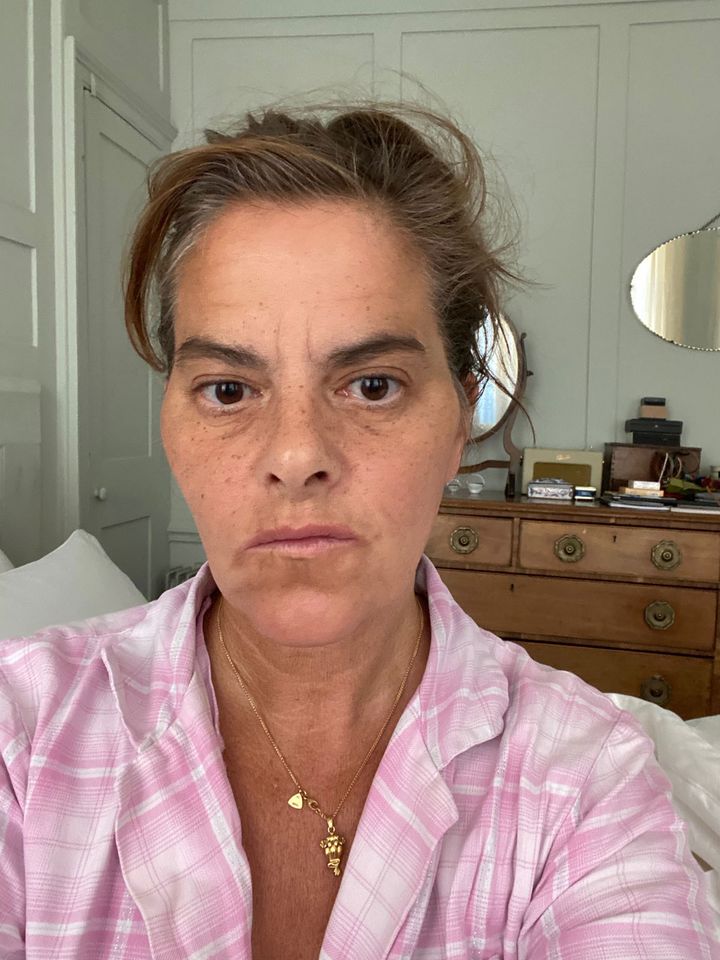 A self portrait of Tracey Emin, taken at her London home during isolation © Tracey Emin

Tracey Emin has had a good lockdown. “For me it was a dream not having to go anywhere, not having be anywhere or to see anybody. I just got more elated, more happy, more free and more open,” she declared in a free-ranging conversation with a Zoom audience during a virtual visit to her London studio last week. This interface with Emin was to mark White Cube’s online show of the paintings she has made over the past three months. The works offer an intimate view of the artist’s life behind closed doors—a positive experience that is reflected in the show’s title, I Thrive on Solitude.

The outcome of what Emin described as “probably three of the most amazing months of my life” is a series of ten small acrylic paintings on canvas, none measuring more than a foot in height or diameter and all featuring the intimate domestic spaces of Emin’s home in East London. Sometimes these rooms are empty, sometimes there are spectral figures fluidly painted in a predominantly blue palette, lying on beds, or reflecting Emin’s penchant for extended time spent prone in the bath: “I spent about eight hours in the bath one Sunday, just topping the bath up—it was amazing”. In one work it is possible to make out the shadowy outline of her recently deceased cat called Docket. In others, the casket that contains her mother’s ashes. Emin sees these intimate canvases as a new departure: “these tiny paintings are a little bit Impressionist, a little bit Matisse-y, but I’ve never seen anything like them before in my life. During [the Covid-19 pandemic] I’ve cracked another code for me and that’s exciting.” 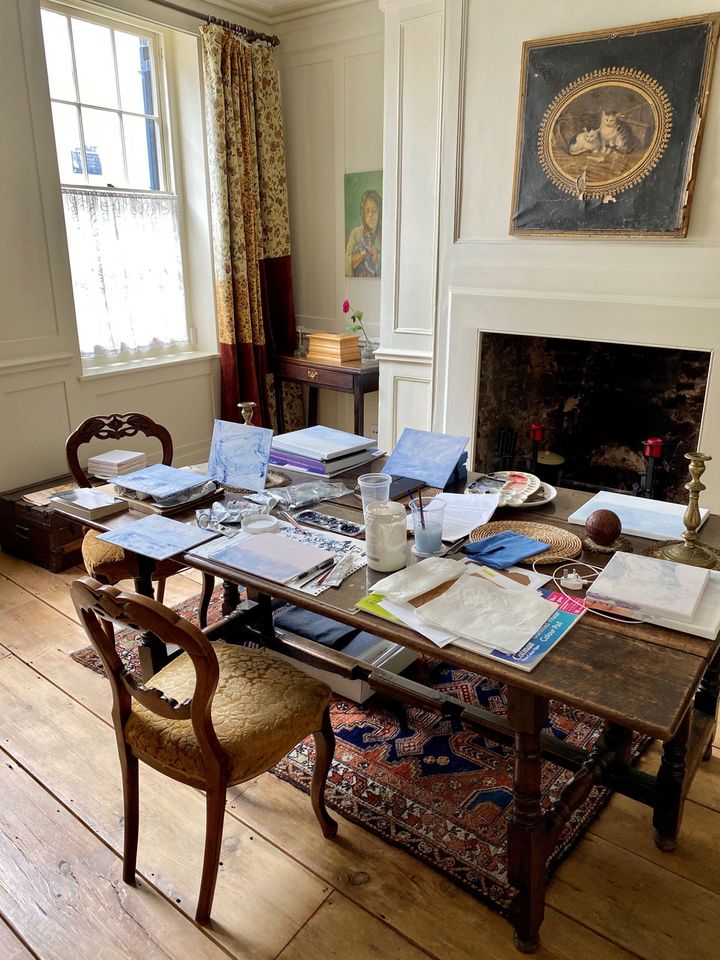 The exhibition also marks a moment of significant change for the 57-year-old Emin, who is about to move out of the 18th century house that has been her home for two decades. She will keep a London base, but in future will spend most of her time between her home town of Margate and her house in the south of France. “I wanted to make paintings of my house, to say goodbye to my house, to honour my home that has protected me for 20 years,” she explained. “Once I move from my house, everywhere I live I will be living with my work—that’s now my priority, every single part of my life will be art, art will be my everything, my lover, my salvation, that’s what I want as I get older.”

As well as making paintings during lockdown, Emin was also studying and sometimes reassessing the works of other artists. “When I was young, I thought it was Joseph Beuys who was more meaningful and shamanistic—he hangs out with wolves and wears a hat—and Andy Warhol was more just a Pop party boy. But Andy Warhol was a far more serious devout artist and Joseph Beuys is just a fucking pop star—that’s what I decided the other day.” Of her erstwhile collaborator Louise Bourgeois, Emin declared that “what I learned from Louise was that you can do what the fuck you like—you can make a giant black penis that goes across this room or a tiny beautiful little etching of a bird, no one tells you what to do as an artist. Louise was hardcore, she took no prisoners.” According to Emin, if Edward Munch, whose drawings in the Musée D’Orsay she recently exhibited alongside her own, were alive today “he would probably be making and directing really good artist films.” IN the Zoom call, a collector from Hong Kong asked whether Emin would have liked to be his leading actress. “No, I would have been his lover,” was her sharp retort. 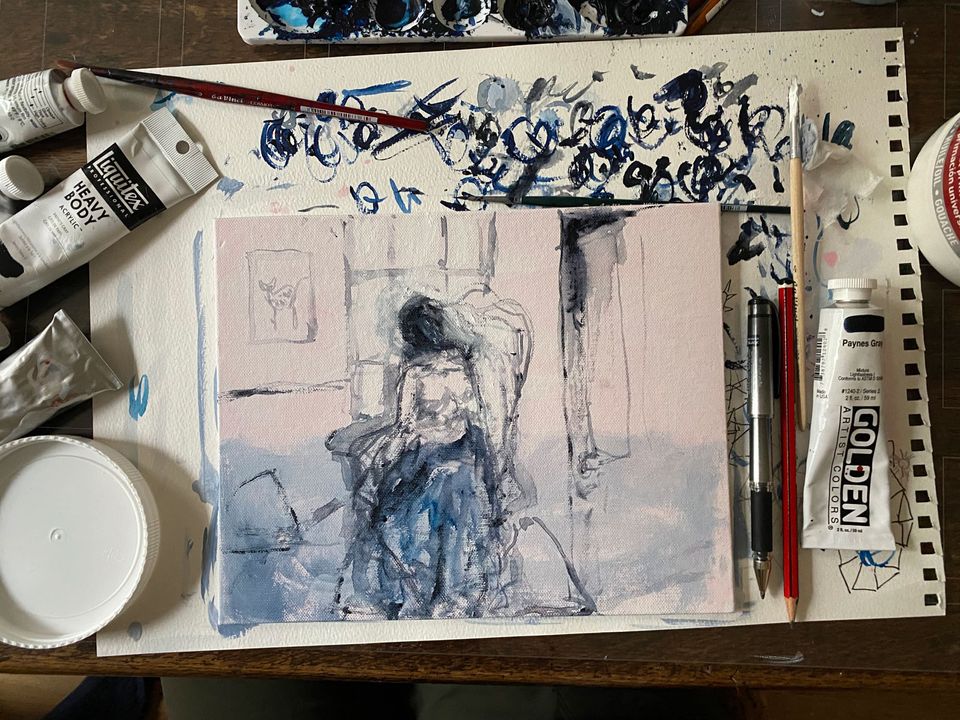 Now that lockdown is easing, and galleries are starting to open, Emin said she didn't want to see the art world return to the old normal. “I hope it will be less of a big carousel, with everybody flying all over the world and nobody looking at the art.” She revealed that she has been “banned from all art fairs” and hasn’t taken a long haul flight or been to the US for over two years. Spotting the White Cube founder Jay Jopling amongst her Zoom audience, Emin pointedly declared that “art fairs are not good for my gallerists, I don’t want them dying of heart attacks from jumping off planes every ten seconds. I’d rather they come and give me a studio visit!”

Judging from Emin’s current energised mood, there will be much to see when they do. “I’m in it for the long haul, this is the last stage of my life and I am really going to make the most of it,” she insisted. “I’m not going to fuck up like I have in the past. I expect my work to change dramatically over the next year and if it doesn’t, I will be really disappointed. I am very excited to be going into this new phase.”