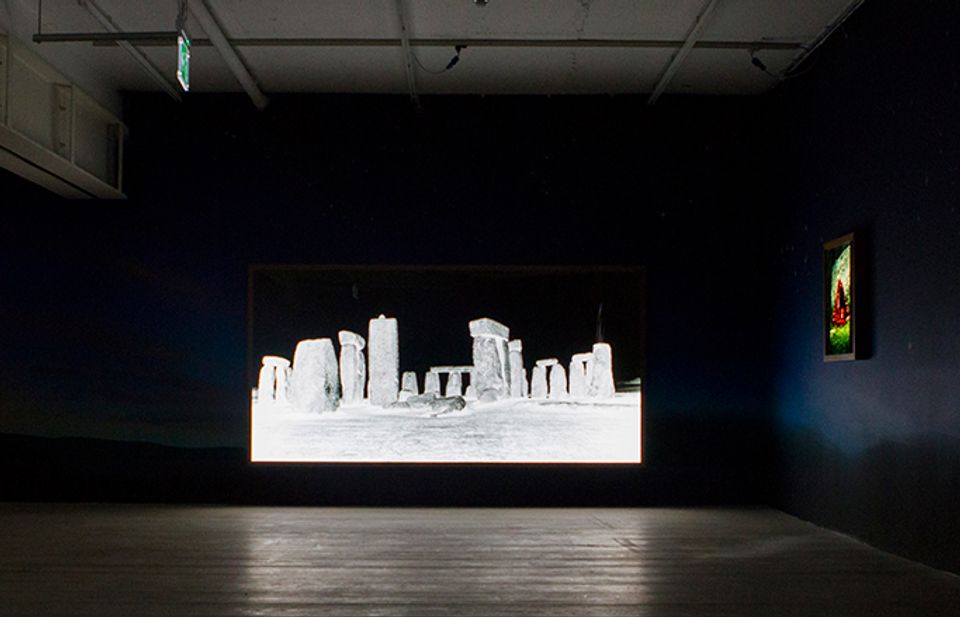 Jeremy Deller gave us a painted backdrop of gathering storm clouds and a ticking clock at last night's (16 January) opening of Wiltshire before Christ—his multifaceted collaboration with fashion brand Aries and photographer David Sims at The Store X 180 The Strand. This seemed particularly apt given that just down the road parliament was in the process of delivering a crushing defeat to Theresa May's Brexit plans.

As the results of the Brexit deal vote rolled in, the prospect of a government in chaos only served to ramp up the frenzied party spirit as fashion royalty including Roksanda Illinic, Luella Bartley and Giles Deacon caroused with artists and art-worlders Lisa Brice, Simon Periton, Tomma Abts, Princess Julia and Artangel’s Michael Morris to name but a few. All this took place amidst new films and sculptures by Deller, ancient artefacts borrowed from the Salisbury Museum and a specially designed range of t-shirts and assorted merchandise from Aries.

True to its title, all elements of this immersive experience formed a celebration of all things pagan and pre-historical, with a West Country emphasis. These included Deller’s giant dangling sculptures of flint axe-heads, a green neon Cerne Abbas Giant, a new film of snails, flints and Neolithic sites and photographic light-boxes depicting a David Sims fashion shoot made up against the stones of Stonehenge. Even though mere t-shirts were selling for upwards of £70 apiece, there was brisk business for the Aries collection—with your correspondent’s personal favourites being the hoodie emblazoned with the slogan "Make Archeology Sexy Again" and a t-shirt that declared: "Stonehenge, Built by Immigrants". Another top design—and Deller’s personal favourite—was the t-shirt bearing an open mouth populated by dangling grey choppers that simply stated, "Stonehenge, English Teeth".

As the evening wore on, much enthusiasm was also generated by a fulsome buffet of traditional English cheeses and pork pies. However, there was soon nothing to eat it off, with the specially decorated pre-historic themed paper plates being eagerly pocketed by the more straitened of budget (your correspondent included)—whose finances couldn't quite stretch to the official goods on offer. All in all, a deep and rich celebration of Englishness that extends both geographically and temporally beyond our current limitations.