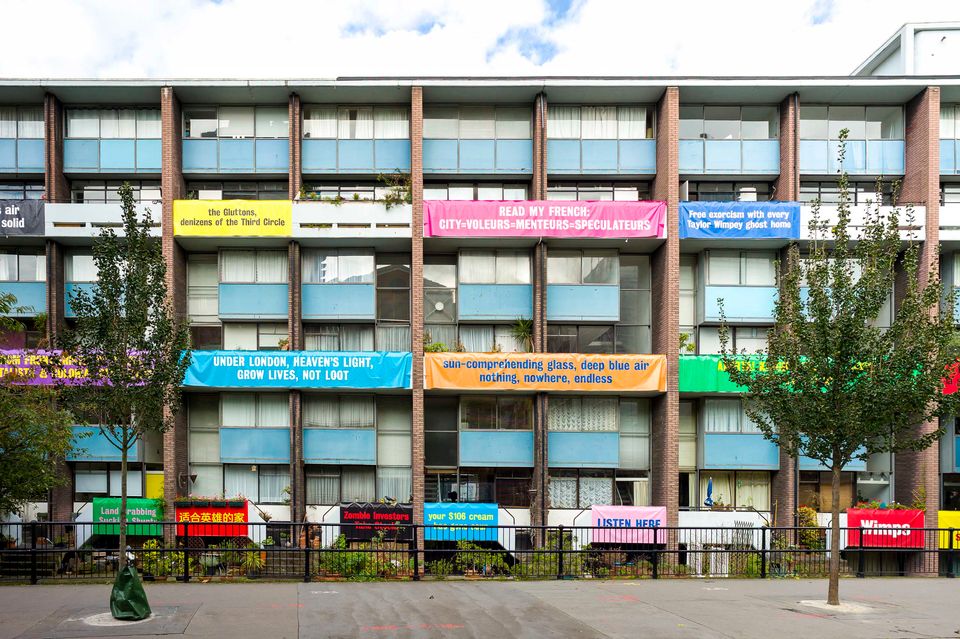 As property developers continue to suck the life out of London’s heart with what seems to be an endless infestation of overpriced, poorly designed and often empty buildings, it is cheering to learn that in one neighbourhood artists are joining forces with local residents to oppose this speculative free-for-all. Spectres of Modernism is an installation of protest art banners emblazoned with slogans by the likes of Jeremy Deller, Elizabeth Price, Gavin Turk, Cornelia Parker and Fiona Banner as well as authors Tom McCarthy and Ian Sinclair. These are emblazoned across the balconies of flats in Bowater House, part of a Grade II-listed 1950s council estate situated at the edge of London’s financial district and directly opposite the Denizen, the luxury-property developer Taylor Wimpey’s planned apartment block for the corner of Golden Lane and Fann Street.

Despite the fact that it will blot out 70% of the sunlight for the inhabitants of Bowater House—as well as a neighbouring school, a public park and a Children’s Centre—the Denizen has received planning permission from the City of London. If it goes ahead, the development will also entail the demolition of Bernard Morgan House, built in 1960. The Denizen also has no social housing provision. “The speculative boom that’s happening in this part of London and across the city is profoundly detrimental to the environment and the quality of life of all the people who live there,” says the project curator and Bowater resident, Clare Carolin.

The campaigners are currently examining a number of legal issues surrounding the development and the banners are remaining in situ on Bowater House until 10 December when they—along with additional specially-commissioned artworks relating to the project—will be auctioned to cover costs and support the Save Golden Lane Campaign. Meanwhile Carolin and the artists are keen to stress that anyone feeling similarly beleaguered by the march of the developers is welcome to help themselves to the slogans from the Spectres of Modernism website. People before profit: let the battle commence!