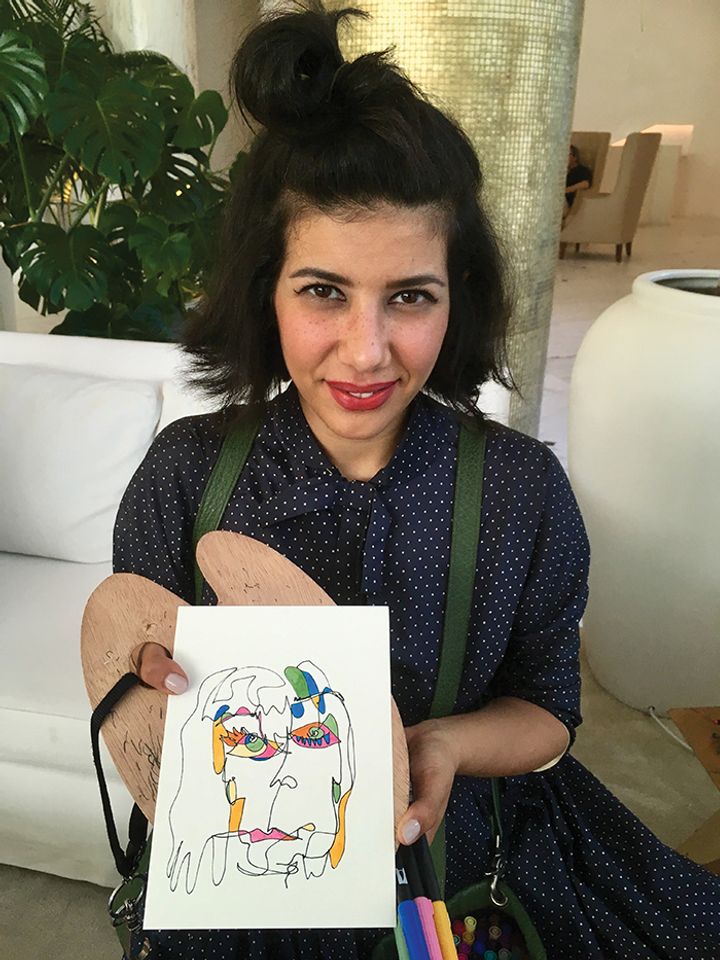 Moral Turgeman with her portrait of our intrepid reporter, Louisa Buck Louisa Buck

One drawn every minute

The artist Moral Turgeman is on a mission to create 10,000 unique portraits—in an economical fashion. Each work takes less than a minute to make and is drawn in one continuous line while the artist stares into the eyes of the sitter, never lifting her pen. “I call these a portrait of your essence,” she says. The artist, who has made nearly 4,000 of these works in the past six months in locations around the globe, is working in the Miami Beach Edition hotel lobby. Sitters must leave their “essence” behind for now, but Turgeman will give them their portraits once she hits her target, in exchange for a “collective humanitarian deed”. This, she assures us, will be something within each sitter’s means. The collective postage might prove dearer. 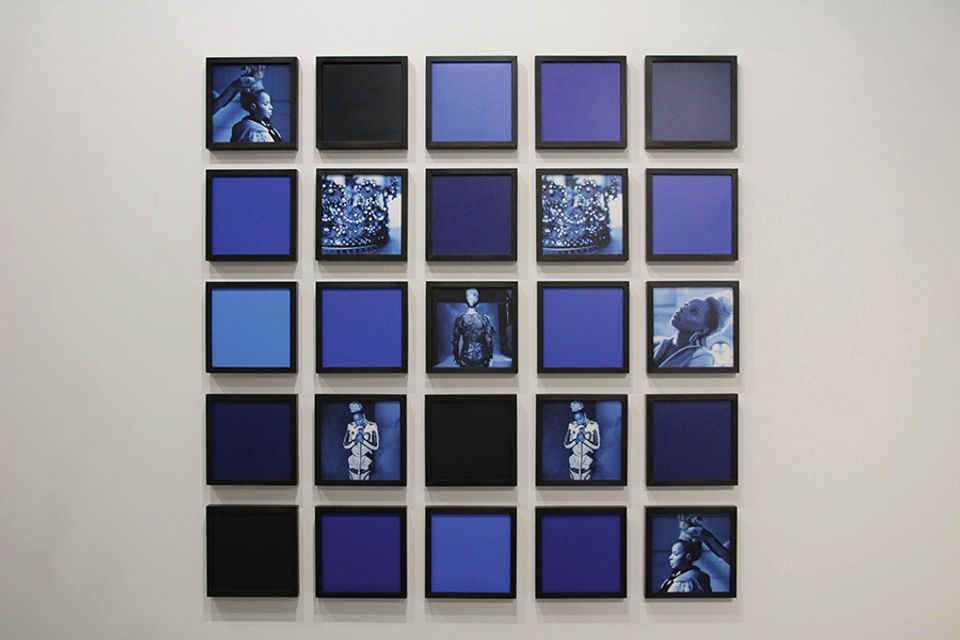 A grid of photographs of the R‘n’B legend Mary J. Blige, called The Blues, made by Carrie Mae Weems while she interviewed and shot Blige for W magazine, is turning heads on Jack Shainman’s stand. Blige has also recently drawn attention for her role as Florence, a sharecropper’s wife, in the new film Mudbound. “I didn’t realise how vain I was until I started working on Mudbound,” Blige told Weems. “[The director] Dee Rees was like, ‘You can’t have a perm, you’re going to have minimal, minimal makeup.’ And I was like, ‘What about lashes?’ And she said no, and I was like, ‘Really? Florence doesn’t have lashes?’ That part was a lot! A lot!” Blige obliged for the film, but appears as her usual glamourous self in Weems’s shots. 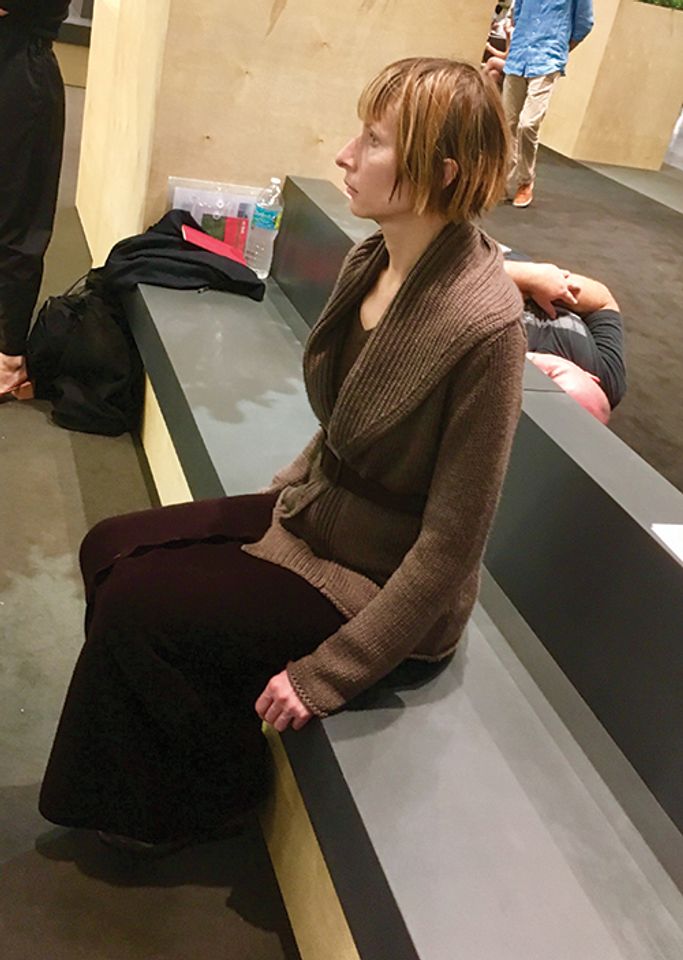 The prize for the spookiest stand at Art Basel goes to Chapter NY, transformed by the New York-based artist Adam Gordon into an empty room (save for an unpleasant-looking stain on the floor) and sealed off behind condensation-dappled glass. A mysterious woman, wearing a sombre brown outfit and an intense look, intermittently shows up and lurks around the stand. No explanation is given for her fleeting presence, but it has become a point of honour among fair-goers to spot—and snap—her before she floats back into the crowds. Perhaps she is a spirit for the Instagram era. 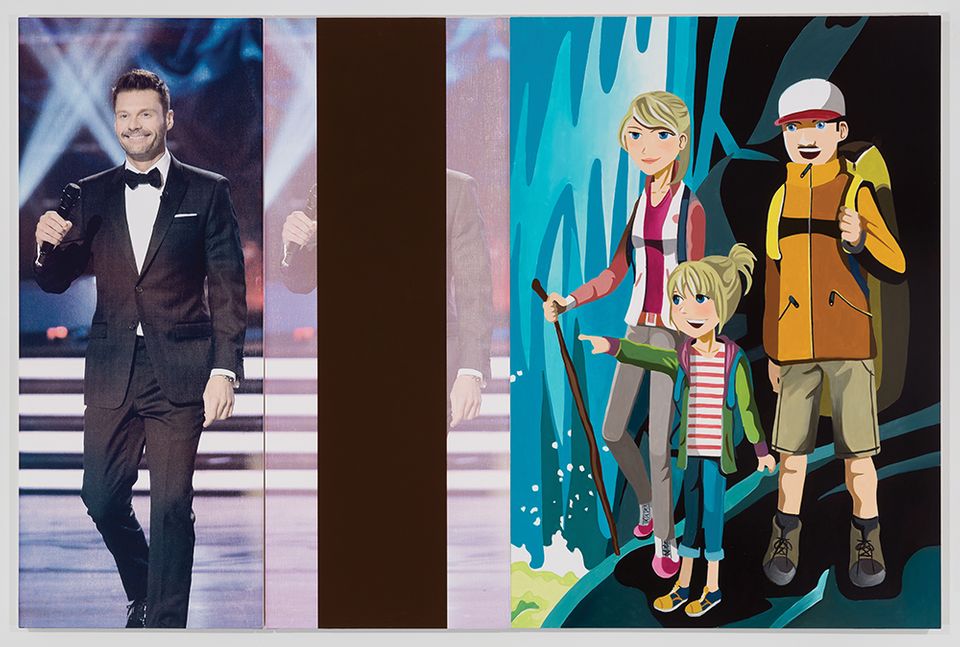 Ryan’s in the house—but not in the flesh

Shrieks were heard in the aisles of Art Basel in Miami Beach yesterday when a group of excited schoolchildren spread rumours that the television star Ryan Seacrest had been spotted at the fair. It was a false alarm, but the American Idol host does make an appearance in Julia Wachtel’s painting Vista (2017), on view at Elizabeth Dee gallery. The work shows a cartoon family standing next to a waterfall, gazing not at a landscape but at a repeated photograph of Seacrest on a stage. “The family exists in the space of culture, i.e. a computer, a painting, an art fair, and looks out appropriately into the space of cultural spectacle,” Wachtel says. Just imagine the shrieks if the kids had spotted Leonardo DiCaprio on Wednesday, when he made his usual appearance at the fair.