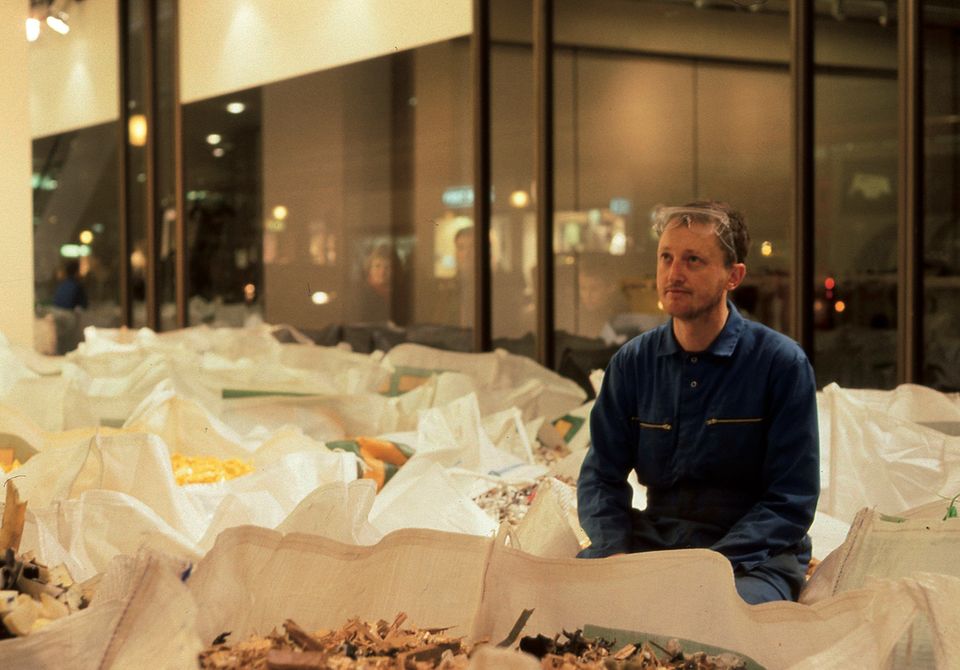 Break Down was a turning point for Michael Landy's career © Michael Landy. Courtesy the artist, Thomas Dane Gallery and Artangel.

Today marks the 20th anniversary of Break Down (2001), Michael Landy’s dramatic performance work that involved him pulverising all his worldly possessions—from a Saab 900 car to a single tea bag—leaving nothing but the clothes he was standing in. This epic act of destruction took place in February 2001, in the former C&A department store on Oxford Street in London. Using a specially designed facility, complete with conveyor belts and designated dismantling bays, Landy and a team of operatives sorted and then either shredded or granulated everything he owned, having first inventoried each of the 7,227 items. Eventually, the bagged-up remains, weighing 5.75 tonnes, were buried in a landfill site.

“It was like witnessing my own funeral," Landy remembers. “The experience gave me some very dark moments, but liberating moments as well, thinking how I could literally take things apart, and doing it in front of people so they could express their own feelings about their belongings and what was valuable to them,” he adds.

More than 50,000 people visited Breakdown during its two-week run and feelings ran high. “Madman at C&A!” shrieked the Evening Standard newspaper, while a number of Landy’s artist friends expressed their anger at his destruction of works they owned, and one former girlfriend stated her worries about his mental health.

Two decades on, Break Down is recognised as one of the most significant works of recent British art and a watershed in Landy’s career. To mark this anniversary, Landy discussed the work, its themes and its consequences in a live online conversation with James Lingwood, the co-director of Art Angel, the organisation which commissioned the work.

And from 12 April until 1 June, Thomas Dane Gallery is mounting a display of archive materials, including videos, promotional documents and some fascinating exploratory drawings which escaped the shredder as they were already in private collections. These early studies also confirm Landy’s longstanding interest in disposal, value, labour and human wastage, which was first fully expressed in Scrapheap Services, an earlier room-sized installation now owned by Tate, which presents a fictional people-cleansing company. The Thomas Dane exhibition also includes a box of photographs by Wolfgang Tillmans that document Breakdown, which he gave to Landy and which are being shown for the first time. 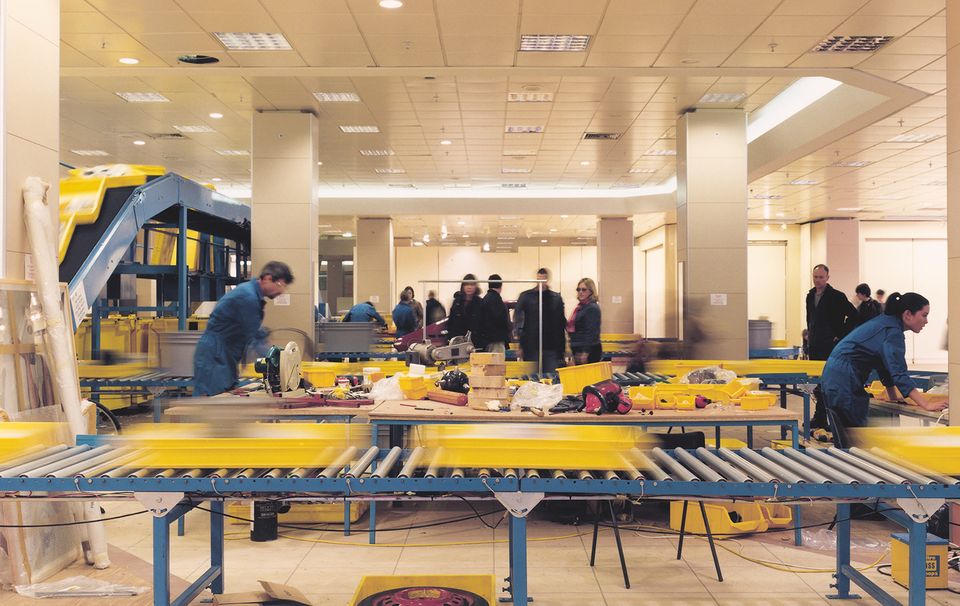 With the UK’s retail sector devastated by the impact of the pandemic, this revisiting of Breakdown is especially timely. Landy himself always intended the work to be not so much a cathartic act of personal sacrifice as an examination of consumerism and the power that our possessions have over us. “It was about me being one of many millions of consumers and how we create our biographies from all the stuff we own or possess,” he states. 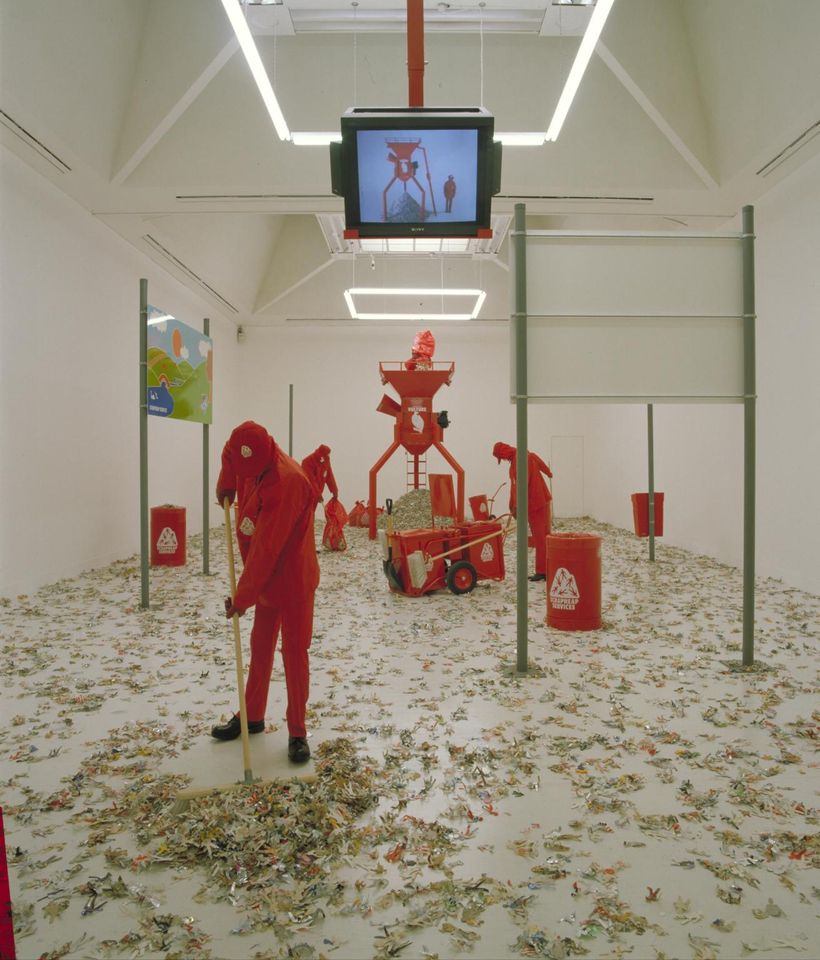 Two decades later, the market economy has been eviscerated by Covid-19 and we have been forced to examine what we value and why. The pandemic has made us reassess our relationship to our possessions and question the global markets that both fuel and are fuelled by our desire to consume. Why do we need all this stuff? How does it define us? And, in a time of ecological and climate crisis, how do we square our love of consumption with its impact on the environment?

Landy states that the idea for Break Down first came to him after he had sold Scrapheap Services (1995), to the Tate. “It was the first time that I had some money, everything up until then had been a struggle,” he explains. “But now I had a Saab 900 car, some disposable income and a Richard James suit, and suddenly I thought, what was this struggle about? And it literally popped into my head to destroy all my worldly belongings.”

For Scrapheap Services, Landy spent two years raiding tin banks and fast food outlet refuse sacks, recycling rubbish to make the multitude of cut-out figures that acted as a metaphor for wasted human potential. But for Break Down, on discovering that most of his possessions were designed to be discarded, he chose instead to highlight the unsustainability of these goods. “Some of it could have been recycled, but I liked the idea of it all ending up in landfill and me ending up with nothing,” he recalls.

Break Down was the ultimate dematerialised work. It was a production line in reverse, elaborately reducing something to nothing and intersecting the social, political and environmental with the personal. As Landy put it: “They were my belongings, and they weren’t any different from anyone else’s. That made it personal for anyone who looked at the stuff going round and round in the store.” Appropriately, the landfill site that forms the final resting place for all these destroyed goods is located in Landy’s native county of Essex and which, in an extra twist, is now a nature reserve.

Yet Landy is keen to stress that Break Down was not so much an act of personal sacrifice as an examination of consumerism and the power that possessions hold over us. “It was about me being one of many millions of consumers and how we create our biographies from all the stuff we own or possess. It was as much to do with people’s love of things and of different values and value systems.” 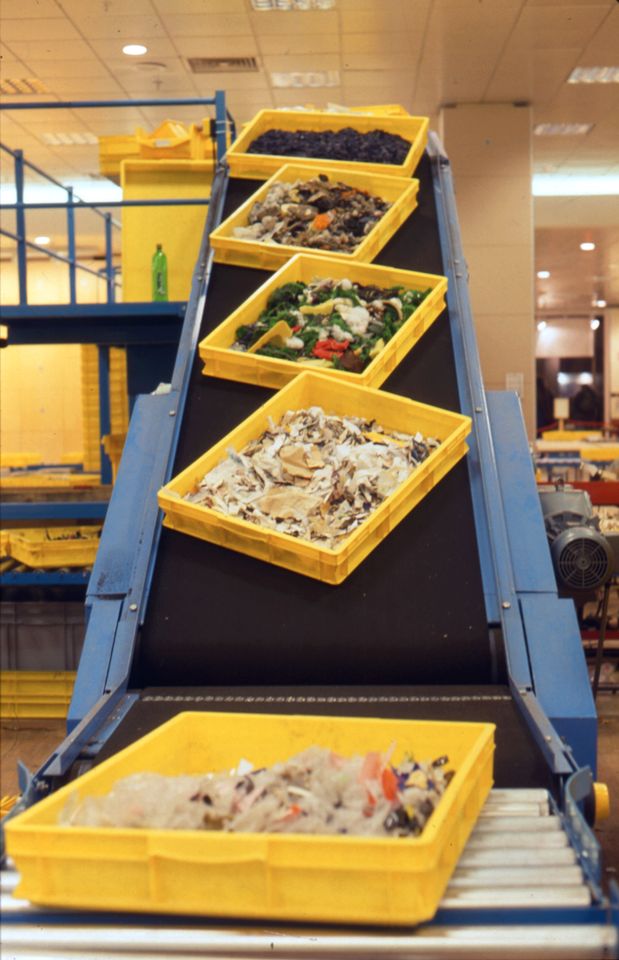 It then took three years of intricate planning and a partnership with Artangel and the Times to bring Break Down into being and to realise Landy’s ambition “to examine people's motivations about consumerism by literally taking things apart to look at the guts and innards of how things are constructed”.

But there was also a personal price to pay for such a draconian act. “I didn’t make any work for about a year afterwards—I found it very difficult to move forward creatively,” Landy reveals. When he did start making art again, it took the decidedly unspectacular form of minutely detailed etchings of common weeds. “I just have a dialogue with a plant,” he said at the time, “There are no phone calls, no making of lists; I have a plate and a metal needle that I scratch the surface with. I wanted to get back to actually making things.” 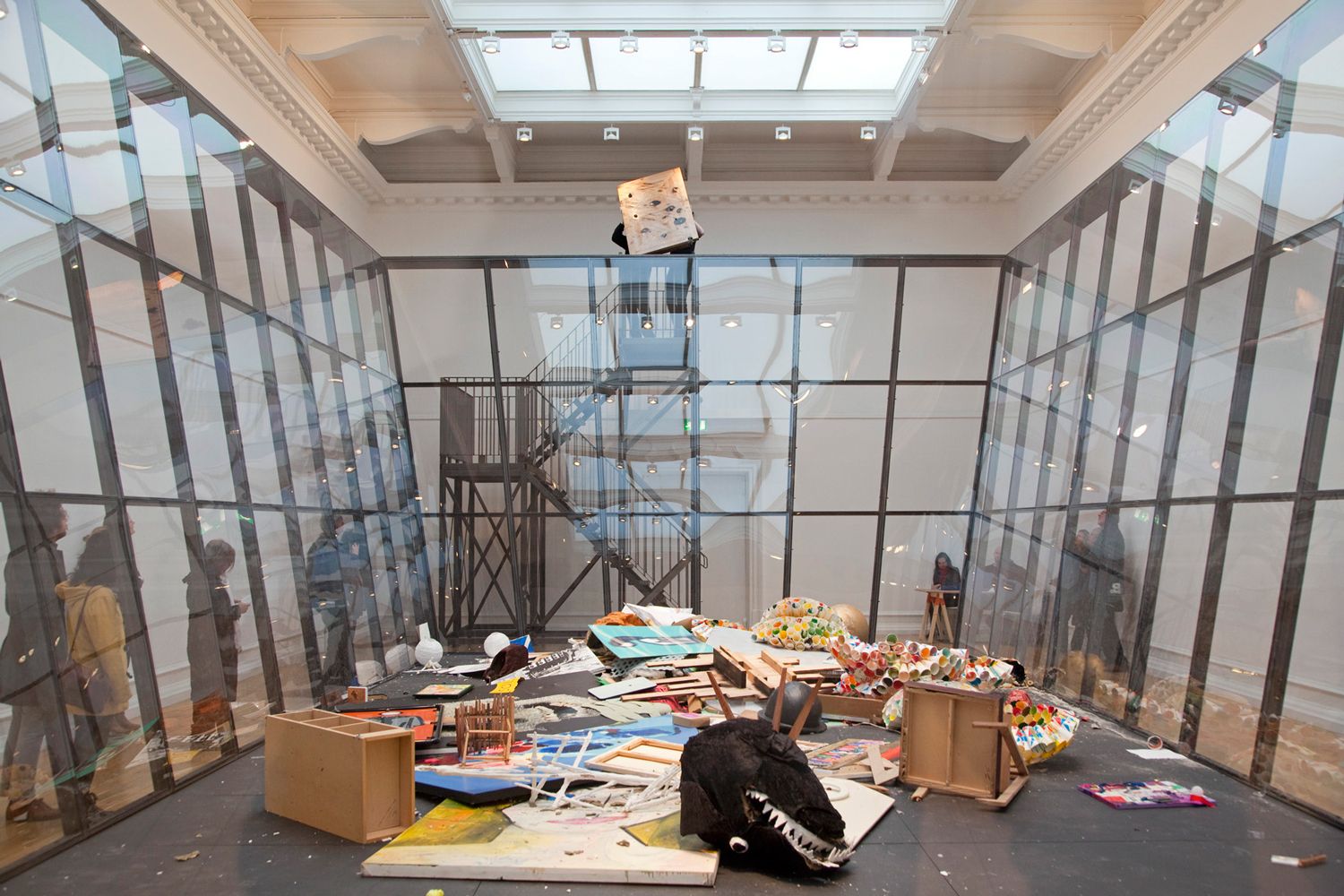 But then in 2010, Landy instigated yet another epic act of creative destruction with his Art Bin, a giant container installed at South London Gallery into which he invited fellow artists and members of the public to jettison the artworks they considered to be creative failures. Hundreds, including Damien Hirst, Michael Craig Martin, Julian Opie and Landy himself did just that.

Now, despite these various acts of catharsis, Landy admits that he has accumulated “much more stuff than when I did Break Down.” Which begs the question, would he ever be tempted to stage a repeat performance? He answers in the negative, but adds a caveat: “It would be good if someone would commission me to destroy all their worldly belongings, but not my own, I’d love to destroy all of Elton John’s worldly belongings—although that might take longer than two weeks.”

It is particularly ironic that we are able to reacquaint ourselves with Landy’s critical examination of consumerism due to our current government’s obsession with the mercantile. Under Covid-19 rules, commercial galleries fall into the privileged category of “non-essential retail” and are thus allowed to open, along with gyms and nailbars, on 12 April. Publicly funded museums, however, have been relegated to “indoor entertainment” and remain closed to visitors until 17 May. A society that values shopping over art points to another kind of breakdown—which retail therapy will not cure.