Now you see them, now you don’t: artist takes down sign paintings for the NHS 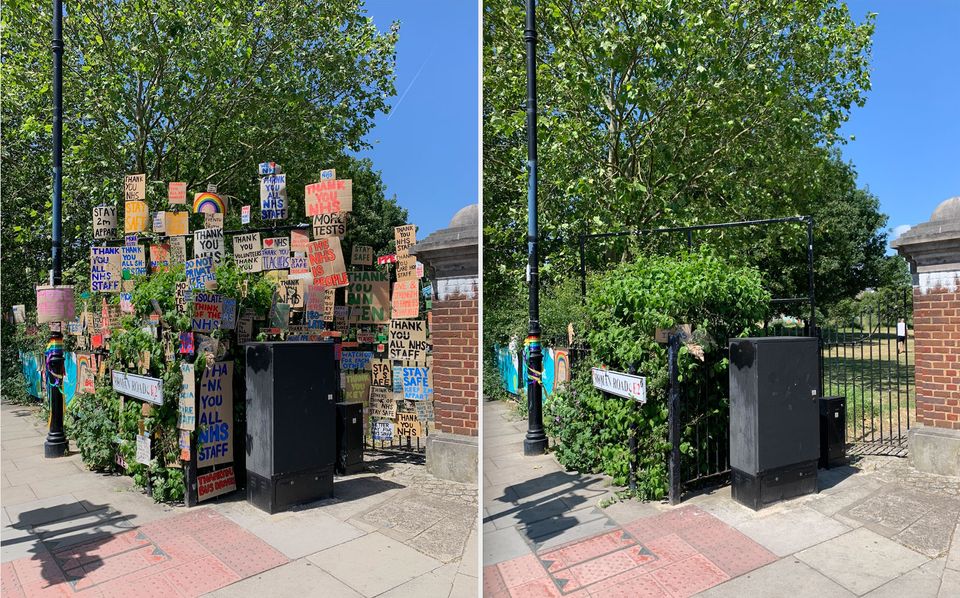 Declaring their support for the NHS in multiple phrases and colours, they were one of London’s most potent symbols of the coronavirus pandemic and posted across social media. Now, all Peter Liversidge’s handwritten Sign Paintings for the NHS, which over the weeks of lockdown had proliferated around the entrance to Wennington Green park in East London have gone. This vanishing act was not the action of the local council (who had made an initial attempt to remove them, but quickly realised what an unpopular move this would be) but that of the artist himself.

“There needed to be a full stop,” Liversidge says. “There’s nothing worse than having something like that get damaged, fade away and just disappear. It was important that the signs were a moment in time. But it was also important that they went. I wanted them to be a pure, apolitical and open thank you to those who usually go unthanked, who help us get through day by day.”

It took Liversidge and ten friends just an hour and a half to dismantle all 571 placards that he had been posting up nightly under cover of darkness since Easter. In what the artist describes as an act of “accidental perfect timing” these were all removed last Thursday night, just after Londoners had made their last mass clap for the NHS. “It wasn’t planned for that night, I couldn't get people to help me earlier in the week,” he says. “But when it was announced they weren’t doing the clapping any more I thought OK, this is the right time.”

However, Liversidge’s signs may be gone from the streets of East London but it turns out that they are too important a landmark to have vanished forever. Negotiations are currently under way for them to have a permanent institutional home, with an announcement due to be made later in the summer. For the time being though, they remain gone, but not forgotten.