Somewhere over the rainbow...London galleries are plastered with NHS support 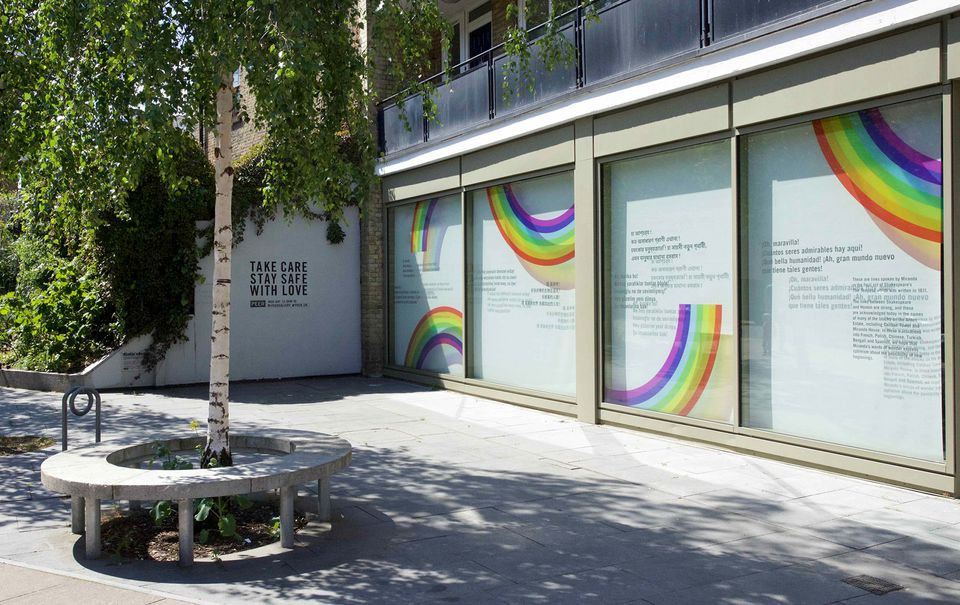 The outside of Peer in East London

Nearly two months into coronavirus lockdown and with the prospect of being closed until at least early July, London’s public institutions are beginning to find creative ways to wear their hearts on their walls and windows. First, was the National Gallery, which marked the early May bank holiday with giant projections of Peter Blake’s London Stands Together rainbow message across its façade. This was to support poster sales of the image and raise funds to deliver food to frontline charities, the vulnerable and National Health Service (NHS) staff.

Then last weekend Tate unveiled messages of thanks to key workers along Tate Modern’s rooftop light box and on banners across Tate Britain’s river front. In further tribute to the NHS, Tate Britain is also being bathed in blue light every night. In addition, Tate announced that it is now donating gloves, masks and suits from its conservation, art handling and curatorial departments to hospitals and emergency services in London and Liverpool and also distributing food stored in freezers to communities around its two London museums.

On a smaller but no less meaningful scale, Peer in East London is also reaching out to its surrounding communities. Way before the current crisis, Peer already had a reputation for strong local roots and meaningful interaction with its direct surroundings. Permanently in situ outside the gallery’s Hoxton Street premises is Black Hands, an illuminated clock designed by Chris Ofili and a public garden and seating in memory of the artist Khadija Saye, who died in the Grenfell Tower fire. Now, in response to the coronavirus crisis, the modest shopfront space has transformed its street-facing windows with a striking message of hope for everyone passing by. Across Peer’s 10m glazed façade, the now ubiquitous rainbow has been given a graphic reboot courtesy of Fraser Muggeridge studio (who work with many artists, including Jeremy Deller) and is accompanied by lines spoken by Miranda in Shakespeare’s The Tempest.

O wonder! / How many goodly creatures are there here! / How beauteous mankind is! O brave new world / That has such people in‘t!

The quotation also appears in Turkish, Polish, Spanish, French, Chinese and Bengali reflecting some of the more widely spoken languages in Hackney, a borough that is one of the most diverse in the UK and which also has the third highest Covid-19 fatality rate in the country. The choice of a Shakespearian quote is also especially appropriate for the area’s close historical and contemporary links with the bard. Shakespeare lived and worked in Shoreditch and Peer is located on the Arden Estate, named after Shakespeare’s Forest of Arden. Much of the neighbourhood housing is also named after Shakespeare characters, such as Caliban Tower and Falstaff House, and directly across the road from Peer is the Macbeth pub.

“Shakespeare is known to have continued working through outbreaks of Bubonic plague when it hit London in the early 17th century, and Peer hopes that Miranda’s words of wonder express optimism about the possibility of new beginnings,” says the Peer director Ingrid Swenson. She adds that The Tempest was a particular inspiration for this project “as it is widely held that the greater the storm, the brighter the rainbow”. Let’s hope.