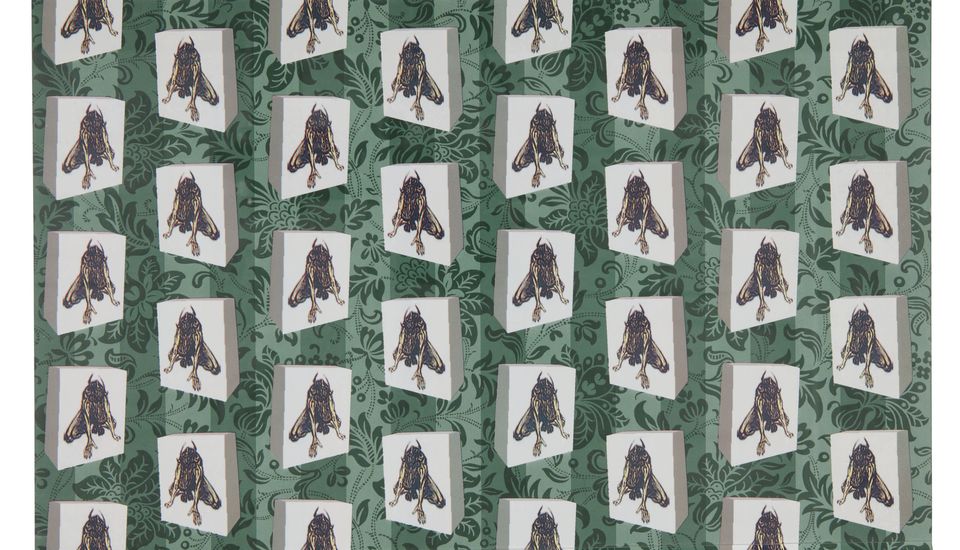 David Bowie was a man of (so many) talents but wallpaper designer is a new one on us. The Aladdin Sane pop star, who died in 2016, turned to the British homeware brand Laura Ashley in 1995, culminating in two wallpaper designs on offer in Sotheby’s online Prints & Multiples sale which is open for bidding from today until 28 April. The first design, entitled Conflict (est $25,000-$40,000), was conceived by Bowie for his debut exhibition, New Afro/Pagan and Work: 1975-1995, held in London in 1995. Bowie cleverly mixes a range of Brit art icons, featuring a nude image by Lucian Freud (Painter Working, Reflection, 1993) submerged in a formaldehyde tank, echoing many of Damien Hirst’s most famous creations (think of the shark).

But design number two, also set against a traditional English chintz pattern, ruffled feathers. Minotaur (est $20,000-$30,000) was inspired by Pablo Picasso but the racy bull-headed mythological monster did not go down well apparently with bigwigs at Laura Ashley. The company’s former communications chief says: “I had the dubious pleasure of informing Mr Bowie (his people, not the man himself of course) that it would be inappropriate for Laura Ashley to produce a wallpaper featuring the anatomy of a Minotaur and would he mind terribly adapting the design to something more… er… palatable.” Bowie later commented that: "It's been a good working relationship, apart from the castration, that is. They erased the Minotaur's genitals."